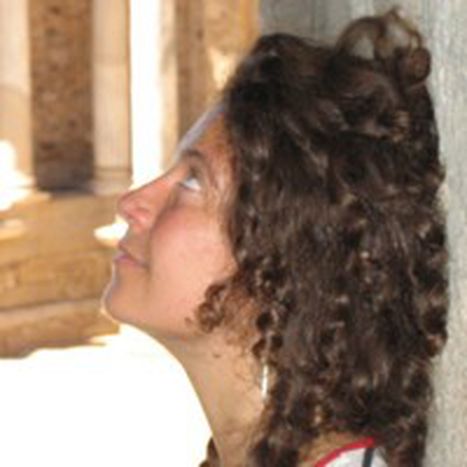 We are seated between palms and bougainvilleas in one of the garden terraces of Seville's Maria Luisa park. A mythical and unreal space, designed by famous French landscape designer Jean Claude Nicolas Forestier. It's inhabited by palaces, exotic birds and millenarian trees in which Peter O' Toole himself donned Lawrence-of-Arabian attire and was much brooded by over his Queen Amidala. The Sevillians go away, and the Japanese arrive, seeking comfort in groups in the shade. With the discreet hum of of their commentaries and the shouts of students who have just come out of exams, we continue our conversation.

Seville is not the capital of the world. Has Sandra Camps really moved here for professional reasons only? She shoots me a suspicious 'eh, I don't like gossip' glance, but smiles immediately after, relaxing and admitting with her small mouth that yes, personal reasons also contributed to her flocking south.

The journalist was born in Barcelona to an Andalusian mother. She began her reporter career in Berlin, where she had been a student. At 20, she even learned to dance Sevillan flamenco, 'because when you are far from your country is when you feel the most curiosity for it.' At 35, she's travelled around the world, her articles always focussing on those 'without a voice. The weak, the forgotten, from everywhere, who receive more blows in the life,' she confidently articulates. 'If I wasn't a journalist,' she declares boldly, 'I'd be a social worker.'

Between squalor and euphoria

She's got an air of Sigourney Weaver about her, although she's missing that intense hardness in her eyes. She's discussing the poor. 'I've never investigated the Dalit,' a much-despised Indian caste. 'They are so dignified in their abandonment. They are known as `the Untouchables’, because there is a myth that if you touch them you'll catch their misery and diseases.' She seems momentarily unable to drink her beer. 'The Dalit children don't even get the right to a glass of water, and live in separated districts. They earn a living cleaning sewers. A recently widowed-woman is confined to her house until the relatives of her dead husband make use of her: that is to say, prostitute her,' she comments serenely.

Camps knows how to tell the hardest of true stories. 'I get affected, yes, but I have created an armour by relating it to others. I did feel a strange euphoria in Nigeria. Lagos is a city in which the drama of the human impotence is spectacular and life does not have much value. The men threw money to me, because of my being white, thinking that I was a prostitute. There, the orphaned children live better. At least an institution is feeding and educating them. They always have a strange smile ready for the uncertain, cruel future awaiting them.'

Europe is a refuge

'We should all try living outside Europe for a while.' Her tone becomes caustic. 'Opening a tap, running water – they're luxuries we take for advantage.' Nevertheless, she does not think that voluntary work is the solution to help the Third World. Europe's role is in aiding its democracy, enable free choice and finally remove the misery there. 'When people emigrate to Europe they want refuge, not paradise. Freedom is that water running from the tap.'

Camps is a member of the Pen Club of Catalonia, a branch of the PEN Club International association of writers representing the 'conscience of world literature.' 'I am fighting for Seville to become a `city of asylum' for persecuted writers, as Barcelona already is,' she says. She leaves me, as makes preparations to fly to Clermont Ferrand. The French city is holding a short film festival, and she's been selected to represent Spain for her recent documentary on dwarfism.