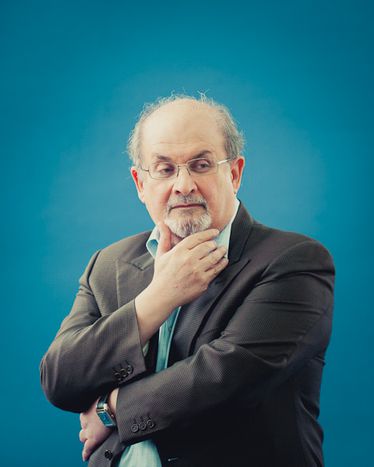 Salman Rushdie at Edinburgh Book Festival: 'We define ourselves by hate'

It is rather surreal to see the British Indian writer in the flesh. The 66-year-old is now so surrounded by legend - from the years he spent in hiding to a cameo in the British rom com Bridget Jones’s Diary - that he seems almost as fictional as his writings. He is at the Edinburgh international book festival to talk about good stories and a life in hiding

Salman Rushdie was forced to go into hiding after the supreme leader of Iran issued a fatwa calling for his execution on the grounds that his 1988 novel The Satanic Verses was an insult to islam. ‘One person said he thought the fatwa was a simply very bad review,’ he chuckles. ‘I think he was joking.’

Novels about islam and London

Rushdie inherited his interest in islam from his father, a non-believer who was nonetheless fascinated by the phenomenon of the religion. The writer demonstrates a respect for the faith which, given his experiences, he could be forgiven for lacking. ‘According to the prophet’s story of revelation, he saw a giant angel on the horizon. My father asked me whether I would have seen the same thing if I had been standing next to him. My answer to that is, ‘probably not’. And yet he’s not lying. Now, why is that?’

Rushdie came across the tale of the satanic verses, or the tempting of the prophet, while at university. ‘I remember thinking even then, ‘Oh, that’s a good story!’’ He chuckles, and pushes his glasses up his nose. ‘Twenty years later I discovered just quite how good a story it was.’

Nonetheless, Rushdie doesn’t see his novels as principally about islam. ‘Midnight’s Children (1980) seemed to me to be first and foremost a novel about London,’ he reflects. ‘It’s set at a time which we might now call High Thatcherism, a time of social unrest and racial discontent. Yet because of everything else, that aspect got blurred.’ He comments that quite often, when debating ‘state of England’ novels, critics say there aren’t any such novels about London. ‘And I say’ - he raises his hand like a schoolboy - 'excuse me, there is one!’ He chuckles, and then sighs. ‘Hopefully now that all that time’s passed we can just read the book as a novel.’

Bombay: A western city in the East

Despite this hope, Rushdie laments that we live in ‘a culture of offendedness’, which he connects with the rise of identity politics. ‘Classically we define ourselves by what we love – our families, our friends, our communities,’ he reflects. ‘Today we definite ourselves by hate. Nowadays, if nothing pisses you off, who are you?’

All too often, this come back to dichotomies of east and west, the islamic and the christian. ‘The conflict of east and west is the cliché of our time – this supposed culture clash which has actually been going on for centuries,’ he exclaims. He points out that the Indian city Bombay, where he grew up, was merely an archipelago of islands until the British colonisers developed it into a city and a port. ‘Bombay is a western city built in the east. I grow up thinking of east and west not as separate things but as intertwined in the same place. My writing tries to celebrate that.’

Towards the end of the reading, talk returns to The Satanic Verses. ‘I knew that conservative muslims wouldn’t like the book, but then it’s not compulsory to read a novel,’ he points out, and adds as an afterthought, ‘it should be though. It should at least be compulsary to buy them. Imagine that: fascist publishing that forces you to buy a certain number of books a year. Now that would be something.’