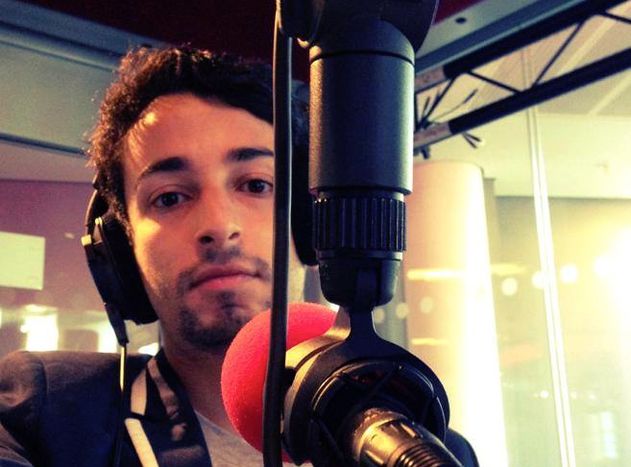 From blog­ger to Syria ex­pert for the BBC. Born in the United King­dom, from a Yemeni Ara­bic fa­ther and an Eng­lish mother, Sakhr Al-Makhadhi grew up in the midst of news­pa­pers and pol­i­tics. Today he has but one goal: elu­ci­dat­ing the Mid­dle East for the pub­lic.

The size and complexity of London is characterized by differences and distances, so Sakhr and I agree to meet for the interview half-way between Shoreditch and Farringdon, in Aldgate.  Together we head towards a Pret à manger and quickly launch into a passionate conversation ranging from journalism to the Syrian crisis, and, via the Arab Spring we move onto his family’s background.

To explain why he became a journalist, Sakhr starts by telling his own story. ‘I was born in the United Kingdom, but I am of Arabic origin. The Middle Eastern world and culture have been at the centre of my life from the very beginning. My father was a politician and so I grew up listening to news about what was going on in those countries. Early on, I understood that there were stories that were never told and others that, although they were told, were told far too superficially in the West and to the UK public. These stories deserve to be told.’

Sakhr eventually graduated in International Relations. ‘I really wanted to gain academic knowledge of Middle Eastern politics. After my studies I spent a year in Syria studying Arabic, since growing up in the UK, I had never learnt it properly.’

In the end, his choice of profession was based as much on his family background as on the reality he saw on television. 'I grew up in the 80s, a period in which Channel 4 was experimenting a lot and really changed the way television was made. My father was involved in politics at the time and the phone was always ringing. I heard him talk politics in English and Arabic and I was watching the news in both languages.’

As he speaks, I realize that we both belong to a ‘second generation’; with a Yemeni Arabic father and an English mother, Sakhr is also linked to two different worlds and contexts. Sakhr’s connections to both the Western world and the Arab world provide him with a new and original perspective on the Middle East.

Watch one of Sakhr's BBC interviews:

Before landing a job at the BBC, Sakhr went to Syria to, ‘collect stories of the Arab world, to meet local artists and youngsters,’ stories which he brought back with him. During our meeting our connection keeps getting stronger. There are no established patterns or entrenched perspectives at play, just our common global gazes. Sakhr’s, based on experience and generosity, and mine, grounded in curiosity and fuelled by an appetite for discovery.

Given the important role the country plays in the region, the choice to document Syria was not one Sakhr made casually. Besides, he felt there was, ‘a lack of information about the country in the British media; probably because Britain has never had any colonial ties to Syria.’

Upon his return in Britain Sakhr started writing a blog; a choice that would eventually prove to be very successful. It suddenly took him right to the centre of British TV journalism. Following his first appearance in the BBC studio, he received the encouragement he needed from the editor, who urged him on, ‘if you have more stories- other perspectives that we have not considered- please let me know.’

Since then, everything Sakrh does has revolved around Syria. He speaks about the difficulty Syrian journalists face, being constantly threatened by the ‘islamist regime’. When it comes to the Arab Spring, he prefers to leave the labels aside. ‘We still don’t know what the long-term consequences will be, but I believe there are positive aspects:  now activists can coordinate efforts to involve citizens more actively in different countries.’ He draws parallels between current uprisings in Turkey, Brazil and even the Occupy-movement in the West.

Receiving recognition and influence changes everything and his journalistic work has become more demanding. ‘There is more fact-checking; every sentence has to be verified more than once, it’s part of my job as a journalist.’ Though he doesn’t have a crystal ball, Sakhr dreams of a future career as a correspondent for Al Jazeera English, Channel 4 news or for the BBC, and he hopes that Syria will finally get the media coverage that it deserves. A future ambition of Sakhr’s and one that will require even harder work is to cover his family’s homeland, Yemen. ‘There are very few journalists reporting on Yemen, partly because of the danger involved in visiting the country as a journalist. But the truth is that it has always been a country off the media radar, and few people know enough to understand its context.’

Sakhr concludes the interview by giving me a beautiful definition of journalism;

‘We are merely transmitters between people without voices and people who want to listen. We are not bigger than the stories we tell and we must never be.’

This interview is part of Cafebabel’s 2014 Syria Dossier, which contains 5 different articles dedicated to Syria, published in 6 languages.