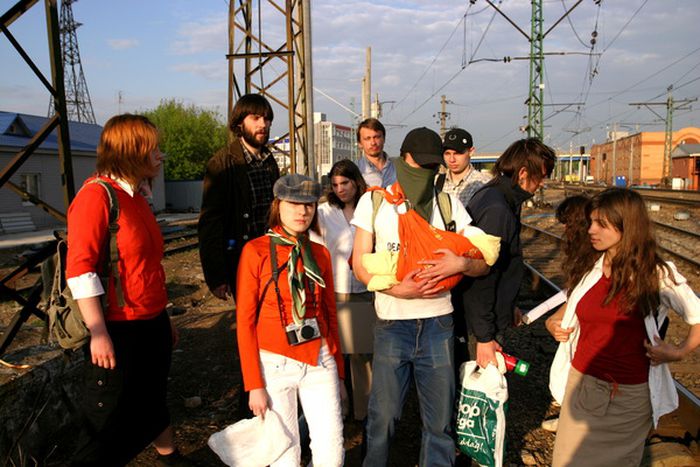 Part one of an exclusive interview marks their brief history

How did ‘Voina’ start?

Vor (aka Oleg Vorotnikov): I graduated in philosophy from Moscow state university (MSU). Koza has a PhD in physics and she is affiliated with the sub-department of molecular physics at MSU. Leo is the only one without a college degree. He's just naturally gifted. I envy him a little bit. Koza and I had been living off the grid in Moscow for ten years and had renounced the use of money for seven of those. We declared that food is a right, not a privilege, and so refused to spend money on it. In fact we never paid for anything at all. We were interested in social practices in the urban space, the 'how' of living in one of the world's most expensive cities while refusing everything that is being forced on us as necessary. Gradually, we renounced everything 'human': a home, wealth, jobs, careers. In Moscow, all of those niceties depended in one way or another on loyalty to the current regime, which can only be characterised as cannibalistic. We loathed the regime. We lived in attics and we spent nights in hallways and classrooms of the university. In summer we slept on the streets. We call it the ‘no-whoring way’.

Koza (Natalia Sokol aka Kozlenok): This way of life eventually produced our first exhibition of street practices, which took place in the cult art centre DOM in Moscow. The exhibition's opening in May 2006 marks the starting point of Voina's public existence as a street art gang. Our adventurous, criminal life received an aesthetic formulation. I named the group after my man. 'Vor' sounds like 'war', and 'war' in Russian is 'Voina'.

Vor: Our whole life is also an endless war, a war against philistinism.

Leo the fucknut (aka Leonid Nikolaev): Our main enemies are the corrupt police and the Russian regime, as the epitome of aggressive philistinism. In the Russian criminal culture, there's a word for an aggressive philistine: zhlob. It's the zhlobs who are in power in today's Russia. They are cops in priest's cassocks. They have hijacked the country just to be able to stuff their pockets with dirty money. Essentially it's a triumph of police state mentality and right-wing reactionism under the guise of faux patriotism. A zhlob's kingdom. So we are against zhlobs.

Voina is made up of over 200 activists. Is there also a core to the group?

Vor: The backbone of the group, its ideological core is just a handful of people. Right now there are 13 of them. The devil's dozen. I call them the real leaders of Voina. Kasper is our youngest activist. He was born on 19 April 2009 and has participated in every single one of our actions since then. His first action was Voina's punk concert in the Tagansky court in Moscow on 29 May 2009. This took place during the trial of art curators Andrei Yerofeev and Yuri Samodurov who were being prosecuted for organising the Forbidden Art exhibition at the Sakharov museum. We smuggled in electric guitars, a microphone and an amplifier into the courtroom. Then we interrupted the judge with a live performance of the song All Cops Are Bastards. Koza screamed into the microphone while holding the one-month-old Kasper in her arms.

Leo: Kasper is Russia's youngest political prisoner. He has been arrested three times by the Russian police in connection with our activity. On 31 March 2011 the police arrested Kasper in the street on Nevsky Avenue in the heart of St. Petersburg. They yanked him from his parents' arms by force and sent him to a hospital as an unidentified child.

Have you ever lived outside Russia?

Leo: We are Russian people. I have never travelled abroad and I'm not planning to. There is war to destruction underway in today's Russia. The regime is wiping out the Russian people. A significant number of people, especially well-educated folk, have already left the country after trying unsuccessfully to succeed here. The life plans of dozens of millions of people who stayed in Russia have failed to materialise. The regime is to blame for this. That's why I can't leave the country. For me, the front line lies here.

Read part two of cafebabel.com's exclusive interview with Voina, 'Voina: ‘As a Russian activist, I’m not sure that I will live long’