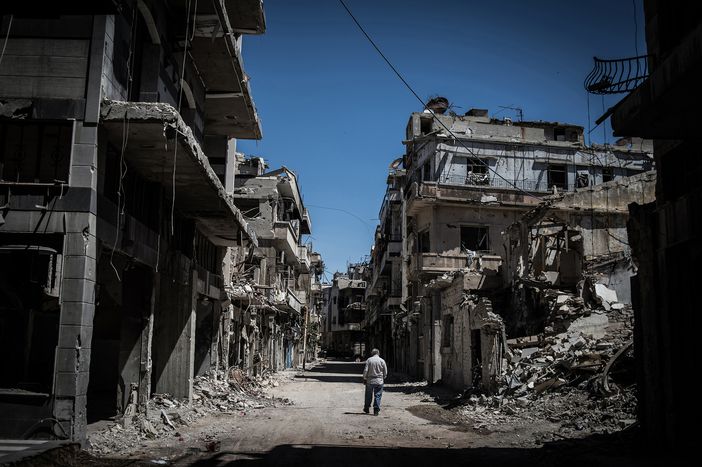 Russia and the West have reached a stalemate over Syria

After the US's withdrawal from the Syria talks and Russia's veto on a UN resolution, relations between the two powers are worse than they have been since the end of the Cold War. Commentators voice concern and wonder how the relations could have deteriorated to such an extent.

The West is not innocent in the Middle East - Handelsblatt, Germany

In Handelsblatt's opinion, the West is now paying the price for not having set up a no-fly zone over Syria:

"Such a step is no longer possible now that Russia has control over Syrian airspace - which it would defend tooth and nail... Putin has fought hard to secure himself an equal place on the world stage. He benefits domestically from his power struggle with the US at others' expense, and Assad remains his guarantee for the only Russian military base in the Mediterranean region and in the Middle East. But the West is also not innocent: the disastrous invasion of Iraq by the US under George W. Bush - which was supported by then opposition leader Angela Merkel even though it contravened international law - ultimately laid the foundations for the rise of the terrorist Islamic State... And finally it was a mistake to negotiate with Russia to find a solution for Syria for so long that Assad became weakened by the rebels and the IS - paving the way for Moscow's current involvement." (11/10/2016)

Obama is at an impasse - Milliyet, Turkey

Milliyet focuses on America's inability to act in the Middle East:

"The situation in Iraq and Syria increasingly resembles an impasse. Especially with operations in Mossul and Aleppo pending... As regards the starting date for the operations, the US leadership is under huge pressure. The prevailing opinion is that they should start even before the presidential elections. Wars are inherently risky and full of uncertainty. The first rule for dealing with uncertainty is good leadership and the ability to take quick decisions. But when elections are taking place, political and military answers to war situations can be delayed. On the other hand, Obama's promise not to send in ground troops limits the options of those planning the operations. With this statement he has blocked any leeway regarding the scale of the war and prevented any new alliances." (11/10/2016)

After the proposal put forward by France and Spain for a resolution to the Syrian crisis failed due to the Russian veto, François Hollande is wondering whether he should even meet with Putin when the Russian president visits Paris next week. Le Figaro would like to see a more pragmatic stance:

"It is flippant, out of place even, for a head of state to voice his doubts and diplomatic moods in public. We are already familiar with Hollande's propensity to comment on current events - far more than we are with him actually taking action as president - and now we see him commenting on his own indecision! ...This situation is an embarrassment for France, and only weakens our voice in an already complex conflict on which we are having a hard time making ourselves heard at all. It's not by treating Russia like an enemy that France will come up with solutions for destroying the IS and ensuring a change of regime in Damascus. France would do well to focus more on pragmatism than on moral deliberations." (11/10/2016)

Russia and the US are poised for open conflict - Novosti, Croatia

Novosti, the paper of the Serbian minority in Croatia, believes that the session of the UN Security Council may well have been the penultimate step towards an open confrontation between the US and Russia:

"Contrary to the claims of Western analysts, the Security Council did not show that Russia has once again prevented an end to the civil war. Rather it became clear that the West's goal is to topple Assad and put 'its' player in power. The whole story about the fight against Islamist terror is no more than that: a story... Washington's strategists want to reduce Russia to the status of a second-rate power once more, - nothing but a regional power, as the American president once quipped... If this hapless session marked the beginning, Russia's shooting down of American jets attacking Aleppo will be the first note of the thundering finale." (09/10/16)