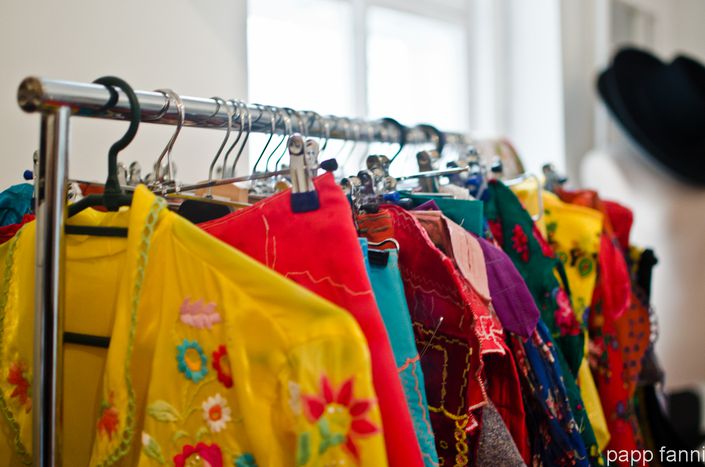 Roma style is in fashion in Hungary, made possible thanks to the Romani Design fashion brand. Countrywide, famous actresses walk out onto the catwalk in flowery gypsy dresses—wearing Romani has become associated with an attitude of open-mindedness and identity. As well as their success in high fashion, the women behind Romani design keep in mind their mission: to empower Roma communities.

The Romani Design brand started out of a small fashion workshop in 2009, climbing up the fashion ladder. Since 2010 their shows have been staples amongst Hungary's high-class events—for 2 years Romani Design has presented its collection during Marie Claire's Fashion Days.

At shows as far afield as Berlin, Brussels, Stuttgart and Paris, Romani is out on the catwalk—often invited by the local Hungarian embassy or cultural institution. Most recently, Romani Design had a fashion show in New Delhi, organized by the Hungarian Embassy of India. Their latest collection is called IKON, rethinking the iconic outfits of iconic women, putting their strong identities in the spotlight.

The Godmother of this sexy, colourful fairy tale is Erika Varga—founder of Romani Design. "My mission is to raise the prestige of Roma communities, thus empowering them," she explains, "I am one of those Roma who assume and are proud of their identity. Others do everything to hide it—unfortunately that is the bigger group. I want to show them that there is a new, free Roma identity."

Erika has been working on constructing this identity ever since she got her diploma in ethnography. She founded the Foundation Amaro Trajo (or "Our Life”) for Roma Culture in 1999. Since 2004 she has held Roma ethnography workshops for children, visiting Roma communities all around the country. Her tailoring activity started in 2009 with the founding of Romani Design, which she considers a powerful means of sharing her message. 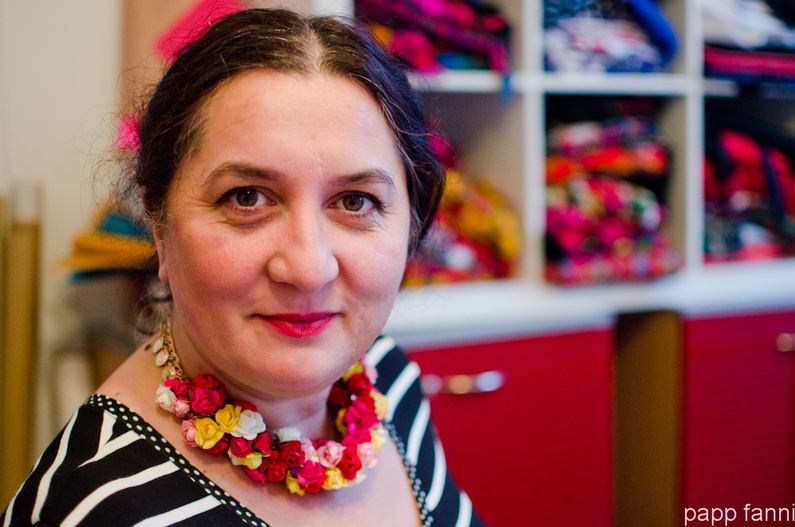 "The brand helps me to spread the word louder and stronger, as the outfits speak for themselves," she explains, "They generate dialogue throughout society about Roma life. Today the US ambassador and famous actresses wear Romani; maybe young Roma watching them on television will start to see the positive side of their own culture."

"...and neither can my colleagues," explains Erika when it comes to tailoring, "Tailoring requires complex knowledge; we are all at different steps in it, all learning."

Romani Design started as a business employing 6 people, today they have between 9 and 12—depending on the current number of interns. Apart from the Varga sisters, Erika and Heléna, there are 5 other Roma and non-Roma women working permanently for the fashion studio. The whole family gets involved; Erika designs clothing, her sister Heléna is responsible for accessories, their mother Margitka creates Romani puppets—everybody finds their role in the Godmother’s fairy tale. 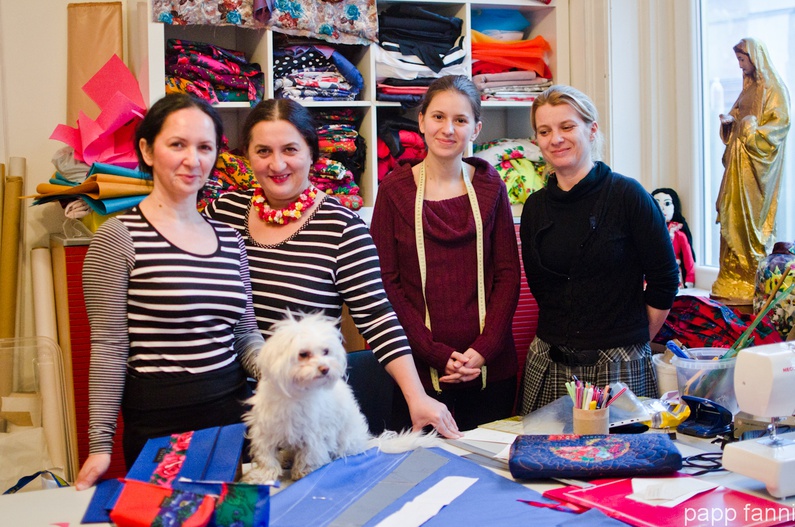 Some of the Romani puppets found owners at a charity auction for UNICEF. However, charity is not the resource that Erika believes in when it comes to social change. She’d rather provide those in need with a profession. The Foundation Amaro Trajo has been involved in educational tailoring programs for as long as Romani Design has existed. In 2013 they took part in a one year Hungarian–Slovakian EU program, making tailors out of 15 trainees, both Roma and non-Roma. They're doing the same thing next year with 4 trainees over a period of 6 months, only this time self-financed.

"2015 was the first year that we really concentrated on business—in the beginning we were more concerned about transmitting our social message—as the message got more strongly connected to the brand, we could afford to care about standing on our own two feet," says Erika, citing the next challenge for Romani Design as becoming financially independent. 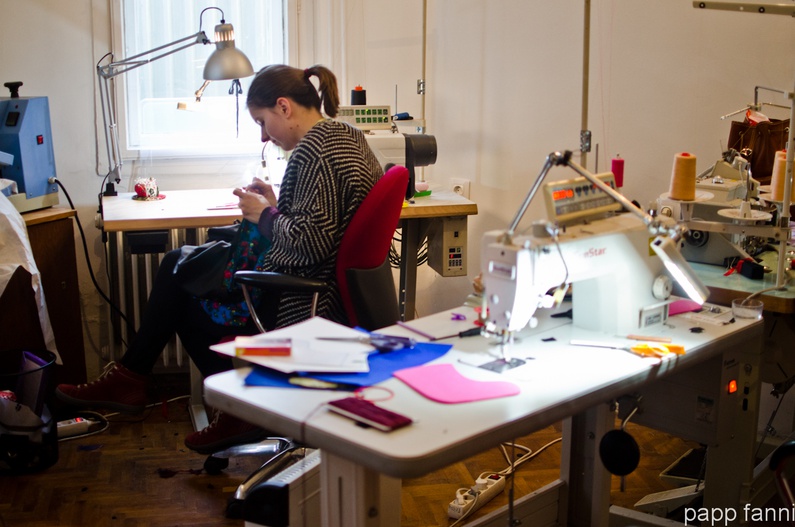 "These last few years we were happy to present our message anywhere people invited us for free—now we always get paid. Still, 50-60% of our expenses are financed by the ERSTE Foundation Roma Partnership, in whose program we take part. Our intent is to make this percentage smaller and smaller by building a sustainable business—the Foundation helps us to learn how to do that."

Romani Design is the only initiative in Europe that uses fashion as a force for community building for the Roma—according to the research of Erika and co. The network is however ready to be built, and they have already inspired Hungarian organisations in Slovakia and Romania to implement the "Romani-method"—using tailoring to discuss Roma culture. 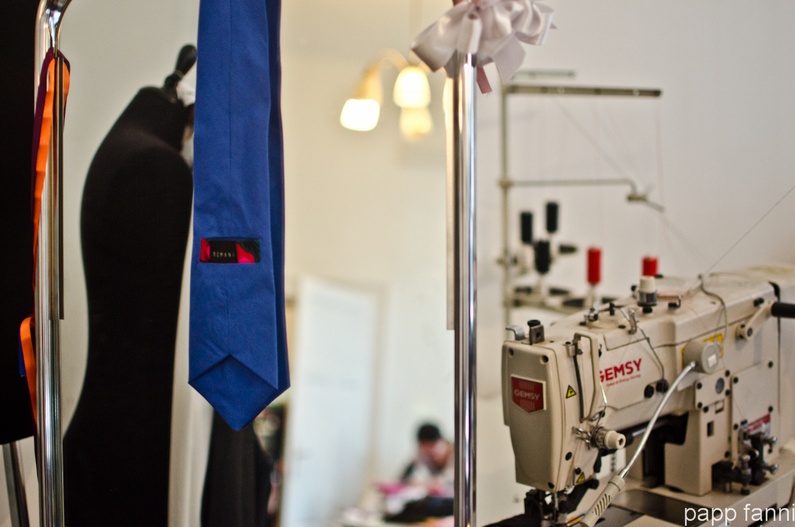 The inland buzz is as strong as it is abroad—more and more organisations are contacting Romani Design, hoping for cooperation. "Requests find their way to us every day," says Erika, "School classes come to visit us. Young Roma and non-Roma alike ask for outfits for public presentations. I am happy to give them clothes—the only condition is that they wear them!"

Erika highlights a young scientist of Roma origin, who chose to wear a Romani vest to hold a conference at the Hungarian Academy about modern Roma identity. Volunteers of Bagázs—the biggest Hungarian association working for the inclusion of Roma living in deep poverty—also got the chance to wear Romani.

The Romani Design fashion studio is located in an old mansion in an outer district of Budapest, where Erika lives with her husband and their dog. “The studio needed a bigger place," she says, "And anyway, we had some trouble with our neighbours in the centre. They liked us a lot, but they got scared when 6 gypsy pupils came up the stairs for a studio visit." 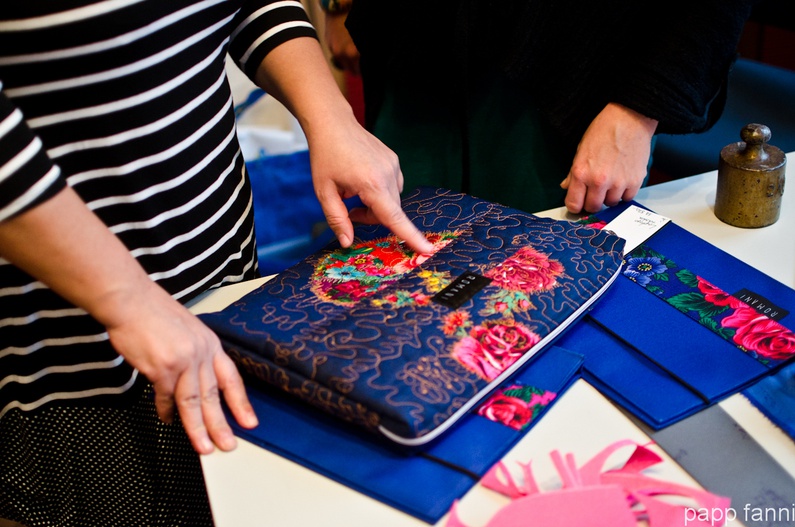 Parallel to the high-class Romani pieces created in this studio, the brand plans to launch a more accessible collection with clothing prices ranging from 70 to 100 euros—making it affordable for the Hungarian middle class. “Money cannot be an obstacle. If somebody wants to wear Romani and has only 50 euros, we will make something for 50 euros," explains Erika.

Meanwhile Erika and Heléna proudly show us their new bag collection, entirely designed by Heléna. Their special design is made with a machine they spotted at a design fair in Berlin. Fabric bought in India is piled up on shelves. In front of the camera stand strong Roma women, proudly smiling—with successes behind them and big plans ahead. 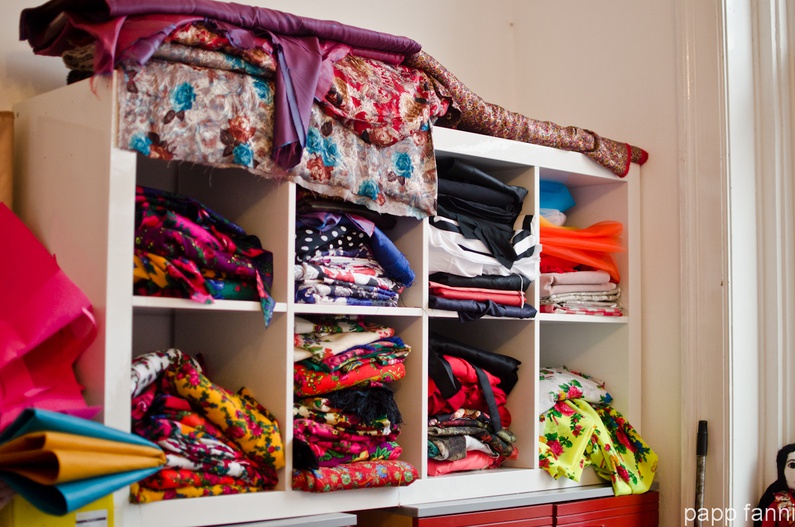 This article was published by our local team at cafébabel Budapest.