Roland Lipp on Moscow, the dirtiest city in Europe

The German engineer from Brandenburg plans roads which run along house roofs. He is trying to save the metropolis from gridlock. The inventor of these ‘street houses’ is holding talks with German firms, who should be joining him on the project 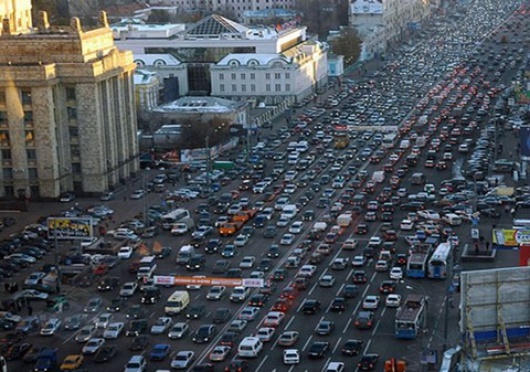 When the after work rush hour starts in Moscow, the city centre transforms itself into a traffic jungle. The evening concert of car horns begins and fumes stain the buildings grey. Anatoly Kossakov needs three hours to travel from his office in the centre to his house on the city’s edge. The lawyer is stuck in a side street in his BMW. ‘Whatever did I buy a fast car for?’ he groans. In the Moscow queues, a wheelchair user would make faster progress.

Kossakov isn’t wrong there. The Russian statistics institute, IRN, has worked it out: the average speed in Moscow is 16km per hour. Every one of the three million drivers in the city spends about eleven hours a month in queues. Car numbers have gone up five times in the past few years, according to Igor Lubashevsky from the Physics Institute of the Academy of Sciences. The city administration fears that the traffic could come to a complete standstill within four years.

There is someone, though, who says he can not only prevent gridlock, but turn the city green. What’s more, three times as many cars would be able to travel as now. Roland Lipp from Brandenburg is sitting calmly in a restaurant from which the car horn concert can be heard clearly. The engineering professor is scribbling lines on a piece of paper, and in doing so is turning Moscow upside down. Below, pedestrians are strolling through parks, while cars are driving on the roofs of the offices and shopping centres. The exhaust fumes are drawn upwards, and the noise is muffled by protective sound barriers. Under the rooftop roads are kilometre-long car parks, from where lifts lead to the offices beneath. According to the Russian department for transport, 450km of new roads should suffice to take control of Moscow’s transport problem.

Roland Lipp calls his blocks ‘street houses’. If the ‘inventor’ as he calls himself is to be believed, the scheme would save fifteen million euros a day: petrol costs would sink by 44%, and engine and road damage would be reduced. Seven tonnes of carbon dioxide less would be emitted each day. Car drivers, like the BMW fan Kossakov, could cruise through the metropolis at speeds of 40-80 km per hour.

New York, Chicago, Tokyo, Shanghai, Hong Kong – Lipp has travelled to all the world’s largest cities. But in the end he chose Moscow as the place to realise his ideas. It was when he he got stuck in traffic in the city centre on the 14-lane Leningrad Chausée in 2005 that the idea came to him: ‘a city like this can’t be single storey.’

When Lipp comes round to talking about the city administration’s plans, he claps his hands above his head. He shows on the construction plan how 87 new multi-storey car parks would quickly be commissioned. In the city with the highest property prices in Europe, that’s an expensive undertaking. His idea will also clean up the property market, Lipp boasts. His street houses could run like a ribbon through the city, where the Leningrad Chausée now lies. ‘If the city government allows this project, the queue of investors will stretch to Vladivostok,’ he winks.

German firms on side

This argument has made Moscow mayor Yuri Luzhkov sit up and take notice. In 2007 he convened a working group, which Lipp regularly attends. He presented his concept to the city assembly together with German companies Siemens and Knauf. The next day assembly member Ivan Novitski wrote a letter to Luzhkov requesting that a test section be built. Lipp is waiting for the decision with anticipation. 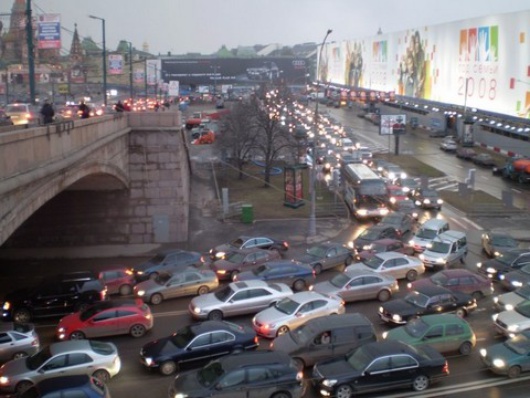 The engineer already has the plans for the 1.6km pilot section in his briefcase. He is calling the stretch of road, with business space beneath, the ‘Bavarian mile’. Two access and exit roads spiral up the end of the five-storey building. The roads curve upwards from the Kavkazky Boulevard like those in a multi-storey car park.

Siemens and Knauf have expressed their interest in joining forces on the project. ‘We are observing further developments with great interest,’ explains Knauf spokesman Jörg Lange. The Siemens Russia representative, Nikita Kushkin, still doubts whether such buildings are really habitable, if cars are driving on the roofs. But if the city should give the project the go-ahead, it would be a very interesting project, he says.

The engineer from Brandenburg is sure he can transform the dirtiest city in Europe into a liveable mega-city within eight years. ‘I’ve already got the most important people on my side,’ he smiles, ‘and that’s the Muscovites themselves.’ Lipp glances through the sooty window panes out to the eight-lane road. The traffic is at a standstill, for the moment.