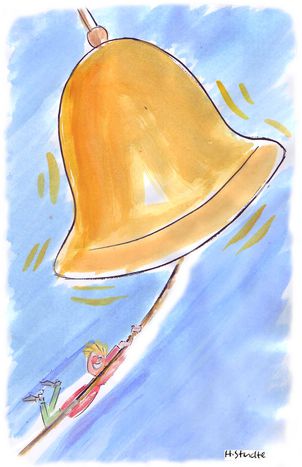 The French will call you a poor bell, the Italians will warn you to stay in earshot of a bell and the Spanish will advise you not to swing it too high. Idiom of the week

Twitter is to the digitalised person what bells often are in rural places: a time keeper and a source of information. And so in european languages bells are often a metaphor for communication. As they say in Italy, where people live ring the bells (Come la gente vive, così suonano le campane). Friedrich Schiller wrote a long ballad about the theme, The Song of the Bell ('Das Lied von der Glocke', 1978), almost all of which entered into the German canon of famous quotations - an unavoidable horror for legions of school children. If Anna, who as is well known comes from Venus, can talk the hind legs off a donkey while chatting to poor Gianni, in Italy this is making the head like a bell (fare a qualcuno la testa come una campana). John can wearily agree with this for the feeling is familiar: it rings a bell for him.

If you want to announce something special in Poland then it is usually when the big bell rings (od wielkiego dzwonu) - thus, an event happening on a truly big occasion. In Spain though, celebrating a premature victory is often described as swinging the bell high (echar las campanas al vuelo), whereas in France they would just shrug their shoulders, Pauvre cloche! (poor bell). Although early seventeenth century English poet John Donne warned against infotainment as early as the Elizabethan age, in Italy they tell you to watch your back by staying within earshot of the bells (stare in campana!).

Bells are also sung about in many Christmas songs. If, as in Germany, the bells never sounded sweeter (Süßer die Glocken nie klingen), then alarm bells sound for young people in English and in Polish (zapalił mi się dzwonek alarmowy). So maybe it's better to stick to the sugarfree version of the evergreen bells which ring when you're sledging. Jingle Bells...