Repeating shapes and patterns in Paris

I know that Paris is the city that so many people have either visited or seen in films, so if I simply describe what I saw there, I doubt if those of you who read this blog on Google Reader or similar will click on the link. However, there are many angles to look at Paris, and, interestingly enough, its not-so-touristic objects are much prettier and more interesting than those we know of.

One interesting thing I noticed was that Paris gives you an impression of being eclectic and artsy, while in fact it is built and kept up in precise order and follows a set of rules. We have already talked about overplanned urban spaces, remember? I guess the key to the success that Paris demonstrates in avoiding something like this is the fact that it is so old, and its shapes have developed and been tested over time.

I found Paris more international than I would have expected, having in mind the stereotype of just how proud the French are of their culture. There are many English words out there, and the city is densely populated with the most famous global catering chains, some of which have become metaphors for globalisation itself. Not everyone would expect that one of the most interesting and bustling spots in the city is an English bookstore called 'Shakespeare and company'. It attracts locals, expats and tourists to dig into the huge piles of books or squeeze past each other in narrow corridors to get a glimpse at this Adorno volume or that new poetry in the upper shelves. No quick way out of this kingdom of books. 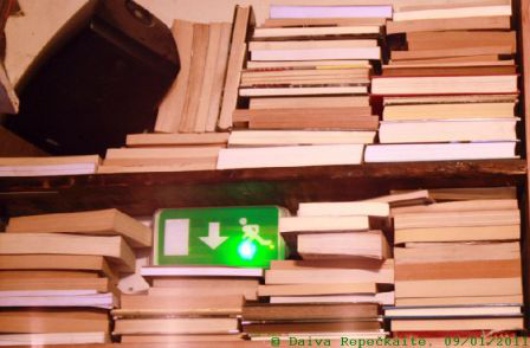 There are some smaller bookstores where you have to literally dig into boxes in the hope to find some treasures. And people do.

I think it's a great idea to visit Paris on a sunny weekend in January, when tourists are few and locals are more relaxed, although tourist flows to Paris are a permanent condition. Here (picture below) tourists flock to take a picture of the Mona Lisa. I witness two Spanish youngsters stealing a moment to capture on camera the twirling blue self-portrait of Van Gogh at d'Orsay museum, where taking photos of artworks is illegal. Every day tons of bad quality images from Parisian museums neatly fill albums that will be worthless once the trip is over. 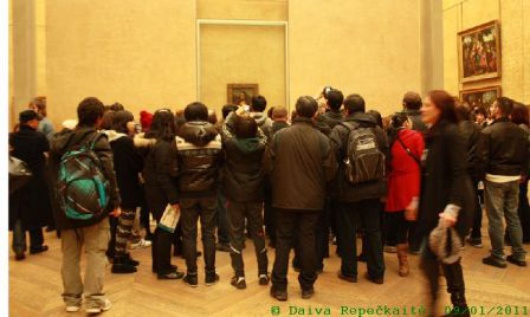 Even in winter you can feel that tourism is not only a huge opportunity for the city, but also a burden. On the other hand, travelling off-season, you may see tourists and locals disperse in the city space so as not to bother each other. 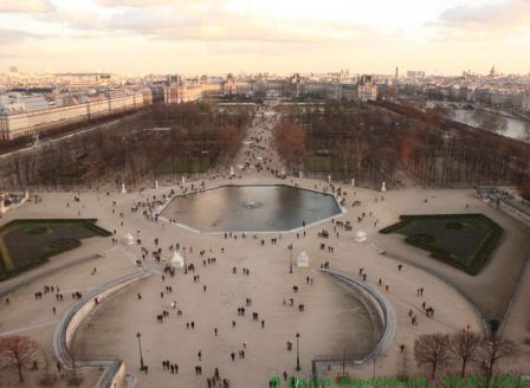 It's not only from above that Paris looks so well-ordered. My photography teacher used to say that repetition is pleasant for the eye. Paris knows how to mix repetition with irregularities. That is why it is often considered one of the capitals of urban design. 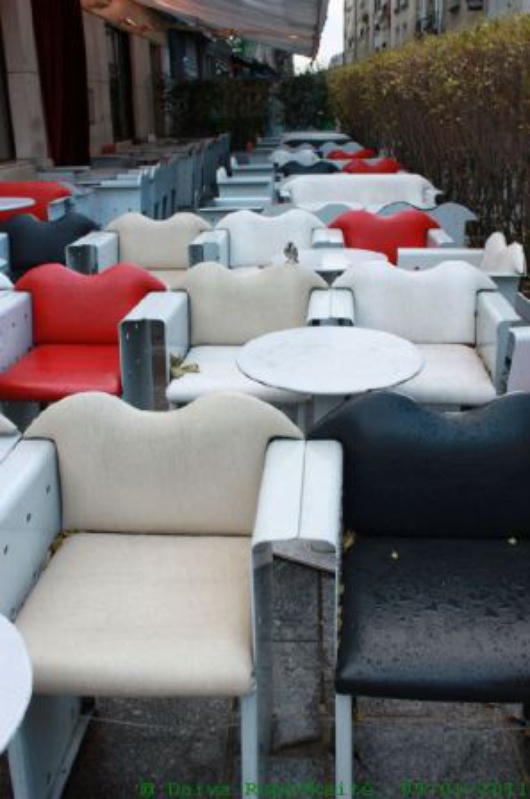 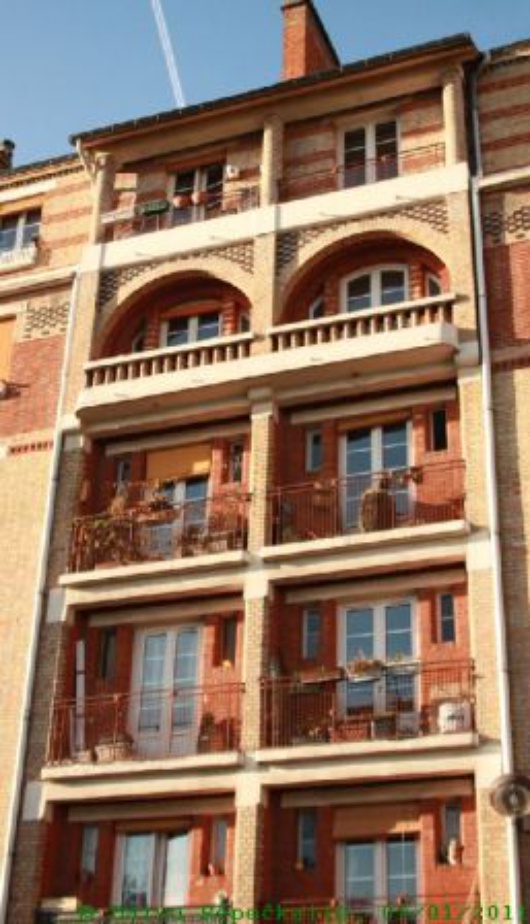 Bellow you see a path leading to a museum across a botanic garden. The obsession with perfect shapes of plants looks rather creepy in winter. 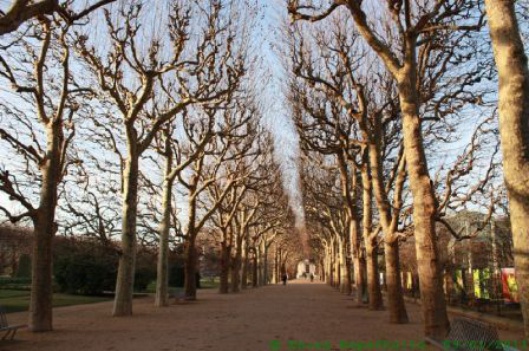 The main mosque is a pretty and welcoming space. Note the eight-pointed star that the Baha'is consider the symbol of their religion. It is not surprising having in mind the Muslim roots of the Baha'i religion. The mosque seems to be mostly frequented by believers of African origin. 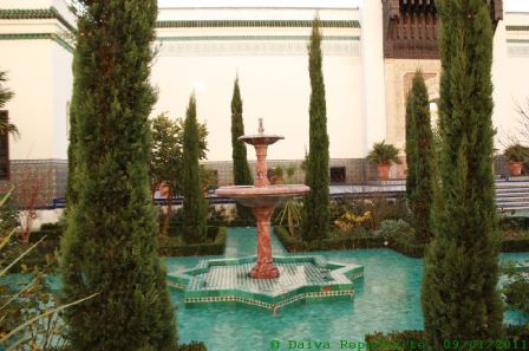 This is the Centre for Arab Culture (not sure if this is the exact name). Its windows are famous for automatically adapting to the flow of light so that the light balance inside is kept as constant as possible. 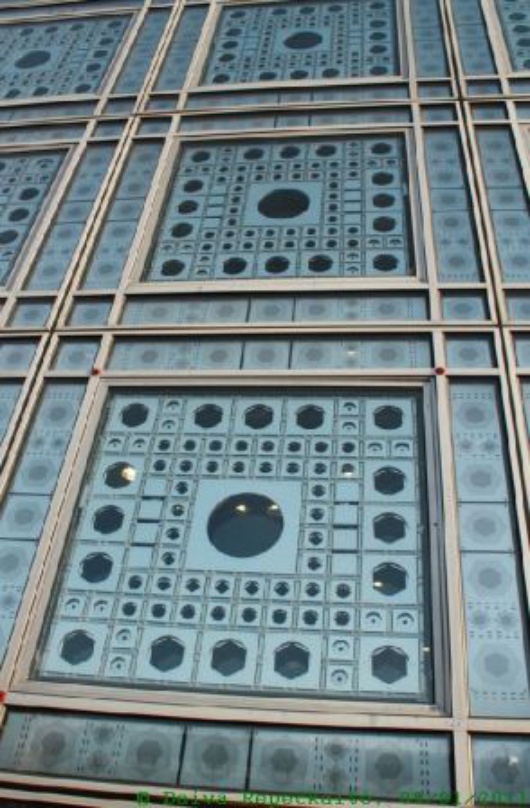 Paris is also full of various unexpected objects, shapes and images. Wedding locks, which, to my knowledge, originated in Italy, seem to have spread in Europe, making tourists marvel and causing a headache to authorities responsible for the upkeep of bridges (bridges corrode faster). "This idea is so Catholic!" joked I. when seeing some of these locks in Vilnius, pointing at the expected unbreakability of marriage, which is not so strict in some other cultures. 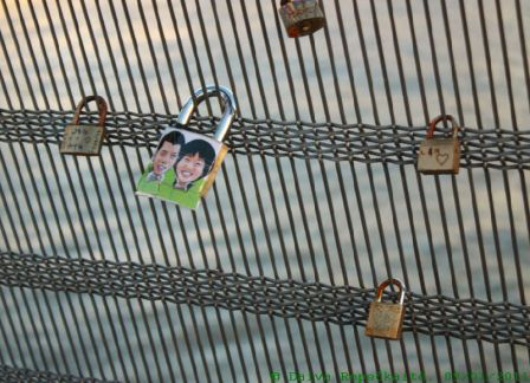 The highlight of my trip - AvatAdam and NeytEve in one of the many medieval churches of Paris. 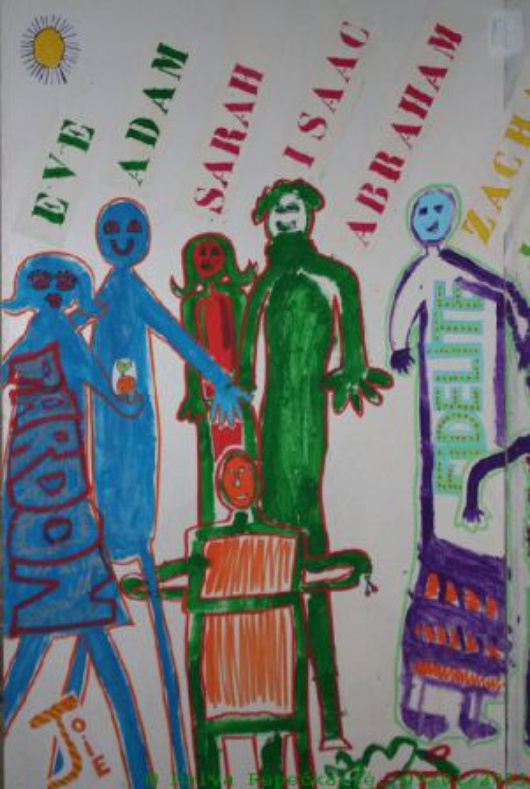 Hm hm, I don't know how to comment this one. It is a restaurant on a fashionable Jewish street. 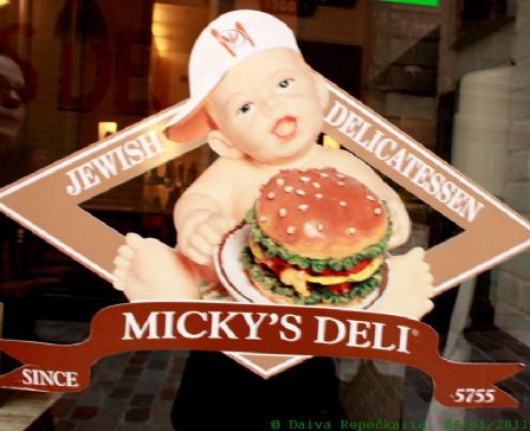 Art museums in Paris are not to be missed. A special collection of African, Oceanian, Asian and native American art in the Louvre was under patronage of the former president, Jacques Chirac. Critics said that it's not the mission of the Louvre to represent all cultures. Enthusiasts maintained that it was about the time the famous museum opens up to artistic treasures created beyond Europe. 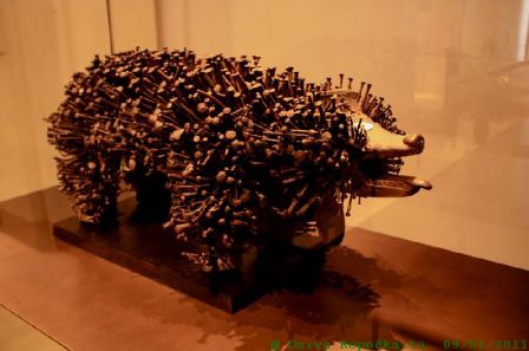 The setup is still very colonial. You walk a long way to get to this exhibition, passing flamboyant Italian and Spanish art of the Renaissance and later periods. Art from cultures covering most of the world is lumped together in one hall, vaguely divided by continent/ region, anonymous, with descriptions of each work placed on the walls rather than next to the works. Still, it signifies an attempt to map creative processes of comparable periods to those which are presented in the elaborate European art halls.

True, museums can confirm or confront your stereotypes. In the picture below you see a big fat ass in a crucifixion scene (the painting is also located in the Louvre). Clearly, the painter did not face Inquisition for disrespect of religion. The Louvre is full of deliberately ugly-looking saints and obese infants. The audio guide at the d'Orsay museum explains that many artists used Antique myths as excuses to paint nudes. All these historical paintings educate us about the search of basic humanity, both in subjects and artists themselves. While it took a while for commoners to appear in artworks on the same grounds as saints and mythical figures, human imperfection was sought in saints, gods and demigods, and perhaps offered a soothing comfort to those who learned history and religion from the paintings. It was much later that obsession with perfect beauty started. 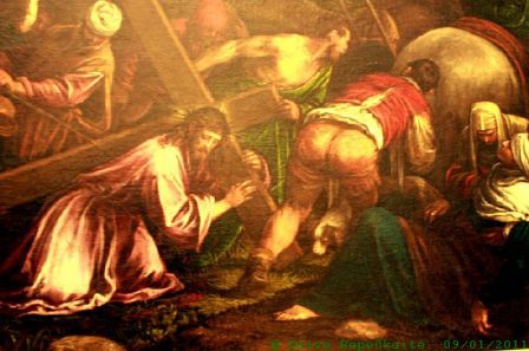 The picture below is a feminist provocation at the Pompidou Centre. 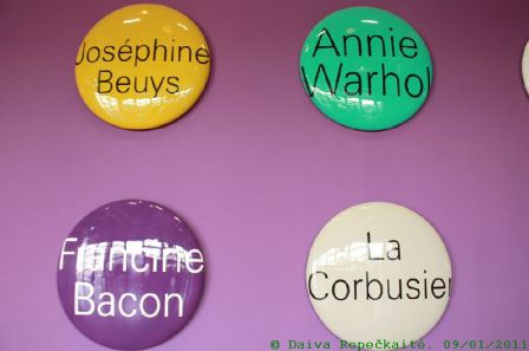 It is a part of the very interesting exhibition of provocative pop art of individual artists and groups like Guerrilla Girls.

As good as it is to see the landmarks of Paris, true inspiration can wait for you elsewhere. In order to feel the spirit of Paris, I would definitely trade a cliche bagette or croisant for an inexpensive meal at a Cambodian restaurant on Rue de Crussol. It was recommended to me by my host and guide in Paris, Akvile. A friendly family runs the place, full of colourful images and offerings to gods and structured in a usual canteen style. But you will soon see that there is more than enough room for all kinds of people. Also, it was quite an interesting experience to see what locals would probably call the flip-side of Paris - the metro stop of Chateau Rouge, just a few minutes from the fancy, but, honestly, rather boring Monmartre. It is an immigrant neighbourhood where different rules apply, and one can hardly feel safe there at night. People feel free to shout at each other, trot about in the station and litter everywhere. As we walk to our train, we witness someone stealing a pair of socks from a counter. I was told that the next stop on Line 4 stands out as a spot for obscure tobacco trade. While initially habits of some people created the space as it is, nowadays the space seems to set the rules for behaviour. There is a good chance that people do not behave in the same way as go to the neat and clean Paris of others. Yet this is Paris too, and it's not in the infamous suburbs that foreigners have heard of. It's right next to the Monmartre.