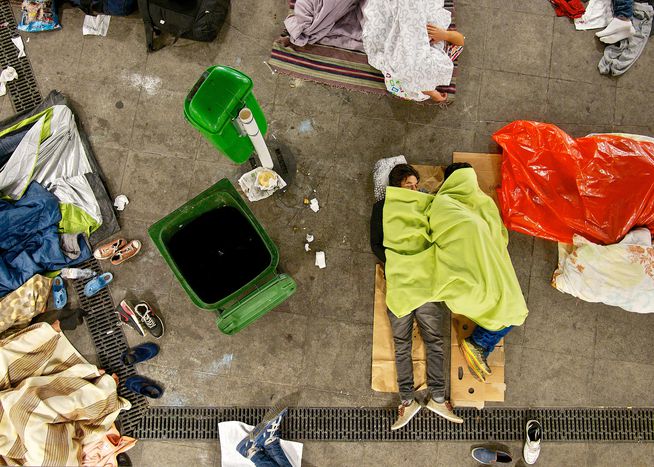 Refugees and the homeless: in the same boat in Budapest

To date, more than 306,000 refugees have reached Hungary, with the majority seeing the capital city Budapest as a gateway to the rest of Europe. Here, many people are willing to help, but there is also political resistance. The argument is often heard that refugees would take advantage of the social benefits of Hungary and clash with homeless people. Is this the case?

Keleti railway station in Budapest is now devoid of refugees, those who came to the Hungarian capital through Serbia and Croatia to wait for the journey onwards to Western Europe. The office of the non-governmental organisation Migration Aid looks deserted. Only the cleaning staff can be seen behind the glass.

The makeshift camp at the station, which provided temporary accommodation for tens of thousands of refugees during the busy summer months, was abandoned after Prime Minister Orbán tightened immigration laws at the start of September. “Illegal crossing of borders” now carries a sentence of up to three years’ imprisonment, and the new fence on the Croatian border stops most people who still try to make attempts to cross. Shortly after the refugee crisis, however, there were still another group taking shelter at Keleti: some of the city’s homeless population, of which FEANTSA estimates there to be around 9000.

In some ways, the two groups are both in the same boat, since Orbán’s actions against them are becoming increasingly strict. For example, on 11th March 2013, the government passed the fourth amendment to the Hungarian Constitution, which made homelessness illegal and meant that being “resident” in certain public places would lead to prosecution. 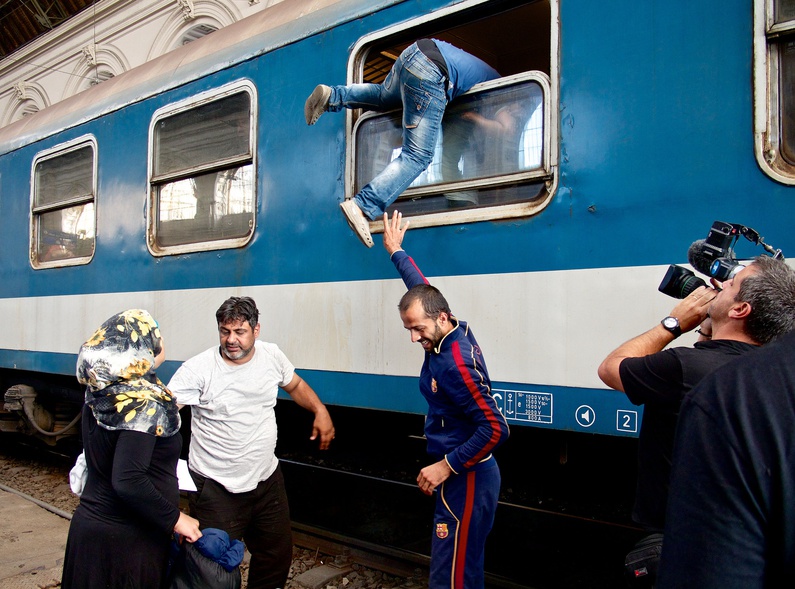 The Budapest Methodological Centre of Social Policy and Its Institutions (BMSZKI) is just a ten minute walk from the station. In spite of the building’s old facade, it feels more like a hospital – sterile, its high walls remaining largely undecorated. You could hardly say that the building seems welcoming. On top of this, few people show any willingness to talk to strangers. Yet the city’s homeless shelter does offer a little glimmer of hope for those in need. As well as shared rooms for low earners, there is a wing for disabled people and a special room for deaf people. There is only one person there, who appears to have just arrived and is acting like they are visiting.

Bernadett rushes to her office, covered from floor to ceiling with papers and documents. She quickly clears the visitor’s couch, while her assistant, Dalma, politely offers coffee. When the social worker finally takes the seat opposite me, she becomes noticeably more relaxed and quietly begins to explain the situation regarding homeless people in the city. She speaks from thirteen years of experience at BMSZKI. 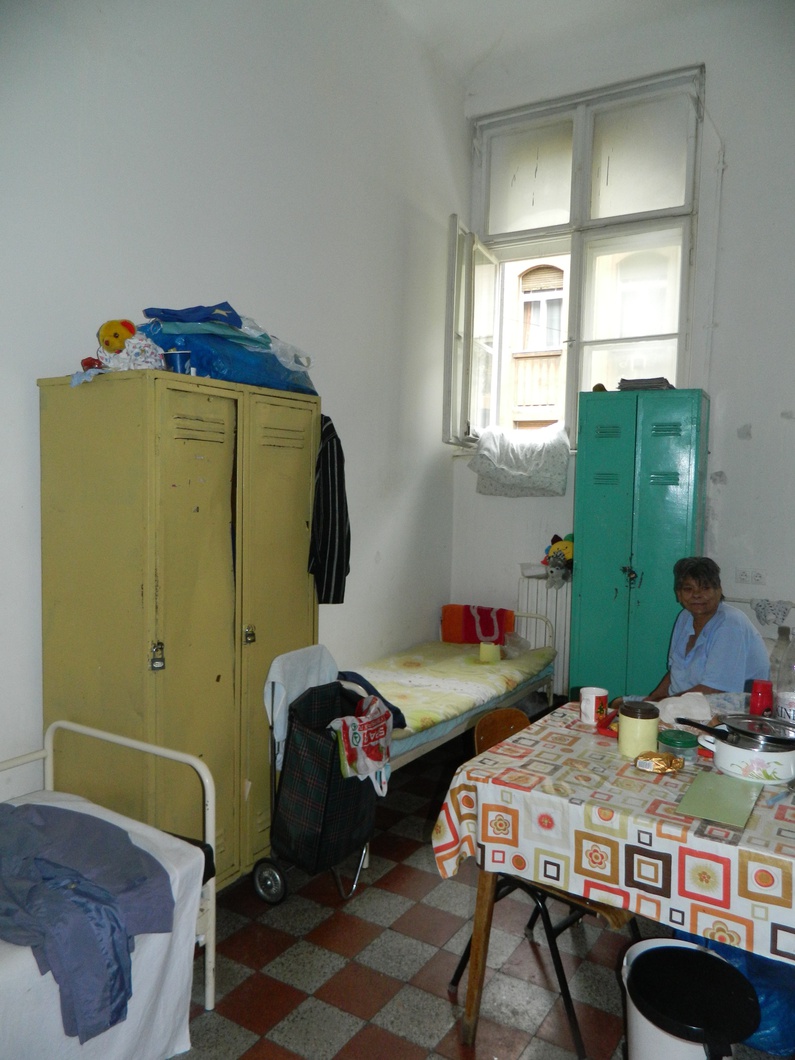 “When homelessness became illegal, our neighbourhood was the first where police actually punished people on the street. It wasn’t just people who slept rough, but also those who simply stopped out on the street for a period of time. So our centre has opened up its backyard to give homeless people the opportunity to set up camp in a non-public place.”

When we come to the topic of the refugee crisis this summer, Dalma smiles significantly. “That was really exceptional.” As refugees no longer came to Budapest just on foot, but in large convoys by train, the organisation Migration Aid asked if the centre could open its doors to refugees as a day-care centre, where they would be able to rest, shower and charge their phones. Bernadett explains: “Migration Aid volunteers brought the refugees here from the station. The idea was that around 50 people could use our services each day. At its peak though, there were 350. During the huge influx of refugees in the summer, we provided for 8300 people.”

However, the warm welcome given to refugees in homeless shelters is not always replicated elsewhere. In the office of the pro-homeless people organisation A Varos Mindenkie (roughly: “the city belongs to everyone”), I meet several activists willing to talk, including Tompa, who has been homeless at several points in his life and is fluent in German. His expression turns serious when he talks of his scepticism regarding the flux of migration from the south: “Unemployment in Hungary is very high – close to 100% in some villages in the east. How are they going to manage if they get allocated a group of refugees? The biggest problem for me is that I don’t know who these people are. Many of them have no identification papers. I can just say that I’m from Syria too – who’s going to know the truth?” 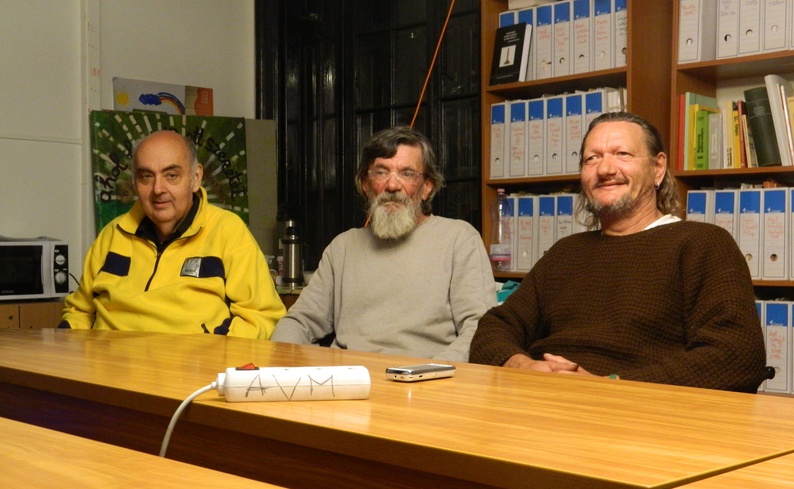 Yet  nobody wants to (officially) acknowledge any kind of rivalry between these two disadvantaged groups. Gabor, who is homeless and also an activist for A Varos Mindenkie, denies any such thing: “It was no better or worse with migrants. Any rivalry was more between non-governmental organisations, who couldn’t work together.” He admits, however, that there was grumbling amongst the homeless people when they did not receive any free food like the refugees. Also, some houses, which had previously been made available to homeless people and were then used as accommodation for migrants, are now no longer available.

Yet perhaps if there is hope for tackling the social problems within Hungary, it lies with the couple who I notice holding hands in the homeless shelter on Alföldi Street. Dalma reveals that he, who I had already picked out as a refugee at the start of my visit to BMSZKI, visits his girlfriend – who lives in the shelter – as often as he can. Hungary can learn to draw from its social and ethnic diversity, rather than suppress it. But for the moment, this couple’s story remains the exception, not the rule.