A refugee camp right in the middle of Brussels – until recently, it would have been unthinkable. As a result, the authorities have been caught off-guard. Faced with the inertia of politicians, volunteers do their best to manage the situation.

On average, 900 migrants live in the Parc Maximilien, near Brussels-North station. This is not including the volunteers. It is a logistical and organisational challenge that must be managed with the means at hand. Food, distribution of clothes and tents, healthcare, medical aid, cleaning…there are numerous tasks to complete and resources are limited. Or rather, they depend on the generosity of citizens and the dedication of volunteers. So they improvise and cope as best they can.

Manu is one of the people in charge of the camp. He is pleased with the progress that has been made in such a short space of time: “Very few of us have worked in a refugee camp before. At the coordination level, there are maybe three people who have done it before. This doesn’t happen every day in Belgium. So at first it was a bit chaotic, we had to do everything, put everything together everywhere. Today it’s a bit better, the camp is more structured and everyone has a clear role.”

The core leaders and coordinators continue to look for solutions to improve the organisation. And set alarm bells ringing. “We have established a sort of land register of the camp”, Manu explains. “A list with the locations of tents, which ones are occupied and which ones are free. This has become really important, especially as we start to reach saturation point. We’ve almost reached full capacity in the park. If more people arrive in the next few days, we won’t know where to put them. They risk ending up at Brussels-North…” 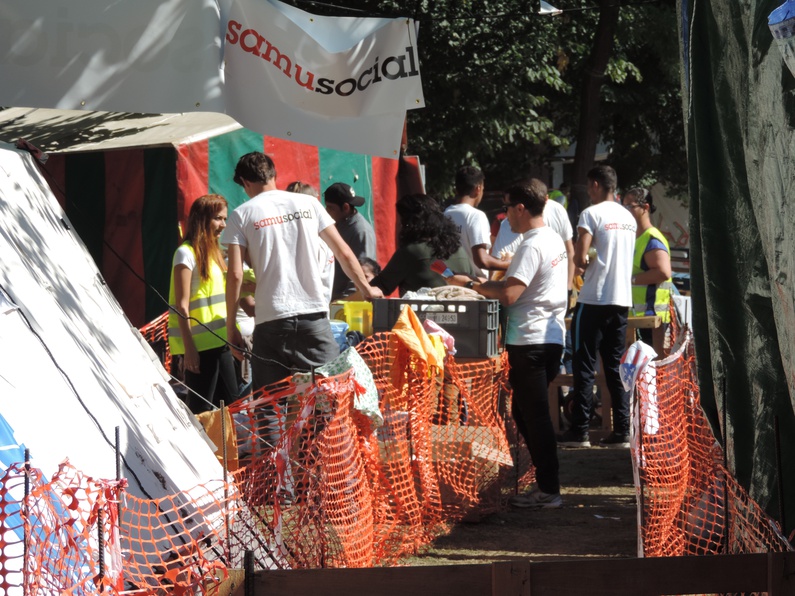 Until recently, the team could count on the support of numerous volunteers. In front of the “Volunteers welcome” stand, there was a virtually uninterrupted flow of new helpers. In less than ten minutes, ten people would appear, in small groups of three or four. There seemed to be several “types” of volunteer: those with specific skills (medical, DIY, etc.) who came to help with specific tasks, and those who arrived saying “I want to help, what can I do?”, whom the team distributed as required. And then there are those who came just to talk to the refugees, to listen to them, to show them some sympathy or to tell them about life in Belgium. Even if they don’t participate in an “active” way, these volunteers should not be underestimated. Sometimes a sympathetic ear is just as important as a bowl of rice.

Sadly, the situation has changed. A lot of the volunteers were students. University courses started again, and apparently this had an impact on the number of helpers. At first, Manu was not too worried: “The first big weekend, it is estimated that there were around 400 volunteers each day. And we said that during the week we would be in trouble because nobody would be here. But in the end there were around 150 volunteers. If students stop coming, there will just be different people – pensioners, the unemployed, part-time workers… that should work.”

Unfortunately, the events that followed seem to have proved him wrong. After several days, the Brussels citizens’ centre for refugee support - which coordinates the actions of citizens in support of the refugees - increased its appeals. There are hardly any volunteers left in the camp. This is a very difficult situation, because new refugees keep on arriving. 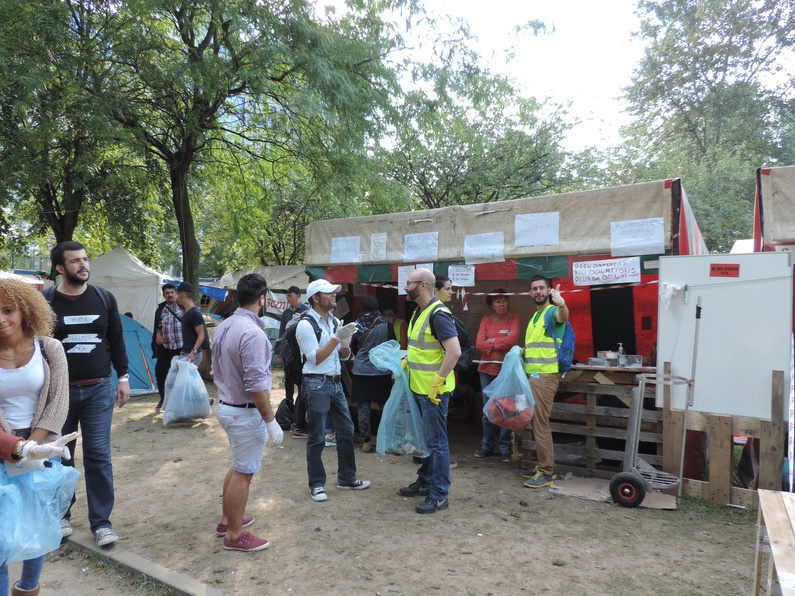 That said, having an organisation that is too well-developed can also cause problems. It makes the camp durable, and that is not the idea. It must not become a (semi-)permanent structure, on which politicians can rely.

The question of the camp’s shelf-life is key. Certainly, there have been additional places created in welcome centres. But that doesn’t solve the whole problem. Here, there are people who are waiting for their first contact at the Foreign Office to submit their request for asylum. And while this is not done, they cannot go to a welcome centre. Therefore, the camp’s shelf-life does not only depend on free places, but also on the Foreign Office’s ability to manage the paperwork (they currently manage 250 applications a day). It's not the same thing.

“For us, it’s what happens before the welcome centres that counts here,” explains Manu. “Because it’s fine to talk about the afterwards, but nobody talks about the meanwhile! Last week, there was a waiting time of six days to open a file at the Foreign Office. There is a risk of this going up to two weeks very quickly. What are they (policymakers – author’s note) going to do with these people in the meantime? We are only citizens, it’s not our job to deal with this long-term.”

By the time all the different levels of government reach an agreement, the matter will not be settled straight away. One building was eventually made available to migrants around the clock, but it can only accommodate 500 people. The others will be spending a few more nights outside…

Our local Brussels team is currently working on a dossier devoted to refugee camps in Belgium. Solidarity, resourcefulness and a large dose of humanity… find all the articles on the front page of the magazine soon.