Rebuilding urbanised Lyon ‘onto itself’

Since the 1990s, after a few dark decades, the city began to reassess itself. With a structure from another time and overflowing tumultuous inner cities, action needed to be taken to bring Lyon into the 21st century with confidence. 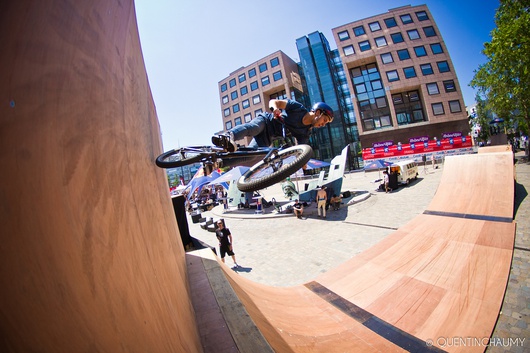 Image: BMX in Part-Dieu, by the train station

According to wikipedia, the city of Lyon is now ‘on a French and European scale, one of the fastest-growing cities’. One thing is certain: between 1999 and 2009, the metropolitan area gained 100, 000 new residents, 35, 000 alone in Lyon itself. This growth drove the creation of different projects to prepare for the future. In the early 2000s, it became clear that the greater city was too spread out, cars took up too much space, and the gap between the chic west and working-class east was widening.

In order to transform the city and overcome these difficulties, many strategies have been developed. Among them, redesigning the urban centre without continued expansion, developing alternative means of transportation (vélov', tram, bus), creating denser housing along major transportation routes, and preventing Lyon from being divided in two by balancing social housing on both sides.  In order to structure this undertaking, different ‘poles’ were created or strengthened.

Beneath the edge of rough Lyon Perrache train station, the district of Confluence is being reborn. Until the 2000s, it was home mainly to declining industrial activities. Recently, Raymond Barre and Gérard Collomb initiated a modern project to transform the entire southern tip of the Presqu'Île, surrounded by the Saône and Rhône rivers, an exceptional yet oft-forgotten area in the heart of Lyon. Designed in phases, the project is already at a significant stage of development. Many apartment buildings have been completed and new residents, both owners and tenants with government assistance, have begun to move in. 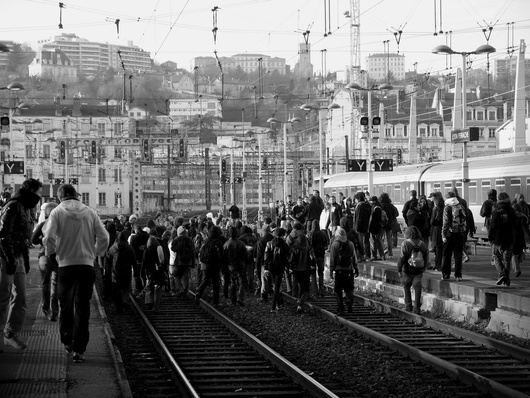 Determined to be modern, the neighbourhood is far from a standard housing block. Between glass, wood, stone and metal, the buildings are virtually all shapes and sizes with unique structures. Alas, there is a risk of lacking cohesion. However, nature and space stay omnipresent, whether through carefully designed public parks or the famous nautical square, an artificial canal that cuts the southern tip of the Presqu'Île.

Image: Scenes of the Occupation at Lyon Perrache

On one side lie blocks of residences, whilst on the other there is a brand new supermarket which is connected to the rest of the city by tramway and a ferry that goes all the way to the large square that is the Place Bellecour. ‘I am very happy. At first it was a bit deserted but it becomes increasingly lively and businesses continue to open here,’ raves Evelyne, 50. In 2007, she decided to buy a ground floor apartment with her husband. After moving in in 2010, she has been awestruck with the development of the area and quite proud of her status as a pioneer. ‘The neighborhood is very mixed. There are many social housing projects, even more than we expected, but it's still very nice to live here. The transportation is also great, with the tram and ferry along the Saône to the top of the city. They are even going to build a bridge across both the Rhône and the Saône. It will be very easy to leave the city, which is important to me because I like to do things on the weekend.’

Ultimately, Confluence also aims to be an ecological role model. It will be the first sustainable neighbourhood in France to be endorsed by the worldwide fund for nature (WWF). Some of their high goals include ambitious zero-carbon buildings and sustainable materials, waste management, water management, social diversity, shared gardens and biodiversity amongst others.

Faced with the encroaching Lyonnais suburbs - urban responsibilities were multiplied by ten in the 1990s - the government has decided to take control of rampant urbanisation. ‘Our target is to restrict urbanisation to 50% of [Lyon's] surface area, meaning that we need to rebuild the city onto itself,’ says Gilles Buna, the deputy mayor who is responsible for city planning and ensuring the city's quality. ‘The other major change is to halt population growth near major transportation routes, and to focus it around train stations and public transit lines. Finally, we chose to build a multi-polar city connected by public transport, either by reinforcing existing central zones such as Part-Dieu (home to the main railway station in Lyon - ed), or by creating new centres like Carré de Soie in Vaulx-en-Velin, the fifth largest suburb of the city, which is today served by both metro and tram.’

In the district of Part-Dieu, Lyon's second largest train station is a visible symbol of aging urbanisation as it undergoes a profound transformation. Just walking around, it is clear that the city's work is cut out for them. Originally designed as a regional business centre, Part-Dieu has everything of the seventies that has very, very badly aged: sad council housing blocks overlook walkways and concrete patios crush a few squares of yellowed grass. In the centre a shopping arcarde with faded signs is not really the ideal place for a Sunday stroll.

The AUC, an urban planning firm in Paris, was commissioned by the committee behind Grand Lyon to envision a revitalization plan for the neighborhood to turn it into a contemporary metropolitan hub. Clearly, Part Dieu has untapped potential. At least, this is what François Decoster, urban architect for AUC and designer of the Part Dieu project believes. ‘The idea is to transform the neighbourhood, while recognising its distinct character: an auditorium that looks like a shell, a train station growing in importance due to the Lyon-Turin line, the second largest library in France and an urban mall. This is a business district that is becoming more competitive at the European level but still has objects that remain from another era.’ 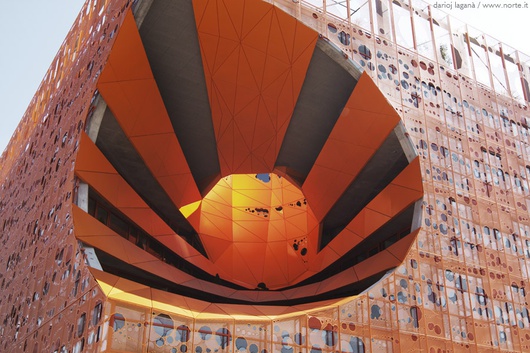 Image: An example of urbanisation in the district of Confluence

An ambitious project has been born, aiming to reconfigure transportation, diversify housing resources, strengthen cultural offerings and create new public spaces. The idea is to build more offices and homes while transforming the area to make it more attractive for companies and its population. Launched in 2011, the redevelopment of the space around the station is already moving forward. Following the demolition and reconstruction of several sites, the city has created a hanging garden, developed new public spaces and created different sports and cultural facilities. Thanks to its position and dynamism, Lyon is looking more to Europe than any other metropolis in France. In order to consciously address its urban and social issues, Lyon tries to fix itself in a dynamic, unwaveringly modern way. Perhaps it is our turn to adjust our gaze.