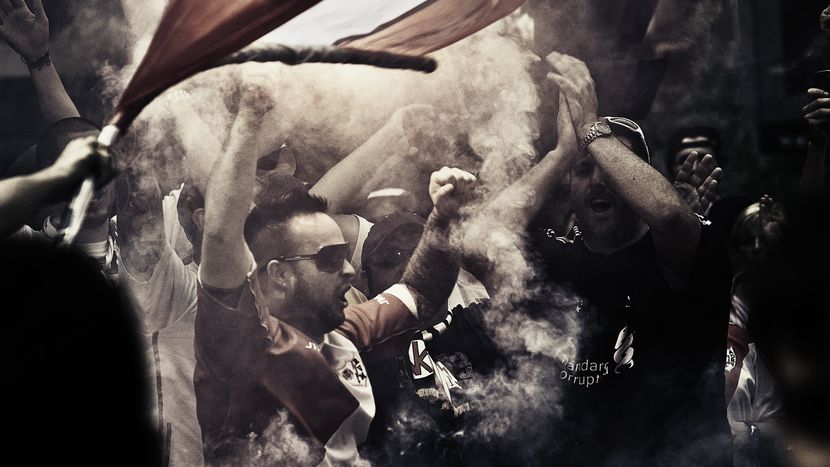 Rayo Vallecano de Madrid: the club of the people

In the popular Vallecas neighbourhood of Madrid, the true people's representative is not a politician but a football club. For nearly a century – using fundraising events and Christmas presents – the Rayo Vallecano has developed the reputation of helping people. “El Rayo” would seem to be the last European sports institution to still have values. But everything is far from rosy...

It is almost midday in Vallecas. At the Disan bar, people fight to get through the day the same way they always do. Young people, always in a hurry, grab a coffee on the go. Older folks sit reading the paper, nursing a half of beer. Today however, something disrupts their usual calm routine.

I'm picking Gabriel's brains, asking about football. I turn to the rest of the room to do the same. The owner leaves in a fit of laughter, a customer shakes the head while drinking his beer.

The 29-year-old is not used to answering questions about the Spanish national sport. He admits he doesn't even like football that much. But as we chat over two panes con tomate, he admits that things are different when you talk about Rayo Vallecano. "The Rayo... it's not just about sport," he says, taking off his cap, "It's a feeling." Oddly, everyone at Disan seems to agree.

Juntos Podemos: "Together we can"

Gabriel is not the only one who lets his feelings do the talking in Vallecas. Here, Rayo Vallecano acts as the highest authority. Considered to be the last local club in Europe able to play with the elite, the institution has a reputation for consolidating all of the passion that this popular neighbourhood of Madrid has to offer.

At Vallecas, the Rayo has become a vital element of daily life. You speak Rayo. You eat Rayo. You drink Rayo. You fuck Rayo. You sleep Rayo. The bonds that tie the club to residents are inextricable. The club is one of a kind – even for a team currently playing its 5th consecutive season in the Liga, one of the world's toughest championships.

Like a symbol, the Estadio de Vallecas stadium stands at the centre of the old city, recently swallowed up by the capital's urban development. When leaving the metro that bears its name, just a stone's throw from downtown Madrid, the stage doesn't quite have the allure of other great European arenas. We enter a back door, nearly hidden, on the corner of a quiet street. Inside, a receptionist disturbs the quiet of the room by tapping at her keyboard. It's a calm that will soon be obliterated by the arrival of Luis Yanez-Rodriguez.

The general manager of Rayo Vallecano strides into the room wearing formal shoes, shakes a couple of hands, and immediately embarks on a tour of the building. On the way, he shows us the former dressing rooms – all the while speaking rapid-fire Spanish as though he's on steroids – and blusters through the players' tunnel at 20 miles an hour. Once on the lawn, he turns, extends his arms and excitedly exclaims "¡Ya está!" (Here it is!).

The field of Estadio de Vallecas is the smallest in the Liga. Tucked away amongst the buildings of the neighbourhood, it consists of only three grandstands. The fourth replaced by a wall emblazoned with the words "Juntos Podemos"(together we can). 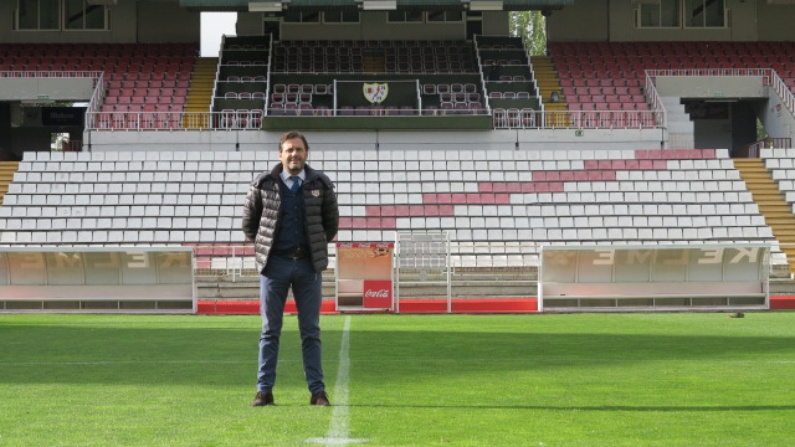 “It is a club that belongs to the people. It's the first time in my life that I've see that,” says Luis, who decided to explain everything from the substitutes' bench. The man, always impeccably dressed, took up his post as General Manager of the Rayo last year. Beforehand, this economist by training spent 4 years at Malaga, a club recently bailed out by Qatari sheiks. In other words, the opposite of the Rayo.

"When I arrived," he explains, "I saw a club where each person was vital to the operation. In general, people have their own established field of competence. Here, everyone can give their opinion, regardless of the hierarchy. Everything is collective.”

Such an internal harmony is, according to Luis, only a glimpse of the solidarity the club creates with the outside world. “Vallecas has a tradition of community and solidarity," he explains, "In this neighbourhood, huge amounts of people gather within social organisations to help get things moving along.”

Is everything so rosy?

In Vallecas, moving things along amounts to moving mountains. The area, known for being the largest working-class neighbourhood in the country, has an unemployment rate of 21% and reflects the social reality of a worn out Spain, crippled by debt, unable to get its head above water.

Last year, the Rayo Vallecano decided to save one of those drowing people. Carmen, 85 years old, was expelled from her apartment in 2014. A few months later, the club collected 21,000 euros to help the old woman relocate: "An example that shows how we try to help our neighbours as best we can," says Luis Yanez, waving away the generosity as though it isn't a big deal.

This "example" touched the hearts of Spain and the wider football world, and only boosted the upsurge of solidarity that the club hopes to embody. For this season, the Rayo released a new kit to complement the traditional white one crossed by a red stripe. In its place is a multi-coloured fringe, similar to the symbol of the LGBT movement. Luis explains: "Each colour represents a cause: the fight against homophobia, cancer, racism, domestic violence… There are 7 colours in total. When a shirt is sold, 1 euro goes to each of them.”

Such a measure recalls an earlier initiative through which 1 Euro from each season ticket went to the same social struggles. The coat of arms on Luis' jacket – baring a symbol of the fight against cancer – attests to this. The club has decided to publicly declare its support for the fight for universal rights.

But what does it do for its own neighbourhood? With a smile, the director prepares to count the ways off on his fingers, but stops, preferring to highlight a different example: "When Christmas is coming, supporters can come with a toy. These toys are collected by the club, and redistributed to neighbourhood associations who give them in turn to children who don't have anything under the tree." 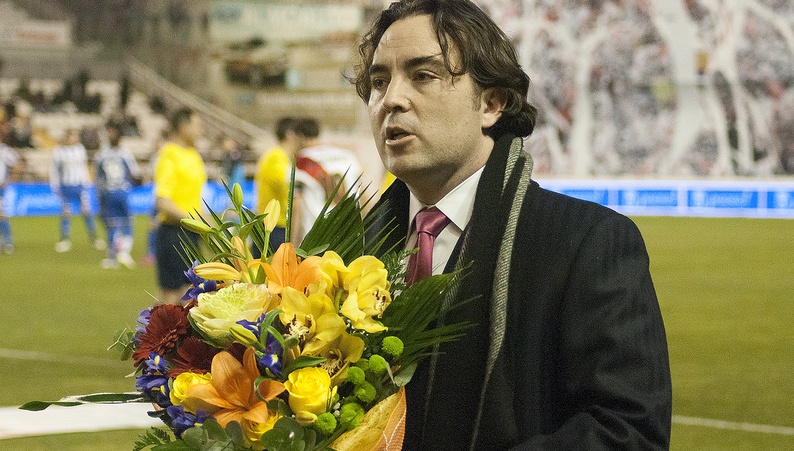 These many gestures have garnered the kind of attention that made it possible for the Rayo to construct its legendary reputation. For those who don't know him, the club's president Martin Presa regularly reinforces the idea that the club is just as worthy as great humanitarian associations. He insists that he is the only one of his kind to get a sports team to play in the humanitarian big leagues.

Quique Peinado knows this very well. Born and raised in Vallecas, the journalist has been a supporter of the Rayo for 30 years and released a book about his passion entitled A Las Armas. Quique also knows very well to what extent the club is honest in its support of humanitarian projects.

In a Galician restaurant in the centre of Madrid, the author drops an ice cube in his café con hielo, stirs it and rants: “The club has never been interested in the social concerns of Vallecas.”

According to Quique, the Rayo's recent projects are just media exposure. But what about Carmen, the woman who was evicted? “It was Paco Jemez – the coach – who helped her in person. Not the club.”

The reduced ticket price for the unemployed? "A marketing strategy – since the majority of residents in Vallecas are unemployed."

Quique explains that this reactive marketing of the club even extends to social movements on its own doorstep. "Estudiantes, the city's basketball club, opened a school for refugee children," says the journalist, putting on his glasses, "What has Rayo done? Nothing."

If Rayo does nothing, where does its reputation for altruism come from? "From its supporters", Quique explains. In A Las Armas, the author describes the Vallecas of the 80s. Drugs, alcohol, evictions. Faced with the scale of these problems and inertia from public authorities, an ultra left-wing group was founded in 1992, taking the social issues of the neighbourhood into their own hands. Their name: Bukaneros. The pirates.

"These are the guys who brought politics into the stadium. Focusing on social topics like immigration, the fight against racism…" says Quique. This was true to such a degree that Bukaneros became the principal voice for the concerns of Vallecas. Concerns that started reaching the ears of the wealthy: "Each year, some Bukaneros would enter the dressing room and give a speech to the players before the match," explained the journalist, "They reminded them that the Rayo was the club of the workers. It tended to have a small effect, and the players entered the field more motivated." 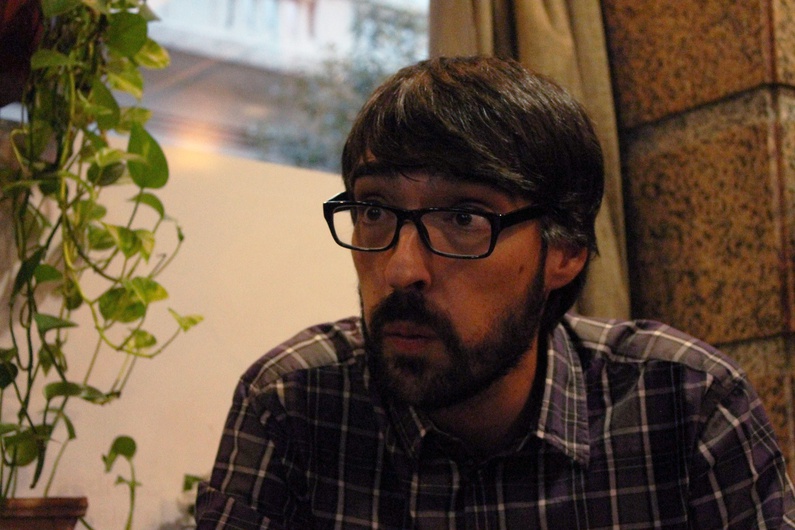 Quique doesn't expect more than that from the players. The roots of the evil lie – in his opinion – in politics. The angry journalist says that "his" club doesn't do anything to add to the political dissent in Vallecas, the only place in Madrid where the Parti Populaire has never won the elections – and the place that saw Pablo Iglesias grow in support.

Instead, "his" club was purchased by a Chinese company and has just opened a franchise in the United States. "There is a problem from the moment you include colours representative of human rights on the same shirt as the logo of a Chinese company who doesn't respect them," sighs a frustrated Quique.

For Luis Yanez, the dilemma was never a problem. Making Rayo a political club was never considered an option. "I like to think that we are a point of reference for the people of Vallecas, and have a little responsibility because of that," he explains, "But we remain above all a football club; and a club that intends to take its team as far as possible."

With all due respect to Quique and the pirates of Vallecas, this is undoubtedly the discourse that most commonly forms part of people's daily lives. At Disan, they don't care much about the role politics has to play; they prefer to speculate about what will happen this evening, out on the field against Espanyol Barcelona.

Ah well. Gabriel gives us his prognosis for the match: 3-0 to Rayo. Whether you like it or not.

Interviews conducted by Matthieu Amaré and Manuel Tomillo, in Madrid.