Virtually every young Czech has heard of their mushroom cloud stunt in 2007. Now the Prague-based artist collective is seeking to stir up trouble again with a new film 'Citizen K', an artistic experiment with false identity documents, which is due for release in January 2013

Czechs tuning into their usual morning programme Panorama on 17 July 2007 witnessed something terrifying. In lieu of a picturesque mountain scene, a fixed weather camera in the Krkonose range showed an emerging mushroom cloud. In a country where the debate about nuclear power is still ongoing, there was terror. But it was short-lived, as the truth emerged within a few moments; the mushroom cloud was not the result of a nuclear catastrophe, but the invention of the art collective Ztohoven, in which the Prague-based group had hacked into a weather camera.

You will rarely find anyone, especially a young person in the Czech Republic, who hasn’t heard of the mushroom cloud stunt. The 20-strong group Ztohoven have previously caught the public eye with art projects which involve everyday citizens. None of these, especially not the famous heart-shaped light installation on Prague Castle when Vaclav Havel stood down as president, divide opinion quite as much as the hacked weather camera. When discussing Ztohoven in Prague this winter, it’s not long before you find yourself talking about the latest project, a film due out in Czech cinemas in January. There are endless possible ways of interpreting even the title, Občan K. (‘Citizen K’). It could reference the entangling bureaucracy which Franz Kafka’s most famous protagonist Josef K gets into, or the cult film Citizen Kane, but also the late president Vaclav Havel about whom the docu-film Občan Havel was made, and who will perhaps remain the most famous Ztohoven supporter.

Then there is also the abbreviation občanka for Občanský Průkaz – the Czech word for passport. The film is based on an art project in which two Ztohoven members drive bureaucracy to the point of absurdity in a wholly unbelievable fashion. For six months in 2010, the two artists used the passport of the same, non-existent person. With the help of biometric technology they had made both their faces into a new person, legally applied for a passport, voted in that person’s name, married and obtained a gun licence. For the first time since the mushroom cloud stunt, fascination mixed with mass outrage over a Ztohoven project. Co-founder Roman Tyc, alias David Hons, was arrested. 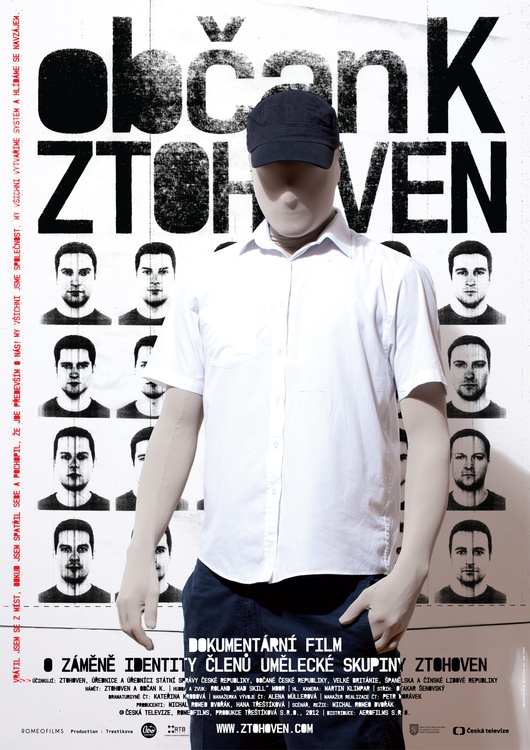 Ztohoven’s ability to divide opinions may also be due to impressive self-marketing: Although their artistic stunts generally take place in front of the general public, its members - with the exception of David Hons – have managed to remain anonymous. When they do appear publically, they use aliases which are easily spotted as a stage names consisting of Czech-English wordplay like: Roman Tyc, Dan Gerous or Anna Bolická. Even under their pseudonyms the artists shy away from journalists. Few have so far managed to meet any of the members in person. What's more, my written interview requests go unanswered. As for calling the phone numbers that are listed on the home page, no one answers.

‘In a liberal democratic society, it shouldn’t be that because of a person performing that they should end up in custody, like Tyc. What’s even worse is that he is not the only case,’ says Klára Bulantová, who is critical of the political response to the Občan K project. The politics student considers the Ztohoven style essentially sophisticated: ‘I do not know all of the Ztohoven projects, but I did like Raped Subonsciousness best, in 2003. Over the course of a single day they covered all the billboards in the Prague underground with their own posters. The other Ztohoven projects are truly original, but they are often an end in themselves and are exaggerated. But this is the vicious circle in the evaluation of art.’

'Ztohoven projects are truly original, but are exaggerated'

Although she finds some of the group’s work ‘naive, immature and childish’, 23-year-old Adela Zichačková generally supports the Ztohoven projects. ‘We can be grateful to Ztohoven for opening the discussion on these issues. The form the artists selected for expressing their objectives is appropriate and to the point.’ The criminalisation of Roman Tyc, she thinks, is a scandal: ‘This is about the freedom of art and word.’ One Prague film student, who wishes to remain anonymous, sees it in much the same way. ‘It would be frustrating if there was no-one to rebel against the 'system', no matter how lame, embarrassing, or even simple the method is. If you want to be noticed by the public, you do so with controversial actions. That is precisely the reason why art that disturbs, always works.’