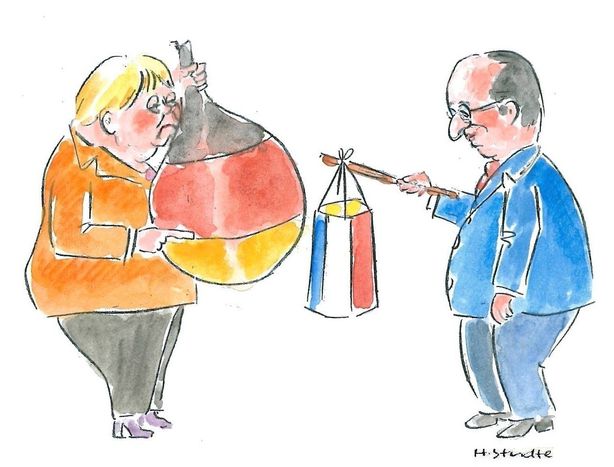 Pull the (Franco-German) wool over your eyes

Sometimes, all it takes is for a politician to let slip one comment about another country for Europe to be plunged once again into a new war of words. Who has taken their oath too far - and how do you express that sentiment in other European languages? Idiom of the week

In late 2012 a new wave of Germanophobia swept in from the south to the north of Europe, with such headlines as ‘Welcome to the Fourth Reich’, which was ran by The Daily Telegraph in the UK. No-one knew what to make of the proposition before such a weighty evil. On the other hand, today, when it’s necessary to decipher the workload of the French socialist government against the politics of austerity implemented by Germany in Europe, the French expression to take bladders for lanterns (prendre des vessies pour des lanterne) seems fitting, much like the Italian saying taking fireflies for lanterns (prendere lucciole per lanterne).

One word was used by the president of the national assembly in France which could have sparked the flame – ‘confrontation’. Considering the 50th anniversary of the Franco-German relationship in 2013, Claude Barolone made a severe faux pas. He was severely mistaken, and in line with a German expression, took an X for a U (ein X für ein U vormachen). The obstacle before him was so big that effectively someone had set a bear on his back (jemandem einen Bären aufbinden).

In the UK, where citizens are well-known for keeping their distance from continental disputes, they concept of disguise is alluded to. The Brits would tell the Germans that the French are clearly pulling the wool over your eyes. In any case, for the Brits this ‘confrontation’ is impossible because you can’t put lipstick on a pig - in other words, make something fine out of something so crass.

These references are flourishing in a Europe where disappointment prevails. In Poland, you can easily and alternatively take someone for a horse, an egg, a balloon or a ham (zrobić kogoś w konia/jajo/balona/szynka), but you can also just as easily let someone go to the strawberries (wpuścić kogoś w maliny). On the other hand, since Germany controls everything - including wiping out football teams - the Spaniards have become more prosaic. If someone is getting excited about something, it’s just that he or she has lost half of their mass (No te enteras de la misa la mitad). So Francois Hollande’s foreign policy must also be on a kind of diet...