In July 2017, masses in Poland took to the streets to protest judicial reforms. Since 2016, Poles have been mobilising time and time again to express their rage against the restriction of abortion laws. Protesting in Poland is tiresome to say the least. Will the country’s youth hold on until the 2019 parliamentary elections?

As a member of the LGBT+ community in Poland, Jakub Supera always believed in the importance of democracy. Having grown up in a country that treated him as a second-class citizen, Supera sees democratic values as the only solution to ending discrimination. The 25-year-old was born in Warsaw and has been participating in different protests for several years. However, when the July 2017 protests against judicial reforms broke out in over a hundred Polish cities, something peculiar about the uprising took Supera and many others by surprise. “Many young people who were entirely apolitical before also took part in the protests. It was an unusual situation. Everyone was out in the streets,” Supera recalls.

Last July, the governing Law and Justice Party (PiS) passed new laws that would drastically limit the independence of the judiciary in Poland. Angered by the move, tens of thousands of Poles – including many young people aged 20 to 35 – took to the streets of Warsaw to protest what they saw as curbs to democracy in the country. Although protests are nothing new for Polish people, the country has witnessed several uprisings over the course of its history. According to the Polish public broadcaster TVP, the July 2017 protests were “the largest demonstration in Poland since the end of communism in 1989.” 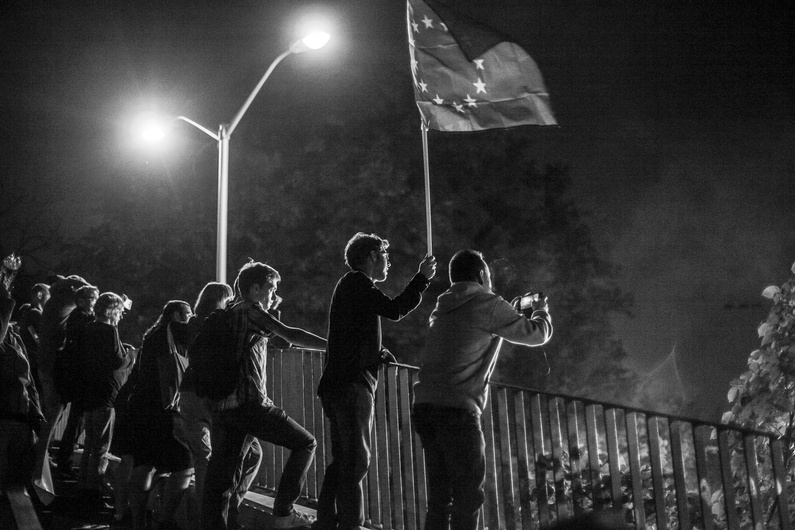 But what motivated these young people to step out of their comfort zones and take part in the protests? What was the driving force behind their participation? For Rafal Smolen, a researcher from the University of Warsaw who described himself as a “liberal with some left inclinations to socio-economic issues”, it was protesting the actions aimed at destroying democracy and rule of law in Poland. “I didn’t believe these protests would stop the ruling party and the president, but in my opinion, they could make the bills a little less damaging. That was my first motivation to participate in the protests,” Smolen says, “I see protesting as a civic obligation.”

Mateuz Luft, a 30-year-old radio journalist from Warsaw also joined in. “But I went to the protests to officially report it for my radio and talk to people,” Luft explains. “I soon became engaged because I wanted to have a first-hand experience of the protests. It was an important time for my country.”

Many young Poles grew up believing in freedom, democracy and Western European values, paying little attention to the life lived before 1989. Last July, however, something changed as young people appeared not only to be politically engaged but also much more aware of their democratic rights. As a result, protestors spent seven to eight days on the streets because they felt very strongly about the issue at hand and were convinced it was their civic duty to raise their voices against injustice.

“Part of [Polish] society has been angry for a long time, [the only difference] is that earlier, this anger was a private emotion,” remarks Pawel Cywiński, the young founder of Polska gościnność, an organisation that promotes an open society, the rights of immigrants and refugees. “When the ruling government started shifting the country to the right, it pushed Poles to make their anger and their frustrations public.”

More than half of Polish Internet users use social media to stay informed, which is especially a trend for the younger generations. Facebook – the most popular social network in Poland – played an important role in the mobilisation and organisation of people during the July 2017 protests. When the protests erupted, everyone’s social media feeds were filled with images and posts from the protest. It was a snowball effect, motivating young people to become participants in the protests themselves. Social media as a tool for mobilisation was a new phenomenon; in the past, Poles mostly relied on word of mouth or information disseminated by traditional media outlets. 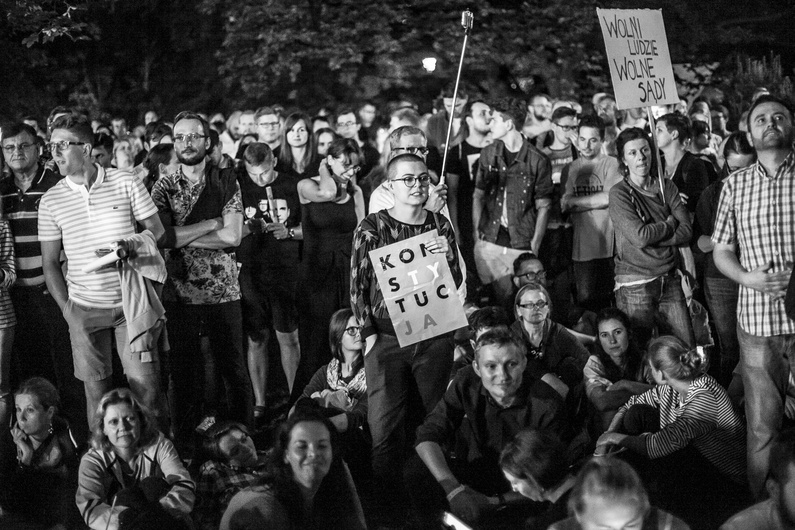 “[Most of the] people were on holiday and the middle class that always protests in Warsaw was absent. So when the government made their move, vacationers from Warsaw to smaller cities were the ones to start the protests, and it spread throughout the country through social media posts,” Pawel Cywiński says, “otherwise it would have been confined to Warsaw.”

Cywiński also remarked that live videos and tweets posted by protestors induced a sense of political awareness among young people who had never voted before. Group leaders, who were predominantly ordinary citizens and had no political affiliations, delivered strong speeches related to democracy and the rule of law. When these videos made their way to social media, the number of participants increased.

Privately owned media outlets also played a role in informing and mobilising citizens, reporting minute-by-minute. “Gazete Wyborcza, a well-known newspaper in Poland, was handed out for free. It not only ran news related to the events, but also informed the masses about the timing and location of upcoming protests,” Cywiński recalls.

According to sociologist Ludwika Wlodek, who teaches at the University of Warsaw, some young people joined the protest because they found it fashionable, while others participated due to peer pressure. Still, most participants made a conscious decision to protest. “Social media played a very important role as people posted motivational statuses that triggered reactions,” Wlodek observed. She also made reference to the use of Facebook posts and events created by ordinary citizens.

Seeing so many protestors on the street, Poland’s TVP television channel (controlled by the state) called the protests “an attempt to organise a coup against a democratically elected power.” Protestors were cordoned from the main entrance to the Parliament by barricades erected ahead of the demonstrations.

When the government saw that the protestors were in no mood to give up, President Andrzej Duda stepped in to veto two of the three controversial legislations proposed in the bill on the 24th of July. The protestors dispersed. Still, the Polish opposition as well as the EU later warned that the revised versions, drafted by President Duda’s office, continued to threaten the rule of law in Poland. This led to a new, fresh wave of protests later last year in November. 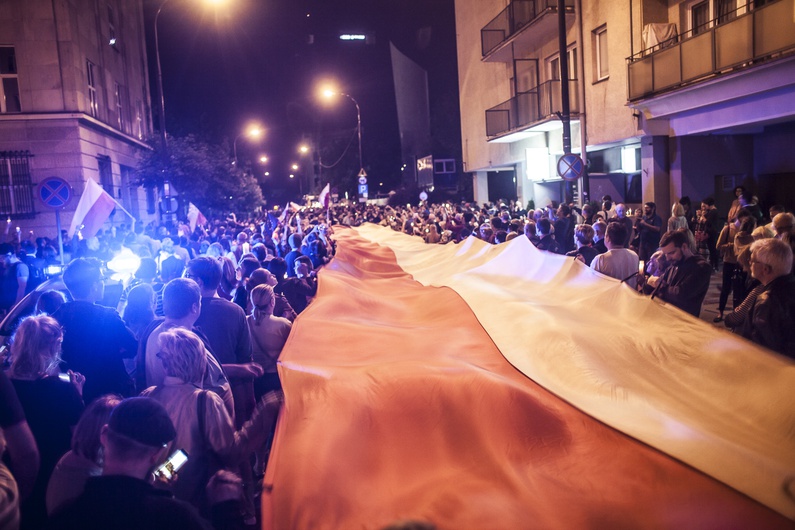 The protests in November didn’t stop the government. Its undemocratic actions led the European Union to trigger Article 7 (also known as the ‘nuclear option’) against Poland, which would ultimately result in severe penalties including, among other things, the suspension of voting rights in the Council.

Protesting in Poland is a tiresome battle. Similar to the judicial reform protests in July 2017, the Czarny Protests against the restriction of abortion laws across the country have been an uphill climb. In 2016, two initiatives on restricting abortion laws had been introduced and later rejected by the parliament. Earlier this year, a new ‘stop abortion’ bill was on the table and Poles took to the streets once again. More recently, on Friday March 23rd, mass protests broke out yet again across the country against the tightening of the abortion law. It is a never-ending story.

The July 2017 protests marked the beginning of a new era for Polish people and Polish youth in particular. With the Polish parliamentary elections taking place in November 2019, the protests certainly helped create political awareness among the youth who will vote for the first time. Protesters say that they will never give up and will fight for the political well being of their country. But will they sustain this commitment and fervour in the future?

“Despite the fact that the protesters have gone home, they are still silently protesting – in their hearts and minds – and are aware that the current government is authoritarian,” Jakub Supera, the LGBT+ activist, says, with a glimmer of hope in his eyes. “Polish youth love democracy and want the country to stay in the EU. Given the current situation, I think that Polish youth will not vote for PiS in the future,” he says. Only time will tell.

This article was written by Sarah B. Haider and Malika Bayaz, and has been edited for Cafébabel. It was originally published on March 19th, 2018 on Voices Of Change, a storytelling project about politically and socially active young people in countries struggling with democracy.