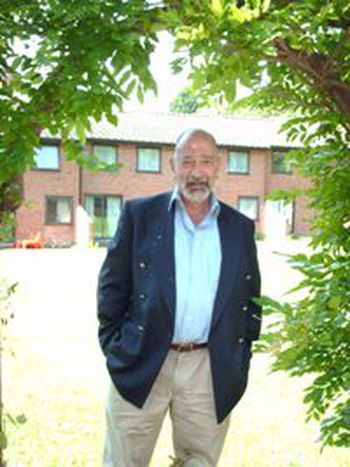 Colleagues caution me about interviewing professors. As a junior reporter, you often face two unwelcome scenarios. Either the don regards you as a complete newbie and becomes highly superficial in his answers, refusing to go into any (potentially newsworthy) details. Or else (in rare cases) the ‘prof’ considers you as ‘one of us’ and swamps you with sophisticated jargon and off-the-cuff theorems. Regardless of the response, you will be unlikely to write up a good story.

No such problems arose whilst interviewing Professor Francis Antonie. Antonie speaks in a gentle, even manner and is willing to elaborate on issues I hardly consider myself an authority in (for instance, the traditions of the Maronite church and the structure of the South African economy).

As head of Africa’s leading school of governance, the School of Public and Development Management at the University of Witwatersrand in Johannesburg, http://www.wits.ac.za/depts/wcs/about.shtml), Antonie can be considered one of the continent’s leading academics. He is also a director of St Augustine College, South Africa’s first ever Catholic university. The institution has only recently emerged on the educational landscape – opening its doors in July 1999.

In his ‘40s, Prof Antonie joined Standard Bank, Africa’s largest commercial bank. Here he served as senior economist and later as the group’s senior policy analyst. Some of the highlights were the formulation of the Business Trust and being involved in the policy formulation around government’s public works programme. ‘I enjoyed setting up the Business Trust with the chairman of the bank, Conrad Strauss. The Trust is a fund that pools resources from government and business in areas of common, national interest. Also, I liked being involved with governmental public work programmes, aimed at boosting the country’s high unemployment rates.’

Antonie has also been a cross-border player. For five years, he was member of the Africa Region Steering group of the World Economic Forum. As well as this, he helped coordinate the 2000 Vatican jubilee year, especially with regards to the policy making on debt relief. ‘The problem with this issue is the moral hazard: if we provide full debt forgiveness, politicians will just resort to more and more irresponsible borrowing.’ Antonie decided to stick to one general principle: ‘no debt forgiveness.’

‘But,’ he grins, ‘We also allowed for hundred percent exceptions to this rule!’

Today’s youth, Antonie asserts, face unprecedented struggles. ‘Young people have some major challenges. They have to try and mould an identity of themselves. In today’s world, the 21st century, it is extremely important that one finds clear values to inform ones life and work. Yet, value-based life in a secular environment is a continual challenge.'

Antonie was raised as a Maronite. These are members of the Eastern Catholic Church, who retain their own liturgy and hierarchy. Still, they have historically always been in full communion with Rome. The community’s Arabic roots make them particularly suitable as a linchpin in East-West dialogue, according to Antonie. ‘I feel we can play a strong role in establishing some kind of equilibrium in the Middle East. The specific cultural form of Catholicism that the Maronites exhibit means we have more common ground with the Arab nations.’

In the 1970s and ‘80s, Antonie was involved in anti-apartheid movement; he was consequently detained. How did his religion help him endure these times of deep political and social strife? ‘In moments of crisis we are really confronted with ourselves. When stripped of the support you would otherwise rely on, the power of prayer and reflection becomes apparent. Yet, at the same time, these difficult times are also a crisis moment for our faith.’

What is important, believes Antonie, is that one ‘has hope’. ‘Being hopeful isn’t easy. One can have many frustrations – in one’s failings and in the failings of others. Yet, this is part of being a human being:

‘Out of timber so crooked as that from which man is made, nothing entirely straight can be carved’ - Kant

Although he has returned to the lecture theatre, Prof Antonie remains highly engaged with the day to day workings of the banking industry and the economy as a whole. ‘The government’s main goal in South Africa should be to help eradicate the massive unemployment rate – about 26 percent. Two requirements should be met: interventions should be as extensive as possible, but also sustainable.’

Antonie describes himself as a ‘moderate economist’, a ‘5 percent growth man’. ‘Essentially, I’m pro-market. But I know the limits of markets, for instance when it comes to serving the marginalised people. That is why I believe in a mix of supply and demand side measures. Yet, when it comes to support from the EU and the US, they’ve never let the markets work. What Africa need is to trade, not just to receive aid.’

At the same time, Antonie doesn’t believe in solely focusing on material solutions. ‘The church plays a very important role in the economy. It should remind us of the social obligation to honour the individual as a person, made in the imago of God - not just a consumer. This will help foster social cohesion, a very important challenge in a highly unequal society.’

Antonie is wary of the surge of extremist beliefs, which he argues is happening across the board. ‘There is a rise of fundamentalism all through the great monotheisms. For me, belief is in some ways predicated on doubt. But I won’t expand on that: this is probably enough to get theologians sending me letters!’