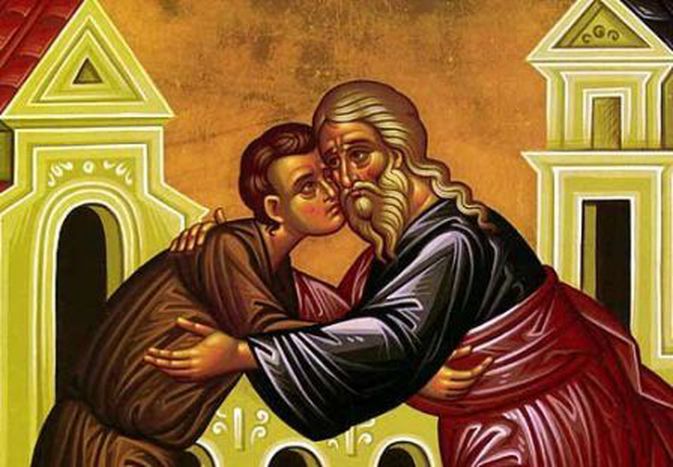 by Georgios Kokkolis It's really awkward what strange games Fate can play. Of all the days of the year, no one could be more appropriate than the Sunday of the Prodigal Son in order for the Greek parliament to vote on the new measures for the salvation of the country.

According to the parable, a father had two sons.

Once, his younger son decided to leave his family and asked for his share of the property to live elsewhere. After spending even the last penny, the son returned remorseful in the arms of the father, who he not only accepted him back but he also ordered to slaughter the 'fattened calf' for a celebration meal.

Following the same pattern Greece after wasting all of the money that was borrowed now has turned to Europe for help and salvation. The Greek parliament was asked to take the hardest, most painful measures affecting almost the entire Greek population in order to rescue once again the country. Whether this option would be salutary or disastrous for Greece we will soon find out, but what matters is that the vote closed permanently an era of artificial dreams and an illusion of bliss that collapsed like a house of cards.

All is well then. The "prodigal Hellas" returns, repents and turns in the arms of the Father. However in our story the "Father" instead slaughtering the  'fattened calf' chooses to leave hungry the prodigal son by giving him so little food just to survive. Instead of love the Father in our parable not only wishes to punish the returning son but also to admonish the other son who never fled.

However are we confident that Greece is the 'prodigal son' of the parable?

Let's play with etymology: In the original Greek of the Gospel the word for 'prodigal' is άσωτος (asotos) meaning the one who cannot be saved, not the one who returns or the wastefully extravagant. This reveals a logical contradiction in our history. Why the returning son who repents can't be saved? Is there no salvation for the one who changes his life and gets back to his family humiliated?

Yet the prodigal son is not the young but the older one. He was not the one who left and returned penitent to the Father. The prodigal son was the other, the elder son who never left. He envied of his brother who not only made his 'revolution' and left, not only he had fun, but now he returns and the Father welcomes him back by giving him the best of his clothes. Remember his reaction – he felt angry and complaint to his Father that while he was always by his side, working for him he was never offered not even a goat to host a meal for his friends. He didn't speak to his brother an left. He is the real prodigal son.

Of course politics have little to do with evangelical parables and it is not clear whether in our own version of the story Germany and our partners have the role of the father or the elder son. The interesting thing is that their attitude will eventually show us which role they will choose.

Let's just remember two things: First, EU member-states do not help Greece – they lend her. They are speculating on the back of a country that yes, has made terrible mistakes and mismanagement in economics but in the end it didn't anything different from what everyone else did in the eurozone. The difference is that due to its structural problems the end of the 'frenzy party' of the euro-decade smashed everything with it.

The second things is that the EU member states are jointly responsible for the destruction of Greece. They did 'paper exercise' by setting fictional goals which led to recession, working together with a political system that they knew that was unwilling to reform. What is even  worse is that they insist on this failed recipe without receiving any social criterion on the wages or the pensions they cut. The result is that they impoverish a whole nation in order to satisfy their political audiences.

Along with the above let's add a third element as well: that "prodigal Greece" wants to stay in Europe, believes that is part of Europe and is sharing the same ideals. And yes, Greek society feels guilty. There is a general feeling that Greeks lived beyond their means thus fooling themselves and their partners.  And yes, beyond the 'lazy Greece' there is another Greece, which is working and fighting and wants to stay in the euro and not to make a fifty-year U-turn.

If punishment and humiliation of an entire nation is more important than solidarity and salvation of a partner then it is clear towards which direction European Union is moving. If so please throw Greece out now, because in such a union it does not deserve to belong.