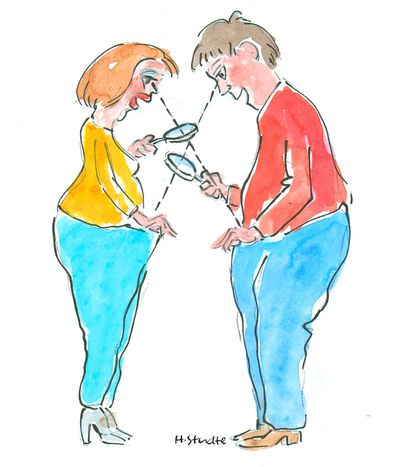 We stand on the doorstep of a subject which is a lot more intimate than we think. Here is the key to another dimension of European integration - a small dictionary of sexual terminology

Private parts is the most neutral reference to male and female genitalia, which also double up as the nicknames for 'Williams' and 'Frances' all over the world: a penis is most popularly called a willy and a vagina is known as a fanny. Dick is a more vulgar name, coincidentally derived from the name Richard. Kids grow up reading about every 'Tom, Dick and Harry', a 16th century phrase to describe a set of people. Adults know that one Dick does not equal another…

Count on the French to bring in the fun. Gustave Courbet’s 1866 realist image of a woman's genitalia up close, The Origin of the World (L'Origine du Monde '), does not arouse shame, but waves of admiration at the Parisian Musée d'Orsay. The frogs call the female area la salle de fêtes (the ballroom), whilst the Germans blush at die Scham (shame) or Schambereich (place of shame). Ironically, they also call male memorabilia Gemaecht, derived from die Macht which means power, a little like how the Italians wield their 'sticks' (verga). It's the same in Spain, where all references to lady's parts are negative (coñazo, from coño meaning vagina), and all masculine tinted sayings (es/ eres la polla, or 'he is / you are the penis), are positively doled out.

Like the English, the Poles discreetly refer to a man's package (wyposażenie). On unpacking this, the Italians find a pisello (pea) where the Poles will find a bird (ptak). What a way to let the cat out of the bag, and the French, Poles, Italians and English to their respective games of cat(la chatte),mouse(myszka),butterfly(farfalla)andbeaver.