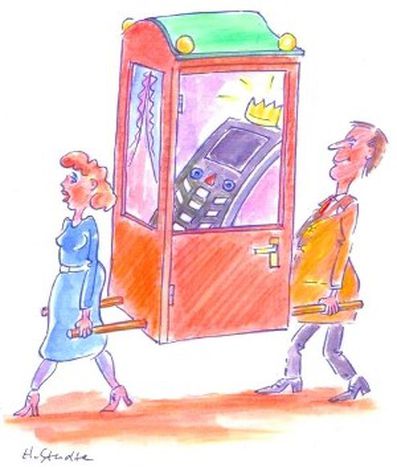 It cannot be denied, a mobile phone certainly is practical, handy even. German people, with their strange fondness for the English language, use the pseudo-English word Handy to denote that which Brits call a mobile phone. Handy in English means practical, hence the word ‘handyman’, meaning someone who is practically- (and not telephonically) minded. But it is certainly handy that a mobile phone can be carried around – the French reflect this by calling it a portable. Putting it another way, such as in the Spanish for instance, a mobile phone is and makes you mobile (móvíl), both in Europe and across the world, such as in the USA, where you will see people using cell (cellular) phones. As with the Italian cellulare, this has very little to do with prison cells, but refers to the structure of mobile phone networks, which consists of a mesh of cells.

Translated from Praktisch, so ein Handy