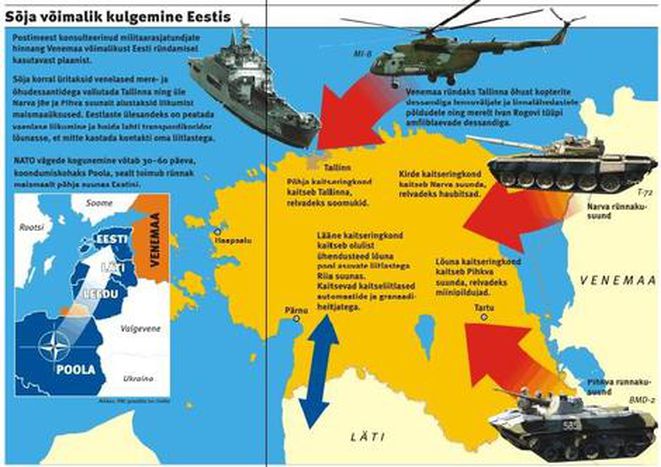 Postimees: Estonia Wakes Up With a War Plan

Waking up with Postimees today offered us a bitter surprise: Estonia might be invaded by Russia and now we even know why. Luckily not when.

And, strangely, it looks like someone forgot about the European Union

“ Since we started with this local part of the magazine, we tried to avoid these kinds of articles so, the first thing I want to do here, is to apologize with all the people who will not share my views: for some days I kept everything for myself and I did not write any single line about the Russian-Georgian crisis but now everything is going too far for staying silent.

Secondly, what I need to make clear since the beginning is that what you will find here is nothing more than my personal opinion and not cafebabel.com position on the current events. ”

I do not understand what people want and which sense of belonging they have anymore.

I grew up being as much European as I could, participating to European projects, living in as many different EU countries as I could, sharing my experiences with my fellows Europeans and learning from their ones.

I went to schools explaining what EU is and which are the advantages of being part of one of the most ambitious political projects in world’s history, I gave my contribution to bring people to Brussels and make them feel a bit more part of a mechanism that needs to be understood for being accepted and I started to contribute to cafebabel.com as much as I could exactly because I shared the founders dream of the construction of a pan-European public opinion.

And I do not think I have been doing it simply for being victim of any effective propaganda machine: I studied Spinelli and Delors dream and I started to see myself reflected in it.

I started to think that if Europe exists, it cannot exist without me. Because its history, its culture and its values are my history, my culture and my values.

But, growing up and working on and with it, I learnt that being part of the European Union does not mean only getting advantages and positive things. It means also being aware of its risks, its challenges and, why not, its limitations.

Something everyone should learn how to deal with.

Then the Russian invasion started.

And someone, freely, chose to put the EU on standby for acting as a single entity, detached from any kind of community.

Since years, here in EU, we have been struggling for building a Common Foreign Security Policy: so far we did not succeed to get exactly where we wanted, but the fact that now if anyone wanted to “call Europe” he should dial Mr. Javier Solana’s number is already an enormous achievement.

But, again, the Russian invasion started.

And while Mr. Sarkozy started his diplomatic talks with Mr. Putin – or Medvedev ?  - on behalf of the Union he is representing during this semester, someone else decided that it is time for pushing on the gas and try to bring the already though relation between Russia and EU neighboring countries to its most dangerous limit.

Sometimes it is almost populist to get back to April 2007 for explaining how problematic the relations between Russian-rooted and Estonian citizens is in our country but, today, I guess it can be a good starting point. Because, differently than the rest of the EU, everyone here has all the violence of those days still deep inside.

No one forgot what happened as no one will ever forget what this country was before the Nineties.

But, as we all have to live and share the same space, something should be done for explaining to people how to accept each other and get rid of those dangerous emotions left from a terrible past.

Not an easy task, this is sure.

But what would the politician job be, without such challenges?

Which message are journalists and opinion makers supposed to offer to the population?

In the last days I have seen, red and heard local politicians simply saying what their voters expected them to. Someone said that Russia did not invade South Ossetia, someone immediately jumped against Russia, someone sent people to buy Georgian goods for supporting the country and someone forgot to ask Mr. Saakashvili why he kept the European flag behind him during his speech. Details.

Then I opened today’s Postimees. 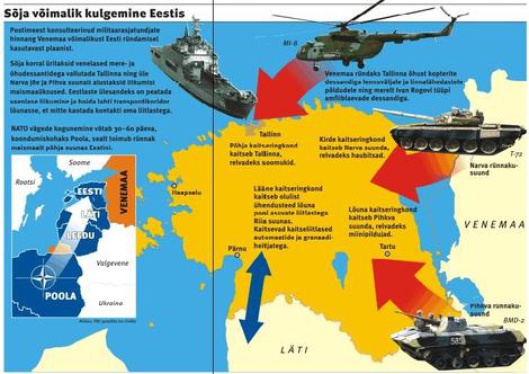 At pages 6 and 7 Mr. Vahur Koorits writes an interesting article about something which is unlikely to be happening as long as people do not keep pushing for it: a Russian attack to Estonia.

With the precious help of Leo Kunnas and a wonderful map, we are enlightened about a possible imminent future: we know from where we will get the tanks, from where the Russian air force and from where NATO troops will come. Thanks to this brilliant analysis we even know that the trip between Poland and Estonia will take between 30 and 60 days so, please people, help the soldiers on defending the country in the mean time.

Or, better to say, get ready to defend Tallinn because the rest of the country – as often happens up here – will not be that important.

Now, seriously, is it a kind of expired and stinky April’s fools joke or what?

What is the need to write about an imminent war which is NOT happening?

What happened to the common sense of that people who should be trying to compact in such a delicate moment?

Estonian economy is sick. Someone say crisis, someone said recession, someone else just said that it will pass. What is true is that it is not going fine anymore.

People are unhappy, they have to pay loans back sacrifying half of their salary and now they are somehow worried that a terrible kind of past will come back.

We are less than 2 Million people in this country and, let’s accept it or not, a considerable percentage is Russian-rooted and not really integrated into the national system. Opinion makers job is to help everyone to accept each other, not to split people in different sides.

And, in this sense, I am sorry my dear Postimees but you committed suicide today.

What I would like to ask to all the readers who got till this point is: what happened to the people who should avoid all this?

Who should help people to feel more secure and safe if not our politicians?

Why in Postimees map the EU flag is totally absent?

Why Estonian politicians do not try to raise everything at the EU level for using diplomacy instead of anything else?

Why do they keep ignoring all our efforts targeted on our future CFSP by signing visa free agreement with US and taking whatever position they want in they foreign policy?

European Union is a great project: full of advantages but also of costs everyone should know. Anyone has been invited but, as it is an union of States, no one will ever be obliged to stay in if they do not want.

Or they do not accept its conditions.