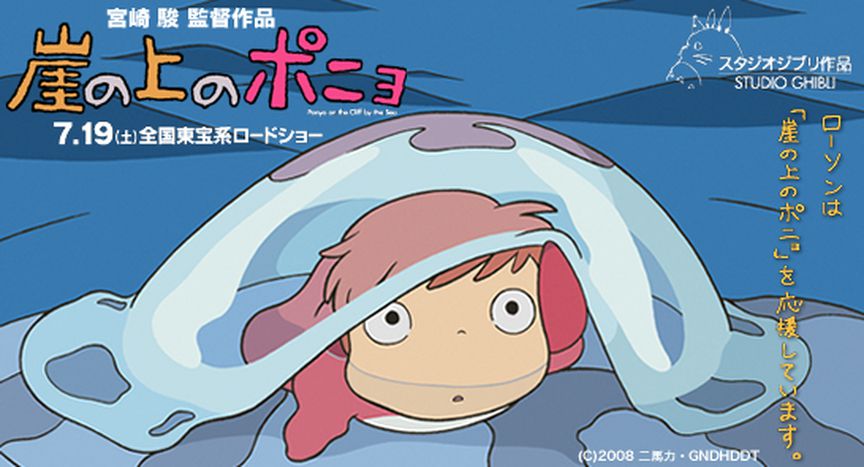 THE WRESTLER – DARREN ARONOFSKY (USA 2008) It is hard to decide to watch a movie from Miyazaky, especially since he started spoiling his loyal spectators with great works one-after-another: expectations are always high as high is the risk to be disappointed.

But this was not the case as, once again, the Master managed to get the favor of the audience –and mine- thanks to his sensitive way of showing the beauty and the pureness of the nature.

The story tells about Pony- a small goldfish who, intrigued by the light that comes from superficies of the ocean, decides to escape from his underwater world and head towards the exciting unknown without any clear idea on what to expect on the other side.

Once reached the surface it meets Sosuke, a five years old daughter of a sailor and Lisa, a comprehensive mother. Sosuke introduces Ponyo to the peculiarity of the human lives driving it to an incredible experience through the discover of concepts as taste and colors, something which cannot leave the small and curious goldfish insensitive

Ponyo, in fact, begins his personal tragedy by trying to go against the laws of nature and desiring to live something which is more than forbidden for a fish: living as an human.

As it happens in many old tales, the desire and the will of going against what already set by the natural order of things can bring only catastrophes and disasters and, in this point, Miyazaky do not make an exception: a tsunami (and during the screening our thoughts easily turned to 2004 Tsunami) made by waves with the shape of enormous fishes floods onto the small island where Sosuke and Ponyo are living.

To save the islanders, Mother Nature (Ponyo’s Mothers) goes to Lisa to understand how they live with the nature, and it is in this moment that the romanticism and tenderness emerge.

The dialogue between the two mothers and the fact that it is possible to forgive the curiosity of a child is a touchy lesson the director sent through his work.

At the end Mother Nature permits to Ponyo to pursue its dream and become human and this is a point where, in my opinion, Miyazaky express a precise idea: it is only by respecting the nature and understanding its rules that we can save the world from the foolish destruction we are causing. Only respecting Nature as a whole, and not only caring about those few human beings populating the surface of the planet.

Movie related: Nausicaä of the Valley of the Wind – Miyazaky (1984)