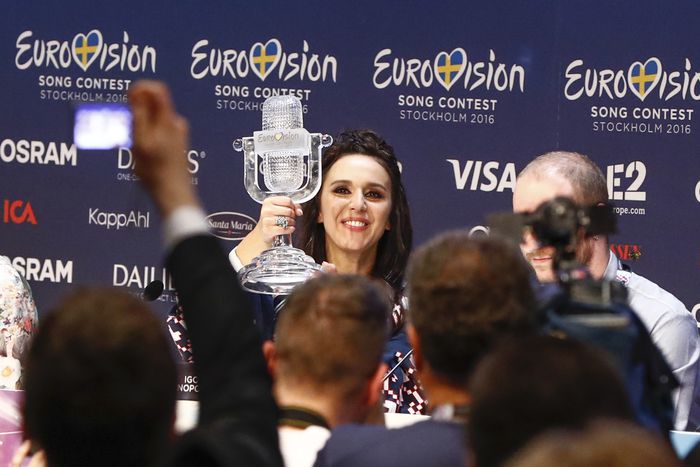 The victory of Ukrainian singer Jamala at the Eurovision Song Contest has chafed Russian-European relations. Her song "1944" deals with the fate of the Crimean Tatars expelled by Stalin. Russian politicians have criticised the performance as an attack on today's Russia. How much politics can the Song Contest handle?

See you at the ESC party on the Maidan - Die Tageszeitung taz, Germany

With her victory singer Jamala has finally got her country back in the headlines, the daily paper taz comments: "People are talking about freedom and the crimes committed against millions of people many years ago. Jamala, the clever singer, says that those times must not simply be swept under the carpet - because if they are, mourning isn't possible. What a politically astute message! But her most important message was: We want Europe to see us Ukrainians and not forget us. We just want the Russians to leave us in peace. We have been part of Europe for a long time already. That says it all. See you in Kiev - probably at the ESC opening party on the Maidan. Now that's something to look forward to." (15/05/2016)

Chipping away at western self-confidence - The Times, Great Britain

Russia's indignation at the result of the Eurovision Song Contest is bound to chip away further at the West's already dented self-confidence, writes Hugo Rifkind, a columnist for The Times: "This is the point of outrageous Russian outrage over Eurovision. It seeks not to convince, but to unnerve. To tarnish. Even in Moscow, they must know that no western government would bother fixing a song contest, or even a book prize. My God, the effort, and for what? Sow the seeds of paranoia, though, and they take root in a thousand tiny cracks. Next year, I bet, the Eurovision voting system will be overhauled again. Nobody will care; nor should they. Yet another tiny piece of western self-confidence will have fallen, like yesterday’s sequin, into the dirt." (17/05/2016)

Jamala's song is clearly an attack against Russia, professor of philosophy Dimitris Patelis writes in Efimerida ton Syntakton: "Is it a mere coincidence that the junta in Kiev chose this song? The song could have been an innocent hymn about the drama of a nation - but not at this point in time. … The ghosts of fascism and Nazism are rising up once more in Ukraine, in Europe and all over the world. … This is another act in the propaganda war, with extremely negative consequences at the ideological, political and geopolitical levels: a justification for the regime in Kiev and for a resurrection of the Nazis. The anti-communist and anti-Soviet stereotypes are being revived." (17/05/2016)

Politics has no place in song contest - Kainuun Sanomat, Finland

The ESC should stay away from such sensitive issues, warns Kainuun Sanomat: "With their vote the Europeans have sent a clear message that they don't approve of Russia's operations in Ukraine. This is a valuable message but it contradicts the values of the Eurovision Song Contest. The ESC has already adopted a stance on difficult subjects like sexual equality. … Politics, however, harm the contest. Next time round Poland may point to Nazi Germany's atrocities or Finland may demand the return of Karelia or Bosnia and Herzegovina may evoke the Srebrenica massacre. Politics has no place at the ESC. The organisers must do a better job of enforcing this next year." (16/05/2016)