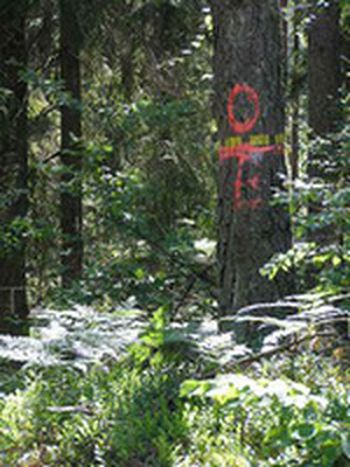 North-eastern Poland's Rospuda Valley, known as the 'green lungs of Europe', is a Special Protection Area of Europe's Natura 2000 ecological network. But the government has controversially decided to construct a new bypass through the valley's forests and national parks, citing significant cuts in costs and time. The element going through the highway includes a half a kilometer long wharf, supported on pales, which would pierce 10 metres deep into the quagmire and turf.

Ecologists however say it is cheaper, more environmentally-friendly and legal for the highway to pass from the west by Augustów, a small city with 30,000 inhabitants. The day after construction began on April 4, Adam Wajrak, prominent Polish ecologist and journalist at the social liberal daily Gazeta Wyborcza ('Election Gazette'), blogged that if the bulldozing continued into the Valley, 'it would be an important signal that the government cares neither for public protests, nor for the opinion of the European Commission.' So far, matters are safe; the government has promised that no works will take place until the end of July, when the bird-breeding period ends.

The Paneuropean Transport Corridor, also called Via Baltica, is a fast-speed route connecting western Europe through Warsaw with Baltic countries up to Helsinki. The investment began in the mid-nineties. It was Marek Strzeliski, a post-Communist Democratic Left Alliance (SLD) party representative and then governor of the Podlaskie Voivodship (the Valley's region), who decided in September 2005 to set the route to cross the wilderness.

Augustów is one of its most important communication points, lying on the route of a high traffic highway connection between Poland and Lithuania. Every day, 5,000 trucks drive through the city. It is not surprising that the city’s inhabitants support the creation of a highway, which would bypass the city and divert transit traffic, blaming high traffic for causing numerous accidents (although hard data proves otherwise). On TVN 24, a major Polish TV networks, a local police department spokesperson commented that in 2006, 22 accidents in the city caused 4 deaths.

The issue of the Rospuda Valley divides Poland, including the Kaczyski family, into two opposing camps. Prime Minister Jarosaw Kaczyski endorses the governmental solution. But his twin brother president Lech and his wife Maria support the eco-friendly alternative. The latter told journalists that 'once the highway is built it will be difficult to restore the natural beauty of this place. This symphony of nature cannot be rebuilt by men.'

No joking around with the Commission

EU law only relaxes the Nature 2000 programme 'if compelling reasons exist.' And despite a Brussels visit from Environment Minister Jan Szyszko on February 26, presumably to reinforce this, three days later the Commission threatened to withdraw a part of the 67 million Euro donation which Poland was supposed to receive before 2013.

Many other European countries, such as Germany, France, Italy, Greece and Portugal have already paid the consequences for not complying with EU law with the natural environment. Italy received a fine of 19 million Euros, capped off with 200,000 Euros for every day of delay in implementing the EU recommendation. In December 2006, the French fine reached 38 million Euros for for its failure to update national laws on genetically modified (GMO) crops and foods. Every day of delay would have cost France an additional 360, 000 Euros.

'This is a confusing decision in the light of a meeting held two weeks ago with Polish ministers for the environment, regional development and transport, who agreed to uphold EU law while constructing the highway,' said Jose Manuel Barroso, current president of the Commission on February 10 in Warsaw.

The worst-case scenario is if Poland builds the highway traversing the protected territories, and the Commission later rules for it to be taken apart. Rospuda Valley's natural beauty would be destroyed, and the highway would not be completed anyway. But what about after July, when the bulldozers crawl off standby after the breeding period of the birds ends, to flatten the Valley?

Fauna and flora ('animals and plants')of the region

The sounds of Rospuda Valley (subtitles in English)