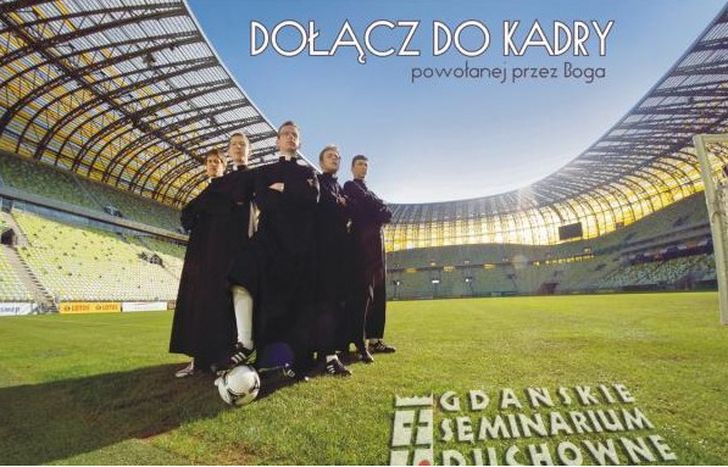 Empty tribunes of the PGE Arena (the recently built Gdańsk stadium), freshly laid grass and five set of robes proudly rustling it. After all Europe's high-profile sporting event is also a chance to score and join the team of God, according to the Gdansk seminary

What an era. The JP II generation (of 20-30 year olds named after Pope John Paul II – ed) is all grown up. The Polish 'moher grandmas’ (after the mohair berets they wear in winter - ed), a group of devoted and aged catholics known for supporting the 'patriotic' and homophobic catholic radio station Radio Maryja directed by the (in)famous Father Rydzyk, are battling to defend the dwindling sense of 'true Polishness'. On top of that, the catholic church is turning into a 'victim' of multiple moral scandals. The Gdańsk diocese apparently judged that was high time to take decisive action.

That's why its gangster-looking trainee priests must have posed for a recruitment advert in one of Poland’s football stadiums. One of the five has even thrust his leg upon the official football of the euro 2012 championships, being jointly held in Poland and Ukraine between 8 June and 1 July. This is an authentic advertisement by the Gdańsk seminary. It’s no joke, as the posters pinned inside the diocese's churches and city’s high schools show and the official site of the Gdańsk seminary show.

Internet forums are ablaze with astonished reactions: ‘It is the beginning of the end of this institution'. Rage and criticism ('God’s team is no less subject to corruption that a team of football activists') mix in with accolades: 'The idea goes hand-in-hand with the modern spirit. It’s a nicely worded slogan and the underlying motive has the power to attract youth. Like'.

Yet on closer analysis, the majority of these online reactions contain the recurring words 'shame' and 'provocation'. After all, how do you justify a job advert which should only be recruiting those who feel a true vocation for such a position? For some the advert is corporate 'face' for the catholic church, whilst for others it borders both on creativity and unoriginality. The cold-blooded representatives of the Polish catholic church do not seem to be bothered by the variety of reactions, stating: 'If euro 2012 is supposed to bring benefits to the entire country, why should the church be denied of its share?'

Is the stereotypically devotional religious character of the Poles really forced to manifest itself in its football stadiums? Maybe this bizarre campaign is simply caused by a drop in the number of those wishing to become priests one day. According to Polish sociologists and authors of social diagnosis 2011 ('Diagnozy Społecznej 2011'), a study concerning the Polish quality of life, the number of adult Poles regularly participating in religious celebrations is gradually falling each year. In 2011 they constituted 42.7%, reflecting an almost 8% drop in comparison to the previous decade. Even though this trend is taking on much slower turns than in Spain or Ireland, everything leads to the fact that the stereotypically 'religious' Poland is bound to secularise itself.