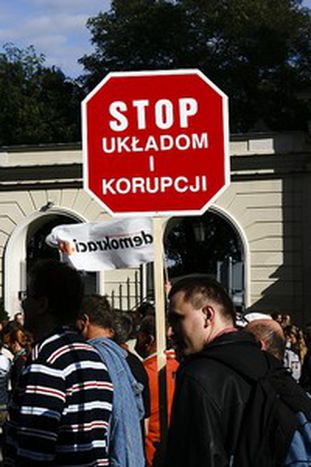 Poland's nationalist leaders have had enough

We had quite a summer this year - Croatia on fire, Anglia under water, Bulgaria and Romania praying for a cold breeze, whilst in Poland, a storm in the way of early elections

August 9 was an extraordinary day for the IV Republic. Donald Tusk, leader of opposition party Civic Platform (PO) requested a meeting with president Lech Kaczyski, twin brother of prime minister Jarosaw, of the nationalistic Law and Justice party (PiS). After talking for the first time in a while, for about four hours, the two politicians agreed that early elections are a must.

The moral revolution, announced by the exotic coalition led by PiS and supported by radical, populist ‘appetiser' parties like the League of Polish Families (LPR) and leftist rural Self-Defence (Samoobrona), has failed. On the political arena, where blows below the belt have become the norm, all members of the coalition dig up dirt on one another, dig out embarassing recordings of their opponents and rummage through the closets where their adversaries have hidden skeletons. What will the new hand mean for Europe? Most likely a new, better quality of relations between Poland and the EU. But will it be possible to adopt laws necessary to begin preparations for Euro 2012, before Sejm (the Polish parliament) dissolves itself?

In one interview, Tusk said that ‘early elections in October will give the Poles a feeling of relief.’ And the rest is much needed. From mid-July, Poland has been troubled by heavy political turbulences. Ominous clouds gathered above the heads of the politicians when prime minister Jarosaw Kaczyski demissioned Andrzej Lepper, chairman of the Self-Defence party – until then a member of the coalition, vice-prime minister and Minister of Agriculture, under corruption allegations. An operation of the Central Anti-corruption Agency (CBA), by some called a groundless provocation, tempting some to become involved in a crime, was prepared to show that Lepper was corrupt. It did not reach its objective, because someone warned Lepper. The real thundersorm in politics began when the hunt for the source of this leak began.

Who is a traitor, who is a liar?

Minister of Justice Zbigniew Ziobro (PiS) claims that it was Janusz Kaczmarek, sacked a few days ago because of similar suspicions from the position of Minister of Internal Affairs and Administration. Kaczmarek, abroad on vacation, denies the claims. In his defence, he talks about issues, which if they can be proven would discredit minister Ziobro. For now, however, the quantity, calibre and timing of his accusations put his own credibility in question. Lepper, nonetheless, says that he was informed about the CBA provocation by none other than… Ziobro, the Minister of Justice. Ziobro rejects such accusations and claims to have an ace in his pocket – ‘an objective proof’ which can show ‘who is the liar, who is the traitor.’

At the same time prime minister Kaczyski wants to remove all ministers who belong to the two parties that were until now the members of the ruling coalition. Even the Poles themselves do not understand much of what is going on. One thing is clear - we have an unheard of turmoil. The coalition which now exists is plunged into deep chaos on paper. Early elections are needed. Even on 19 July, when the situation had not yet reached its peak, 61% of respondents spoke in favour of early election, according to the poll by public opinion institute TNS OBOB.

Chance for a change?

Even though the majority of Poles want early elections, they are disillusioned as to how much change it could potentially bring. Both PO and PiS are right-wing parties – before the elections of 2005 the similarities of both parties‘ political agendas were evident. The polls show that neither party will be able to gather support allowing her to govern alone. However, an undoubtful advantage of early elections would be the verification of elected members of the Polish parliament. The ones who were most disgraced in recent scandals would remain outside of the parliament. The same thing could happen to the so called ‘appetiser’ parties – the radical, populist and anti-European LPS and Self-Defence, which would increase the quality of Poland’s European policy.

There is an important problem linked to early elections, however. Many important legislations, linked among others with the preparations for Euro 2012 and the admission of Poland to the Schengen zone, wait to be prepared and voted on in the lower chamber of the Polish parliament, Sejm. This problem was mentioned in the president’s consultation with the leader of Civic Platform, Tusk. The coming days will show, whether a will exists to get that legislation work done before the dissolvement of Sejm.