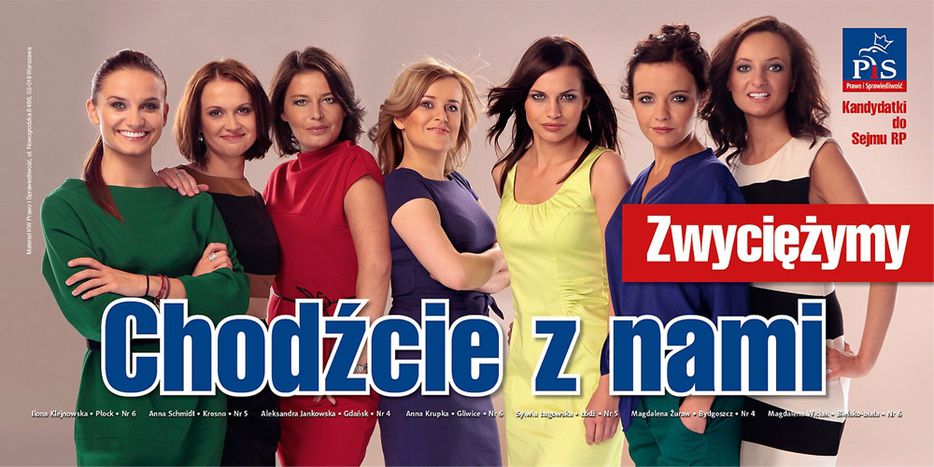 Polish opposition leader Jaroslaw Kaczynski was seen as a no-hoper for the upcoming parliamentary elections on 9 October. Yet an unexpected comeback in opinion polls could be down to the conservative law and justice party’s new election campaign, in which seven attractive young women – one standing for Lodz, in particular - give the party a facelift

The current prime minister Donald Tusk looks sceptical. ‘Any outcome is possible now: either the PO or the PiS could win,’ the liberalgovernment head laments when he is asked to comment on the latest opinion poll. If elections were to be held now, 33.1% of voters would vote for the ruling civic platform (‘Platforma Obywatelska’ or PO) and 28.1% would opt for Kaczynski’s national conservative PiS (Prawo i Sprawiedliwość), or the law and justice party.

While up until now surveys had seen Tusk as miles ahead of the competition, the Polish institute Homo Homoni has come up with a quite different result. An August survey by the centre for public opinion research (CBOS) had put Tusk ahead of Kaczysnki with 36% of the vote to the opposition leader’s 20%. The nationalist catholic Jaroslaw Kaczynski is generally portrayed as a candidate lacking solutions to the problems of today, an anti-European who doesn’t need to be taken seriously. He was thought to be traumatised after the 2010 plane crash which killed his twin brother, making him hardly even capable of leading election campaigns. On top of this, not long ago he threw various important people out of the party who had led the 2010 presidential election campaign for him. The opposition was seen as weakened from the word go.

Experts believe the reason for the comeback of the PiS is its new election campaign which lends the party a fresh image. In the past weeks, seven attractive women, all candidates in different constituencies, have been purposefully brought into play. ‘We wanted to break with this old stereotype that only aging functionaries assemble around Jaroslaw Kaczynski,’ explains candidate Sylwia Lugowska. The 23-year-old is running in Lodz, a town in central Poland, and has swiftly moved up through the party ranks. She joined PiS at the age of 19 and already acts as party spokesperson in Lodz’s regional government. The teacher is the sweetheart of the Polish media. She is known as the ‘Angelina Jolie of the PiS’ because of her Lara Croft looks, while the country’s largest online portal Onet has called her the ‘most beautiful part of PiS’.

She made her first high-profile appearance at the party conference at the end of June, when the tender eyes of the party patriarch gazed at the young girl for the entire time. The picture simultaneously astonished and delighted the Polish press. Until then Kaczynski, 62, who still lives with his mother, hadn’t exactly been associated with young women – and he remains unmarried. The fact that he doesn’t have a wife is highly unusual for a Polish man of his generation.

However, this just one part of the election campaign which is meant to particularly appeal to young voters. ‘As cool and jazzy as PiS’ runs the slogan for the new tactic. The most recent surveys show that the change of strategy has indeed worked: PiS really has significantly gained support among the target group aged 18 to 24. It has even overtaken the PO. According to a questionnaire by the market research institute Millward Brown SMG/KRC, mid-September saw 29% of young people supporting Kaczynski, with just 27% wanting to see Tusk as prime minister.

'Young and first-time voters could be decisive'

With voter turnout in Poland traditionally low and hardly predictable, young and first-time voters really could be decisive. Additionally, the political situation in Poland isn’t very stable. There aren’t exact forecasts the way there are in Germany for example. According to independent image and strategy consultant Sergiusz Trzeciak, undecided voters make up ten to thirty percent of the electorate. ‘This often includes young people who do particularly respond to the candidacy of such attractive women,’ comments the specialist. ‘We can’t rule out the scenario that PiS win a few more percentage points and these could be decisive for the final result.’ 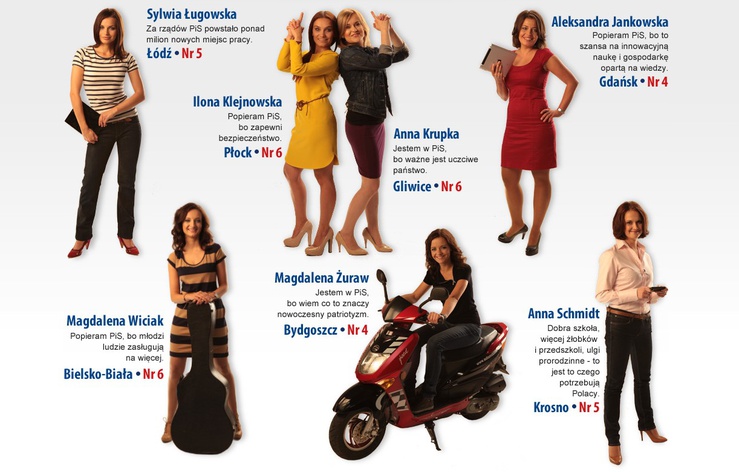 Meanwhile, specialists have also started to analyse the party’s new tactic. Psychologist Zofia Milska-Wrzosinska interprets Kaczynski’s campaign as declaring, ‘I’m the group leader, the alpha male, because I possess beautiful and young women. The girls gather around me; through me you can also gain access to them.’ Similar methods of achieving the image of a leader can also be found in the world of show-business, she says. ‘For example with Playboy publisher, Hugh Hefner.’