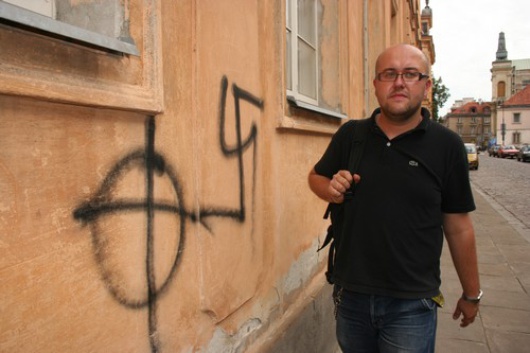 ‘Look! Someone has painted the anchor, the symbol of Polish patriotism, next to a swastika. What is particularly alarming about this is that, for many Poles, it is not a sign of protest in the slightest,’ says Jacek Purski, whilst pointing towards a house wall covered in fascist symbols. He is en-route to Warsaw’s old town in order to see where these new scribblings are occurring. Purski works for the group 'Never Again' (Nigdy Wicej). His boss Marcin Kornak controls the initiative from Bydgoszcz, a city south of Danzig. He is a lyricist for many prominent rock groups in Poland. Yet for fear of attacks from right-wing extremists, he cannot give interviews in person. He is only contactable via telephone.

'Never Again' has a support network in many Polish cities, with 100 volunteers employed by the group. They meet with journalists in public places only. Jacek Purski’s favourite local bar is in the Buffo Theatre. It is here that he feels safe. 'Never Again' has not had an official office since it was established.

Jacek Purski reacts calmly when slogans comprising of we will do to you what Hitler did to the Jews or the final solution is near are written. Even threatening letters are thrown straight into the bin. Yet there are some things which unnerve him. His name, photograph and mobile phone number exist on the internet on the so-called ‘list of enemies to our race,’ along with other Polish anti-fascists, immigrants, homosexuals and foreigners. The website stems from the Polish offshoot of the international neo-Nazi organisation ‘Blood and Honour.’

For sociologists, the meaning of right extremism is somewhat of a mystery. Rafal Pankowski, an expert on extremism at the Collegium Civitas in Warsaw, suggests that it is evidence of the schizophrenia of those affected: Polish fascism carries the symbol of hostility and thus leads people into absurdity.

‘God, Honour and the Fatherland’

Jacek Purski is pensive when he thinks of the founder of the National Revival of Poland (Narodowe Odrodzenie Polski) of Poland. Adam Gmurczyk, like Jacek Purski, has grown up in Warsaw’s working-class neighbourhood of Wola. Their fathers have both campaigned against communism in the ‘Solidarnosc’ movement. Yet it is here where the similarities end.

Shortly after the changes in 1989 Adam Gmurczyk was allowed to register with the former anti-communist party, the Narodowe Odrodzenie Polski (NOP). ‘Democracy means the power of the masses or certain interest groups who only have their own interests at heart rather than the interests of the people as a whole,’ says Gmurczyk. For him, it is not unusual that there are also radical members, known as skinheads, within the party, ‘ Now and then everyone gets the urge to cover for someone.’ In the party’s propaganda leaflet, The Sword, internationally-known neo-fascists, such as Roberto Fiore and David Irving, are also published. The NOP maintains close connections with Great Britain and the NPD of Germany.

‘In the nineties the right-wing extremist groups were able to upgrade their infrastructure almost unhindered,’ says Marcin Kornak of 'Never Again'. The association’s campaign for a ban on fascist and racist organisations lasted for many months. 'Never Again' counts Article 31 of the Polish constitution amongst their biggest successes: since 1997 this has forbidden Polish parties and other political organisations to propagate fascism, racism or communism. ‘However the laws were not altered in a logical way,’ says Purski. ‘Right wing extremists could therefore succeed in the highest state positions.’

'Never Again' relies on its own research. In the so-called ‘Brown Book,’ the activists record incidences of right-wing extremism, which are then sent regularly to the Polish media in the form of newletters. The association arranges conferences and provides photos for the journalists. 'Never Again's register controls two right-wing extremist parties - the NOP and the League of Polish Families or Liga Polskich Rodzin, with their main hotbed of talent being the ‘Polish Youth.’ NOP functionaries are on the committee in many city and town councils. More often than not they bill themselves officially as impartial. Until quite recently Liga Polskich Rodzin was partner in the Kaczynski coalition government. 'Never Again' has so far published 400 articles about both parties and other organisations in the Polish media.

Changes in incumbency in Poland

Jacek Purski is in his car en-route to see a friend. 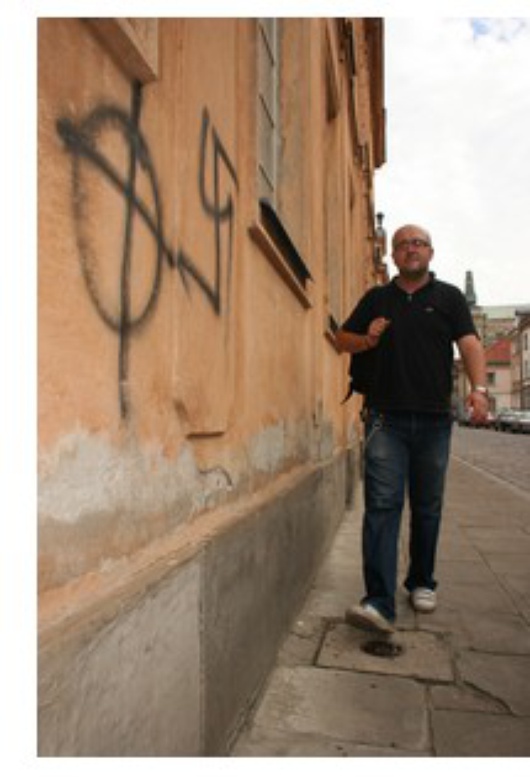 Rush-hour traffic causes gridlock on the Aleja Jerozolimska roundabout. ‘This roundabout in the heart of the city was renamed by the Kaczynski government after Roman Dmowski, an anti-Semitic nationalist leader from the post-war period. As a Pole, one can only be ashamed about this,’ rants Purski. He is glad about the changes in government. Liga Polskich Rodzin is no longer represented in the new Polish parliament. ‘One has to pick up the pieces that were left behind by the wave of right-ring extremism,’ according to Marcin Kornak.

Perhaps 'Never Again' will initiate a renaming of the ‘Dmowski Place.’ For Jacek Purski, it is of no importance as to which name it should bear. If it was someone who stands for polish integration into Europe, then it could live with it. Although for him, an anti-fascist would be preferable.