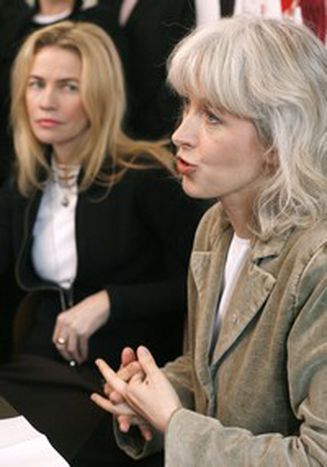 'Poland belongs to its women'

There's a lot of hefty debate going on in Poland right now about women's rights. In January, conservative and nationalist politicians in the anti-abortion camp proposed a new 'right of life from the moment of conception' clause in the constitution. They also wanted to financially support housewives.

The proposals met with criticism from the public. 'If you want to talk about women's rights, talk to women first,' complained Izabela Jaruga-Nowacka. The Democratic Left Alliance (SLD) MP is known for her vehement support of women's rights.

It's more than enough ground for reason to form a Women's Party. 'We shouldn't just always resist,' says Manuela Gretkowska, 43, novelist and founder of the Partia Kobiet.'We live in a democracy. We can demand our rights according to the principles of a democratic country. I strongly believe that we will succeed. There will finally be a party in parliament which will look after the interests of Polish women.'

Unlike other European countries, there's no real legal equality between genders in Poland. But women hold higher positions in the work world, be it in politics or economy.

'The women who are presently in parliament don't represent our interests well enough,' complains Gretkowska. 'We confuse ourselves by setting out on ideological paths. We don't manage to address those issues which affect us all. Above all, we don't protect those who are most defenceless in our society – our children.'

In Poland, women having a career is viewed as an abnormal phenomenon. Whoever finds success in their career is automatically branded a radical feminist, or disregarded as someone who doesn't have a family to take care of. 'I find that women are less and less assertive and self-confident,'says Magda, leader of a citizen's rights organisation, SLLGO. 'Even when women work in public office, they are constantly told that their priority should be taking care of the household.'

'Poland belongs to its women'

According to the Women's Party rules, men have to remain a minority. The concept of creating this type of party was ridiculed not only by male colleagues on the political floor, but also by women from other governmental parties.

But many well-known politicians from the opposition, businesswomen, journalists and prominent Polish women support the project. Above all however, there is support from a vast number of 'normal' women, who want to express their dissatisfaction with current politics.

'All those who have doubted us and ridiculed us as mere 'political folklore' need to know that women can organise themselves in a new political party and work with a new political concept,' according to Lidia Popiel-Linda, co-founder of the Women's Party.

The Women's Party came into being with Gretkowska's manifesto, 'Poland is a woman' (Polska jest kobiet). The party programme doesn't only intend to reach those nation-wide who want to see an improvement in their living standards. It also wants to bring change to all those areas of life where every Joe Blog is unsatisfied.

A means to an end?

It's the very aim of the Women's Party's - to improve the situation in the entire country - that rouses the most criticism. 'It's impossible to upend the country in all it's areas and thus to implement its ideals. The party really believes it can rid Poland of all its serious problems,' criticises Teresa Jakubowska, from the left-wing anti-clerical party Racja. 'I don't expect that the Women's Party will bring anything new or dazzling to the political stage.'

Others view the creation of the Women's Party as timely, calling it shrewd publicity for Gretkowska's new book 'Women and Men' (Kobieta i mczyni). Allegedly, it's on its way to becoming a bestseller.

One thing is for sure though. Polish women need a better representation of their interests within government. Time will tell if the Women's Party will fulfill the expectations of their supporters.