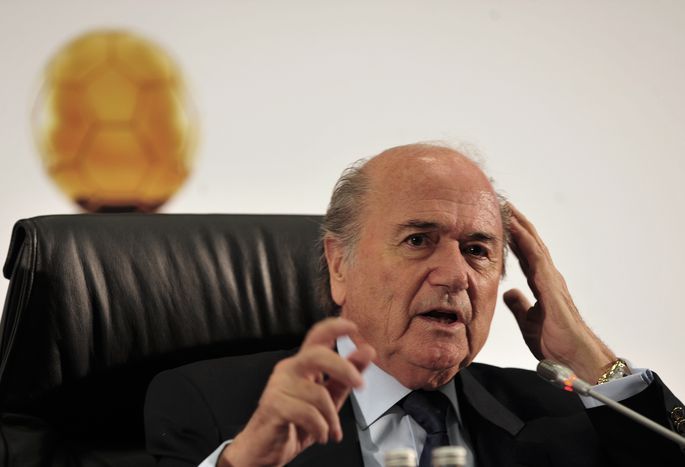 So after 17 years, FIFA President Sepp Blatter is set to resign. Except, nowhere in his 'resignation' letter did he use the word 'resign', as TIME magazine pointed out. Here's a musical reminder of most football fans feel  about this Swiss Machiavelli:

Like most 16-year-olds in the UK, McKenna is currently in the middle of his GCSE exams. What sets McKenna apart is his impressive songwriting. After his FIFA protest song 'Brazil' went viral last year, McKenna's fledgling career has took off. He recently won the Glastonbury Festival's Emerging Talent Competition, meaning he will play on one of the main stages this summer.

This song from 2014 could easily be dedicated to Herr Blatter - it's an attack on corrupt politics. The song starts off with: "I don't even know how you sleep at night / stupid / dishonest / you lie more than when you say the truth",  with the singers saying: "God might forgive you, I won't!"

This satirical video created waves in Spain, representing the political class as a disadvantaged social class affected by the very problems that, in reality, they ought to be solving.

Ok, this one isn't strictly to do with Blatter either, or FIFA or even football itself. And it's probably limiting to describe Sepp and his gang as mere 'Troublemakers", given how they expertly exploited the growth in broadcasting rights for themselves over two decades. However, now the FIFA tower is crumbling, what will the 79-year-old Sepp do in retirement? After all, "The daily fix of kicks won’t do it alone  / It’s hard to stay entertained for long."

At last year's Glastonbury, on at the same time during the World Cup in Brazil, Lily Allen found the time to dedicate her song "Fuck You" to the one and only Sepp Blatter, whom she described as "possibly one of, actually not, the most corrupt, annoyingly corrupt, person there is in the world, Sepp fucking Blatter, you cunt."

Our German Editor Katha takes over for this one: "My Swiss-German colleagues will have to excuse me but I have a hard time understanding Swiss rapper Gimma’s Switzerdütsch in his very recent “Sepp Blatter Song” released on 5th June: The only thing I get pretty much counts as the very essence of the piece: “Mittelfinger an Sepp Blatter – denn das reimt sich auf Motherfucker“ (a middlefinger to Sepp Blatter, because this rhymes on motherfucker).