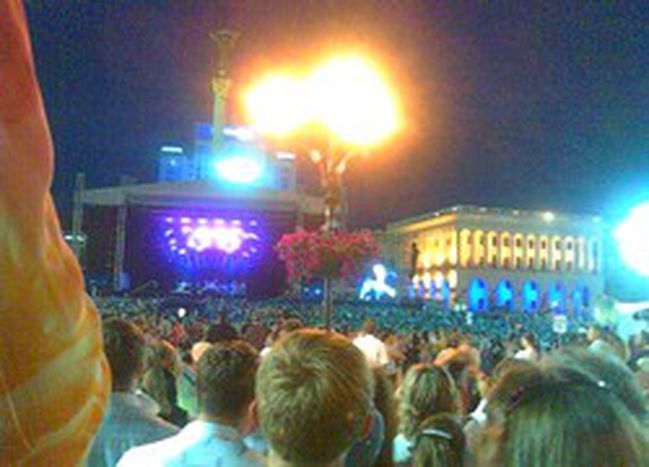 It was English pop star Elton John who managed to unite president Viktor Yushchenko on one stage alongside leaders of the pro-prime minister Yanukovich bloc on 16 June. Over 200, 000 attended in support of a new campaign highlighting AIDS awareness at the capital's Independence Square ('Maidan Nezalezhnosty'), in a country whose epidemic remains the worst-affected in Europe.

The concert was organised by the ANTIAIDS Foundation, a charity founded by Elena Franchuk, daughter of former Ukrainian president Leonid Kuchma (1994-2005), and wife of one of the richest men in the Ukraine, media mogul and parliamentary candidate Viktor Pinchuk. A new five-year campaign has been launched with the Elton John AIDS Foundation, the primary goal being to help children with AIDS.

Those who had perhaps just come along for a free concert on a Saturday night with a world famous star probably hadn't bargained for the reality of the scale of the problem, faced by a Ukraine already distracted by its political contention. Volunteers handed out brochures and contraceptives prior to the concert, highlighting the fact that 50% of all new HIV cases include the 20 - 29 year old cross-section of the population's youth, whilst women account for 42% of newly diagnosed cases in 2004. Meanwhile, several interviews with AIDS-inflicted people plus reports from a children's orphanage for HIV-infected children emblazoned big screens in the square.

'The situation is really devastating right now here in Ukraine,' says Nataliya Voynarovska, one of the managers of the 'International HIV/AIDS Alliance in Ukraine' charity. 'We are among the first nations in Europe where AIDS spread so quickly and on such a scale. We need to speak more about the problem, in order for people to understand that ideas like that doesn’t concern me – I am not a drug addict or gay, are wrong.'

The AntiAids Foundation concert organisers agree. 'We needed to somehow attract attention to this problem amongst a large scale of people,' says Pavel Pimenov, communication co-ordinator. 'So we invited a personality who has tried to solve this kind of problem before.' Right after 9pm on Saturday night, Elton John explained to the public in English why he was in the Ukraine, and reminded its people that 'ignorance, stigma and prejudice are the greatest barriers in this battle. I commit to continue our work in the Ukraine. Together we can make a difference. Thank you Kiev,' - before thanking the public again with the Russian spasibo ('thankyou').

Not going for a song

The singer's presence was billed as a special event for Ukrainians unaccustomed to the pleasures of receiving celebrity royalty - and at a free concert to boot. 'There were a lot of people!' exclaimed Kseniya Yaromenko, a student in the capital. 'I liked the fact that barriers prevented people from entering with alcohol drinks, so there were no boozy people.'

Representatives of the Orthodox Church from both the Moscow and Kiev patriarchy were on hand to support the concert's worthy cause. They encouraged all AIDS prevention organisations to unite and control the scale of the epidemic. 'The church looks on this problem from the spiritual point of view,' explains Dimitriy, archbishop of the Ukrainian Orthodox church. 'Spirituality and religion were destroyed for many years in our nation. The disease spread so quickly, that our youth lack the spiritual guidelines of how to live right. Elton John's efforts help us in the fight against AIDS. It's obvious that the problem can't be solved with the strengths of the government alone.'

But there were, however, small demonstrations from Christian organisations, amongst which the Union of Orthodox Citizens of the Ukraine (UOCU) banged their drums the hardest. 'We think that holding such a massive event with a representative of gay culture is blasphemous!' exclaims Valeriy Kaurov, chairman of the organisation. 'After all, people who have this orientation in most cases are the spreaders of the illness.'

Yaromenko disagrees that this defines the public's opinion. 'I don't have any prejudices against Elton John's orientation – the protests didn't mar the mood on the night. The main thing is that he fights AIDS. All of my friends think the same. What I didn’t like was that he sang too many new songs, and not the oldies which are more famous here.'