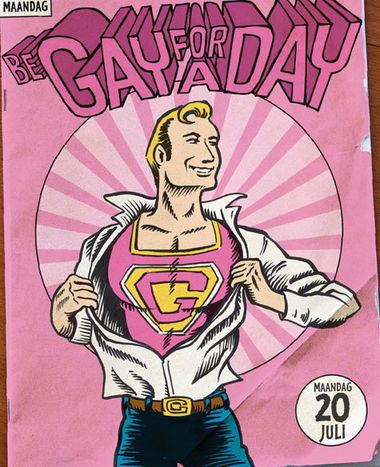 Pink Monday at Tilburg Fun Fair: 'be gay for a day' in Holland

If you were on holiday in the Netherlands between 17 and 26 July you might have seen posters advertising the biggest funfair on earth. But if you look behind Tilburg’s merry-go-rounds, you’ll find pink t-shirts and a Monday especially for gays that cannot be ignored

Tilburg is a 'faceless' town of working class roots in the south of the Netherlands. Avoided by most Dutch, and even blasted by its own residents, the town undergoes a rigorous transformation once a year, as it becomes home to the biggest fairground in Europe. The 2009 edition marked the 200th anniversary and took place between 17 and 26 July, welcoming no less than 237 attractions which took over the entire town centre. Every year, Tilburg’s funfair attracts more than two million visitors who descend on the town from all over the country, some even arriving from abroad. It’s not until you are strolling through the funfair itself that you actually get a feel for the enormity of the event; a three and a half kilometre walk takes you from one end to the other. In the hustle and bustle, it’s difficult to deny that the funfair is open to all; in and amongst the countless fairground rides, stalls, bars and entertainers, are swamps of youngsters, affectionate couples, children with their parents or grandparents. And gay people …

Gay couples on the high street

Obviously, the main attractions feature here; the ring toss, carousels, bumper cars, sweet shops … but in Tilburg, the art of the fairground is somewhat progressive. The streets are lined with fairground rides that cause queasiness just by looking at them; a 26 metre high freefall, a 55 metre high ferris wheel, the biggest in Europe. Amongst the huge roller coasters installed next to the train station, a 4D film and a journey through the insides of a prehistoric monster. However, it’s also progressive in other ways; one of the days, Pink Monday ('Roze Maandag'), is dedicated to gay people. On said day, gay people, dressed in pink, some as transvestites, own the fairground and they party without inhibitions. Gay Monday has been a huge success since its inception in 1990 and is the busiest day of the ten day Tilburg fair. Last year, for the first time, a gay civil ceremony was held on the main street.

This year, according to the slogan Be gay for a day, everyone is invited to join the party by dressing in pink. Pink Monday is not just a party for gay people, it’s for everyone, and provides a unique opportunity for those interested to feel what it is like to be gay for a day.

Has a line been crossed in terms of gay liberation?

As for the gay people that participate, Pink Monday represents an opportunity for them to celebrate their sexuality with the masses. Here, society’s acceptance of homosexuality seems to be complete, and at times borders on encouragement. A good number of Europeans, even Dutch people themselves, wonder whether a line has been crossed in terms of gay liberation. Nevertheless, Tilburg’s fair again proves it’s ability to unite people from all sections of society.