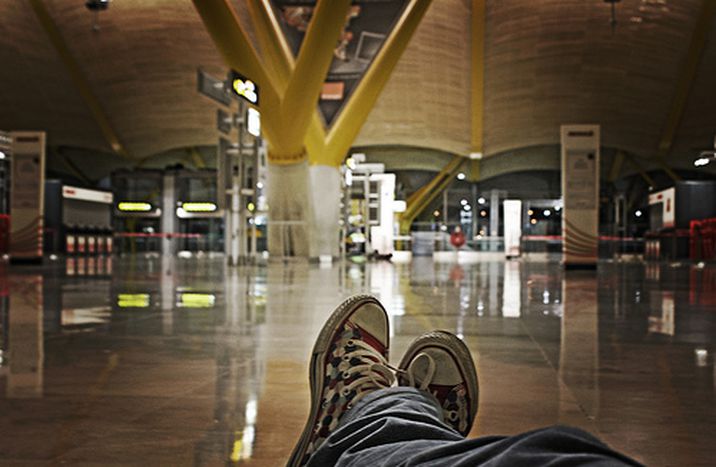 In airports around the world, regular travellers and families in transit sleep on uncomfortable benches as they wait for take-off. Since the arrival of budget airlines and their irregular timetables a website has specialised in giving advice to these squatters

'Greetings from London ! After Paris, I’m off to explore the north of Europe. Amsterdam tomorrow and Berlin after that.' Chinese scribbles on the back of a map show the Sagrada Familia church in Barcelona. Kelly is on a tour of Europe. On the road, the young Asian meets Kate, an American with whom she’s been travelling for the last two weeks. Sleeping in airports has become commonplace for these two young girls.

48km from London, far from the wild fun of underground parties, passengers from all over the world settle down in the airport as they wait to fly out at dawn. London Stansted, dominated by the orange of EasyJet, the blue of Ryanair and the red of Air Berlin, is the stronghold of budget airlines. They’re cheap, that’s for sure. But what do you do when your plane takes off at 6.05 am? 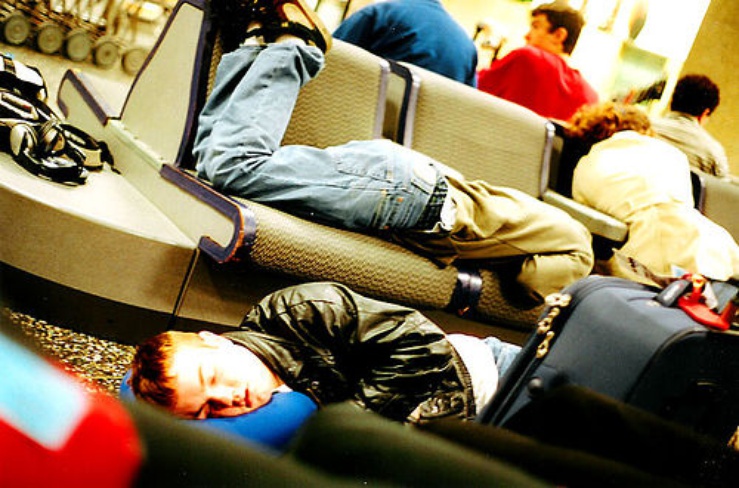 Every night hundreds of people wait here for their early morning departure. 'A real camp of travellers,' as Toby describes it. Heads leaning back on bags, mouths wide open and arms clinging on to their valuables, the only sounds are the coming and going of cleaners. Though some travellers decide to do without sleep. Out in the corners, groups of friends play cards, eat their picnics and chat. 'There’s such a sense of community! Everyone keeps an eye on their neighbour’s bag and makes sure to keep the noise down,' confides an astonished Tanya.

It’s not difficult to spot the regulars, who come armed with earplugs, eye-covers, a blanket and that luxury of luxuries, a floor mat. Sometimes the real experts also put up a tent, to the dumbfounded jealousy of the novices fighting to stretch themselves out between two arm-rests. The unluckiest are the last to arrive. By midnight everyone has already made themselves at home, moving two benches closer together. There are families, there are adults...young people are far from being the only devotees of these 'last minute' nights. 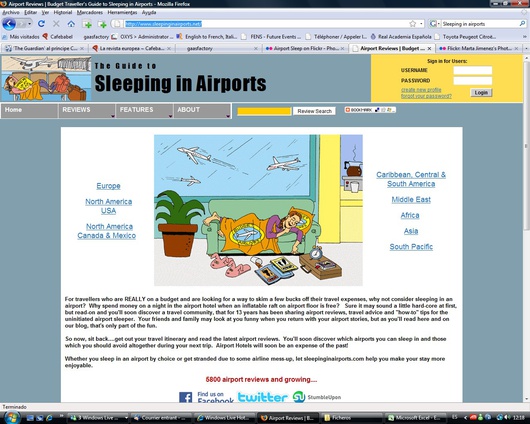 It's not all necessarily 'last minute'. Sleeping In Airports will tell you all you need to know to survive your aerial night. If hotels have stars, airports get their 'golden pillows'. The Netherlands fly in at the top, with Amsterdam winning 2008’s golden pillow for its transit zone. Pros when it comes to comfort, the Dutch have created a special area with beds and showers. However, this comfort is reserved for travellers with official connections between two planes. Passengers wishing to avoid paying for a taxi or a hotel room have to settle for the public waiting area, part of which is closed from midnight until 5am.

Next at the head of the pack are Istanbul and Munich. Amongst the best losers, Paris Beauvais is hated because it’s closed at night, small, far from the capital and has outside toilets. Not far behind is Moscow Sheremetyevo, a dirty smoke-filled 'hellhole'. In certain places, such as Paris-Orly, the authorities may ask you for your ticket validating your presence. Finally, a little friendly ‘pillow’ talk. If you suffer from insomnia, go through as soon as possible into the departures lounge, which is usually more comfortable than the public waiting area. There you can take one last nap before rejoining the clouds.