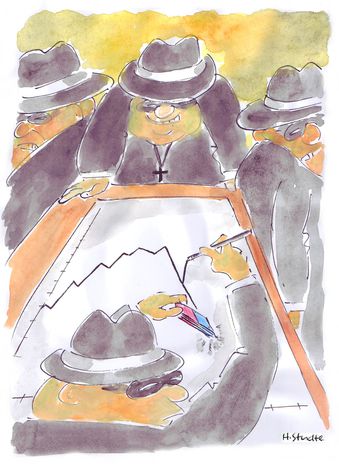 Despite Silvio Berlusconi’s dreams, the next member of the Eurozone is unlikely to be Israel; even Croatia or Turkey have taken a back seat. The current pan-EU squabble is over who should have been admitted to the eurozone in the first place

Call them ‘PIIGS’. It was a tidier acronym when it was first coined back in 1997 to refer to the target offenders Portugal, Italy, Greece and Spain. The acronym now includes Ireland; once held up as an example of the advantages of the joining the Eurozone, now a cautionary tale to those who wish to enter. No longer affluent or on the pig’s back as they say in Irish (ar muin na muice), Europe’s struggling economies are as uncomfortable as pigs in the parlour amid their continental neighbours. EU expansion eastwards seems less likely than ever as the PIIGS problem prompts the question; is it possible to reverse admission to the eurozone?

The euro’s inflexibility is lending the old currencies of Europe a nostalgic glow. In Britain’s The Telegraph, London mayor Boris Johnson breaks into an ode upon discovering a drachma in his sock drawer: ‘This was the history of Greece in the palm of my hand, a symbol of the economic freedom the Greeks gave away for the sake of national prestige. They thought that by merely using the same currency as the Germans they would somehow imbibe Teutonic habits of thrift and fiscal rigour. Thank heavens we stayed out of the euro.’ 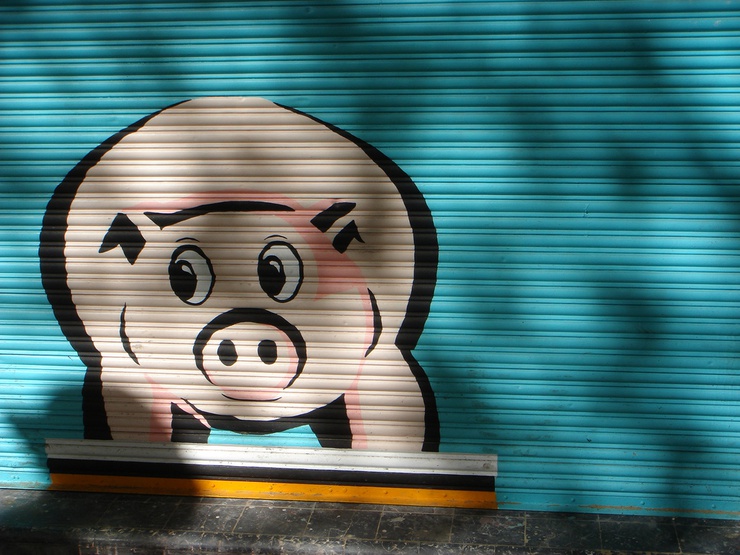 In the days of the deutschmark, Germany didn’t have to worry about threats to monetary stability from poor cousins. It’s the prospect of being taxed to bail out ‘profligate’ PIIGS that adds the greatest bitterness to the family quarrel. The German newspaper Die Frankfurter Allgemeine Zeitung comments: ‘The Greeks go onto the streets to protest against the increase of the -pension age from 61 to 63. Does that mean that the Germans should extend the working age from 67 to 69, so that the Greeks can enjoy their retirement?’ No doubt, it’s a message that’s popular with the electorate. A new compound noun has even been coined in honour of the Greeks’ reputation for cooking the books: statisticsfraudsters.

Read more about the when pigs fly saying in Europe

The media is milking the opportunity for farmyard puns. PIIGS to the slaughter! - Germany’s Der Spiegel wonders if the eurozone can cope with a national bankruptcy. Pigs in muck! - recalling the Palin-Obama ‘pig in lipstick’ fiasco of 2008 and even Paul McCartney’s ex, Lady Mucca, a Financial Times headline provoked the ire of the Portuguese economy minister. Manuel Pinho claimed to be ‘deeply offended’ by the use of the term, but was willing to admit that some pigs that had been flying had now come back down to earth. He might have thought of a Portuguese proverb about unwise borrowing; a pig bought on credit makes a good winter and a hard spring (bacoro fiado, bom inverno, e mao verao).

Back in Ireland, the government is opting for more loans to prop up the economy. The younger generation isn’t happy about this future tax burden. Some are voting with their feet; for the first time in fifteen years, 2009 saw a return to the longstanding Irish tradition of emigration. Unemployment in males under 25 currently stands at 33.3%. Statistics in Spain are comparable. There, the tourism-fuelled construction industry has crashed, resulting in hugely inflated prices without the safety-valve of devaluing the peseta. Though Brussels may rant about irresponsibility, a wise Danish proverb ought to be remembered; the young pig must often suffer for what the old sow did (Ofte kommer Begn efter Solskin, og efter Muln klart Veir).