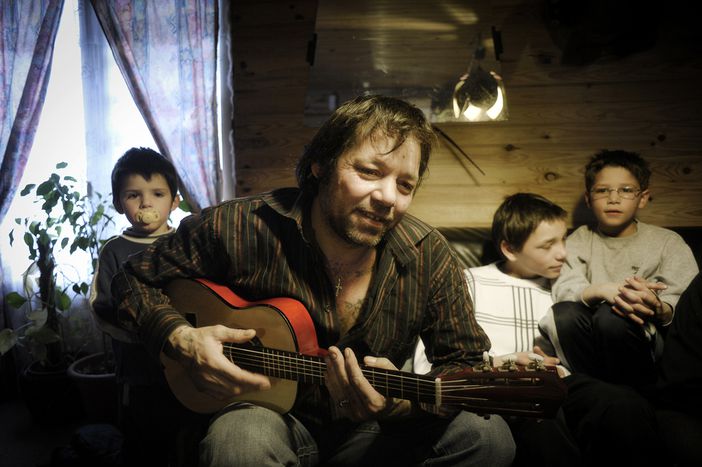 Photos: hanging out with four Roma communities in the French Auvergne

Generalise all you want; Europe's largest minority are comprised of innumerable different groups - the gypsies, the Sinti, the Manouche, the Calés, the Zíngaro, the Yeniche...snapshot from one camp central France

Despite being the largest minority group in the European Union, the segregation of this people, with their ancestral roots and culture, is still prominent on our continent. Thanks to the help of minister Jacques Bonnant Michel, we edge closer to four Roma communities in Auvergne, who still suffer the burden of discrimination.

The family is of French descent and nationality, made up of Rebeca, Dalila and Josueh. They belong to the 'community of French travellers' and live in caravans located in the village of Crouzol. The role of the woman is highly regarded within the community. 'The woman’s work is much harder than that of the man: they run the house, look after the children and go into the city if there is anything to sort out,' declares Josueh.

View gallery (23 images) and listen to the Roma music (live)

Two languages dominate; French and Manouche, and they have gone to school so they know how to read, count - some of them even write. 'Manouche is the language of the travellers,' says Dalila. Despite this, what worries them most is that their children learn to read and communicate well in French, so they are able to find work later in life. They are evangelists and are seem proud to be protected by a religion that gives meaning to their lives. They don’t tend to feel discriminated against, in fact it is the opposite: they admit to liking the lives they lead. Their message to the rest of the Europeans is quite clear: they wish them happiness for 2009.

Mr Benoni lives in a community of caravans made up of people of French, Algerian and Manouche origins. 'What am I to you? A traveller? Because I live in a caravan?' asks Benoni. 'No, I’m French. There are also lots of French tramps who live under cardboard.' He’s aware of the existence of politicians who watch over the Roma communities; nonetheless Benoni believes that in the moments when he sought help, those he approached turned their backs on him.

'There are also lots of French tramps who live under cardboard'

Because of this, religion has stopped being so important, as much for himself as for his family. Benoni confesses to having lost his faith completely.He rejects any thoughts of passing on religious values to his children: 'I don’t want them to believe in anything nor in anyone,' he states. 'So many bad things have happened to us in this life…'

The travellers originate from central Europe, from regions like the Alsace and Lorraine. They are also blacksmiths, and the numerous commercial contacts they have with other European countries, such as Italy or Spain, and even with China, demonstrate the cosmopolitan spirit of this people. They consider themselves to be French, but they cannot hide the German influence in their vocabulary and customs, like the tradition of offering us hot wine. If there is one worry for them, it is the future of the latest generation: 'It’s essential that they fight to get a stable job,' says Frederic Dettinger. In his eyes Europe’s best quality is solidarity.

This tarveller family of nine children have Felix Contreras at the head, and devote themselves to blacksmithing. He spent some time in jail, a period that is recorded by the tattoos that cover his body. Felix considers himself to be Spanish, French, Andalusian, European and above all, gypsy, although he confesses that he has only been in Spain once, and that was last year.

Felix considers himself to be Spanish, French, Andalusian, European and, above all, gypsy

Given his love of the guitar and of partying, Felix hasn’t hesitated a moment in dedicating a good repertoire of songs to us: accompanied by his wife, Maria, as dancer, and by his children Francisco, Noelia, Juanito and Esteban.