Philippe Poutou: "Certainly not a hero"

Philippe Poutou is back. The New Anticapitalist Party member announced his intention to stand in France's 2017 presidential elections. In the 2012 elections Poutou, who's a mechanic by trade, picked up 1.15% of the vote and a positive reputation as a guy who rails against injustice. Today, he's still protesting, but he continues to dream "every day."

cafébabel: The world can be complex. How would you describe to a child what you do?

Philippe Poutou: I'm involved in manufacturing car parts (at the Ford automobile plant in Blanquefort, south-west France, ed.). Unfortunately, my work makes selfish bosses rich, whereas the main objective of the economy should be to meet the needs of the people. My colleagues and I are fighting against this deeply unfair economic system, so that everyone is able to live a decent life and feed themselves, find somewhere to live and take care of themselves. The answer is simple: the people – the oppressed and the exploited – need to take power and implement equal rights for all women and men.

cafébabel: We can all be heroes, just for one day. What have you always dreamed of doing?

Philippe Poutou: Certainly not of being a hero, or even a superhero. There are no supreme saviours. Nonetheless, dreaming and hoping are part of everyday life – dreaming, fully awake, of a great mobilisation of the people, with millions out in the streets, calling for the right to live in dignity and an end to injustice.

cafébabel: For lots of people, Europe can be a pain. How can we make it more appealing?

Philippe Poutou: By proposing a Europe that's the opposite of the one we have now – in other words, a Europe of the people and of their revolt against power, against the theft of bankers and financiers and against a power that's deeply undemocratic. We need a Europe without borders. We need to establish freedom of movement, ensure co-operation of the people, put an end to so-called free and undistorted competition and standardize social rights from the top down.

cafébabel: What outrages you most in the world today?

Phlippe Poutou: What outrages or appals me? The situation of migrants who are escaping war and massacres committed by their dictatorships. Refugees find themselves facing the brutality of European leaders, who build enormous fences to stop them coming in and who condemn them to death by drowning in the sea or suffocating in trucks. 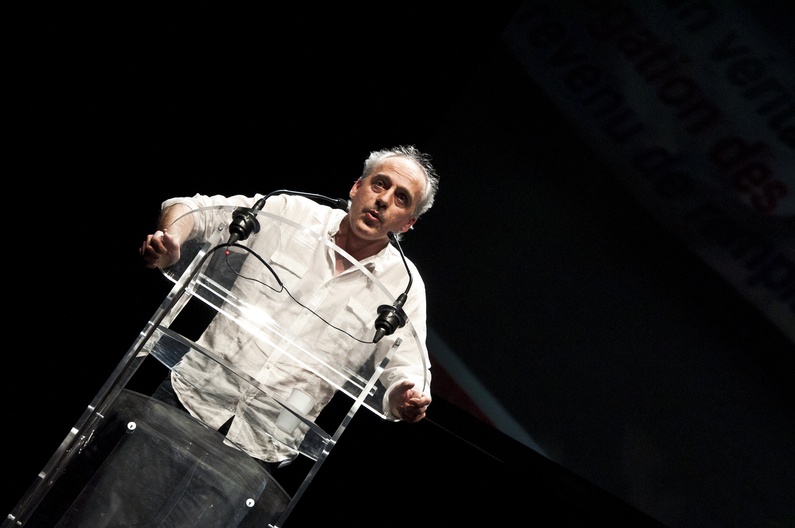 cafébabel: The world seems to accept nothing less than perfection, but what weakness are you most willing to indulge?

Philippe Poutou: I can't see any perfection in this world. On the contrary, cynicism, hypocrisy, individualism, every man for himself, the law of the jungle and indifference about the fate of others seem to be permanently extolled. We're far from perfection.

cafébabel: The internet seems to know everything. Let's test it – tell us something about you that Google doesn't know.

Philippe Poutou: You want me to reveal something private – a secret? That really doesn't appeal. Sorry.

cafébabel: Imagine that one day, you become the representative of all young people across the world. What would be your main message?

Philippe Poutou: I can't imagine that sort of thing or even force myself to. However, if I had to send out a message, it would be: "Rise up against the capitalist world. Above all, don’t relinquish or accept any form of oppression. Fight for equal rights for all women and men."

cafébabel: What's the first thing you always do in the morning?

Philippe Poutou: I get up, as usual.

cafébabel: If you could bring back something that no longer exists, what would it be?

cafébabel: In the style of Martin Schulz, what would you say to a racist?

Philippe Poutou: I'm not sure about Martin Schulz, but racism must be condemned and fought without fail. Racism is not genetic or innate, so we have to combat the society that creates it. Unequal and oppressive social relationships lead to division, prejudice and hatred. For a start, I would say: "Don't mistake who your enemies are. Don't let your anger lead you astray."

There are a fair few Big Fish swimming in European seas, and some of them deserve to put their head above water. With our new series of interviews, cafébabel is fishing deep into the lives of the continent's big names.