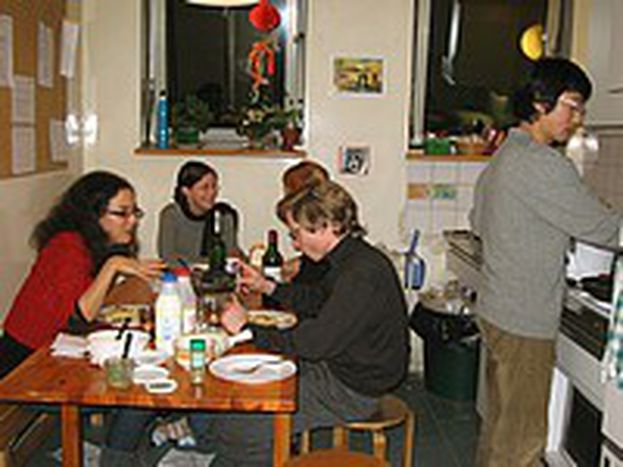 Partying the Erasmus way - over 34 hectares

Endless parties, sprawling sports fields, a huge park and diverse roommates from the four corners of the globe - a room in the Cité University is extremely sought after amongst Erasmus students in Paris

'There’s always something going on here in the kitchen, you’re never on your own.' Katja Böhme is full of nothing but praise for her new home. She’s been living in Heinrich Heine House, the German student residence at the Cité International University in Paris, since September and feels completely ‘at home’ there. The art student from Osnabrück, Germany, is using her Erasmus grant to spend a year in France. 'I actually only applied for an Erasmus place after the deadline for applications had passed. Luckily everything’s worked out. I’m planning on extending my stay by doing an internship over the summer.'

The kitchen on the fourth floor of Heine House is always crammed with people. Vegetables sizzle away in a pan on the stove, the kettle boils. A sign hangs above the sink: 'Do your dishes!' (Faites votre vaisselle!) 'There's really a great atmosphere here,' says Belgian-born Laura Nagels, who is studying at Paris' École de Beaux Arts (School of Fine Arts). The 22-year-old architecture student is one of 17 who share the kitchen. Sounds hefty – but it's part of the experience. 'I’m so happy that I got a place at the Cité,' she explains. “To start with I lived in a shared apartment in Paris – that was unbelievably expensive! It’s only young people here in the Cité, and lots of them are doing an Erasmus exchange like me. It’s so easy to make friends here.'

The Cité Universitaire is in a great location. It spans over 34 hectares on the southern boundary of Paris. 39 student residences are spread out in a large park with lawns, tennis courts and football pitches. 5, 600 young people live in this miniature student city. And it’s not only Europeans with Erasmus grants who live at the Cité – they rub shoulders with students from Brazil, Japan, Tunisia and Mexico amongst others.

The Cité 'thing' is that each residence is allocated to individual countries. It resembles a world fair in miniature format because each nation is responsible for the shape and design of its building. The Japanese have built a pagoda; the Swedish house is similar to the Villa Villekulla, the home made famous in children's book Pippi Longstocking; Denmark is represented by red brick and white window frames, and the Swiss pavilion by the French-Swiss born architect Le Corbusier is regarded as a architectural modern masterpiece. The residents often have to endure guided tours through kitchens and corridors.

Everyday life can be described in one word: 'international'. The quota is that every residence has only half its occupants of the same nationality. The remaining rooms are reserved for the exchange within the Cité. Through this principle of ' mixing' – brassage - young people of different nationalities can live together, whether they come from Germany, Sweden, Italy or Lebanon. However, the selection process for the Cité is strict and places are extremely sought after. The German house alone has six times as many applications as they have beds. On top of that, a candidate must be in their third year of study at least, and be registered with one of the universities in Paris.

Whoever is accepted can live for up to three years in the Cité - a luxury that many international students capitalise on until the very last day. But even if life in the Cité is much more comfortable and cheaper than in an apartment in Paris, everyone speaking to me in the kitchen in Heinrich Heine House today agree on one thing: sometimes, this microcosmos can hold you back from discovering the real Paris.

As soon as the first rays of sunshine appear in the spring, the big field or 'grande pelouse' in the middle of the park is covered with Cité residents day and night. On the big lawn Frisbees are thrown and guitars are strummed, as people picnic and have a read. 'The first thing I was told when I arrived was 'you only need to sit yourself down on the grass and someone will soon come and flirt with you,'' Katja laughs. Call it flirting or otherwise - there is nowhere else in Paris where you can so easily meet people like on the grande pelouse, on the café terrace or in the cafeteria in the main building at the entrance.

If you believe the cliché that the Erasmus exchange is a party year, then you will get your money's worth in the Cité. Along with the traditional party on Wednesday evenings in the Maison Deutsch de la Meurthe, there are also parties every weekend in one of the residences. Even the common rooms have their uses. 'We are always hosting kitchen parties,' Katja lets slip. Her roommate Tobias, who’s at the stove frying fish, adds: 'If the girls decide that they want to party and dance, then we simply grab the laptop, get the music pumping - and the party starts!'

The Spaniard Juan Manuel Domínguez, 28, had a shaky start to his Erasmus year in Bologna:

'I went to Venice to study History, but at the last minute I heard that relations between my university in Madrid and the one in Venice had broken down, and I could only do languages or Arab studies.' So suddenly his destination changed: Bologna. The housing office in the University of Bologna told me I couldn’t rent anything until I arrived.' Then to make his arrival even worse, the airport lost his luggage. 'It was the end of September and classes had already started. I had two options: look for a flat or go to class. So I went for the first. I didn’t even have the money from my grant yet,' which was not much more than 100 Euros a month.