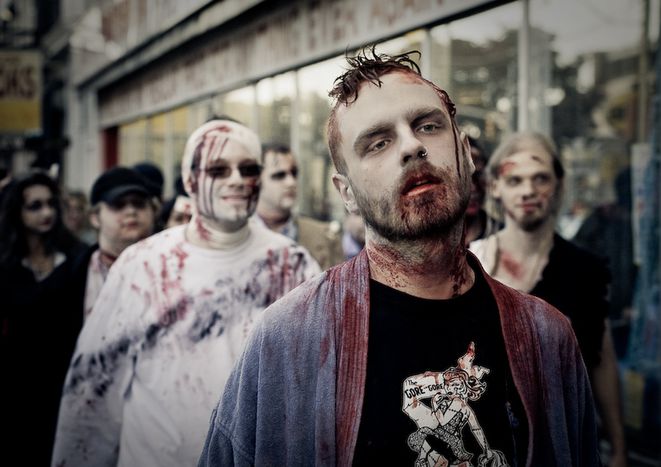 Paris strikes: where clowns once protested, now zombies do

On 16 October zombies took over the nationwide protests for a withdrawal of the French retirement reforms (to be raised from 60 to 62). When even the deceased are coming back to defend their rights, can the French government really afford to turn a deaf ear?

A boy is vomiting litres of blood on the streets of Paris. With a half-burned face and clothes full of dirt and puss he staggers by. ‘Sarko, you’re screwed, the zombies are out on the streets!’ (Sarko, t‘es foutou, les zombies sont dans la rue!) reads his placard, one of many on show on 16 October. Hundreds of other frightening figures pass by. Ahead, a vehicle cranks out rock music from a group dressed as monsters. ‘Not happy!’ (Pas content!) reads one placard, to which another one adds ‘retirement at 600!’(retraite à 600 ans!)

Unlike the American zombie walks that inspired these events, there is nothing apolitical about the third Parisian zombie walk. The first zombie walk took place in Sacramento (California) as part of a horror film festival in 2001, but very quickly numerous zombie walks were organised all over the world in response to the success of so many zombie-themed films. Paris has now seen three years of annual zombie infestations, yet it’s the first time that the walking dead have brought a message destined for the living.

A few streets away in the French capital the same scene plays out with the exception of two small details; the slogans remain intact whilst the blood and the gore have disappeared. ‘Sarko you’re screwed, the youths are out on the streets!’ is the message on the placards of young demonstrators, who are protesting against the reform of the retirement system. Coincidence or not, at the same time as the zombies, the whole of France is in fact forcing a government retraction of the retirement reforms. That includes 25, 000 young people, according to Unef, France’s leading student union.

How to say 'strike' in other languages on cafebabel.com

Why are so many young people joining ‘zombie walks’? Are they fighting for their beliefs? Or simply trying to stay in with the crowd? Who should president Nicolas Sarkozy be scared of? The man who said that the only thing to be feared was the young generation joining today’s social discontent would perhaps do well to tremble in the wake of the living dead on the streets. After all, who are these zombies if not young people masking their fear of the future behind horror film costumes? In previous years French protests have sometimes been enlivened by clowns; for these protesters their weapon was laughter. So while the clowns are morphing into zombies, the Elysée Palace would perhaps do well to watch the old classics again; Resident Evil, Land of the Dead, Zombieland… and to reconsider the reform which is set to put back the retirement age – that is if it doesn’t want to find itself with 600-year-old retirees on its back.