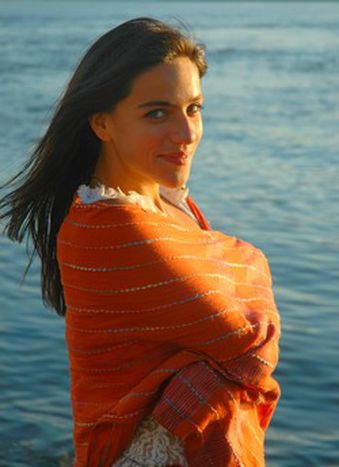 Palya Bea: 'The Balkans are a treasure cove'

From village girl to international Cannes starlet, the 30-year-old inspires with her brand of Hungarian and Bulgarian folk music, drawing reference from jazz and Persian and Hindi sung poems. World music and tradition is firmly back in

Palya Bea's life so far has been described as a fairy tale. A girl from a tiny, secluded village takes over Europe. In 2004, she sang in the international team of the Athens Cultural Olympics. A year later she composed the music for and made a cameo as a cabaret singer in French director Tony Gatlif`s Transylvania (2006), appearing with the Cannes film festival crowd. In 2006 she signed with big names such as Pink Martini and Carla Bruni at French label Naïve. 2007 is full of concert dates and an upcoming debut album. Arranging a meeting with her is nearly impossible amidst her stacked timetable. This year, she was appointed Hungary's Ambassador of Equal Opportunities and has popped up on the cover of a French women's magazine: she is everywhere, it seems.

The girl that turns up at our meeting, however, is easy-going and friendly. In an interview one year ago, she referred to herself as a nomad bird outside society. When asked how the recent media attention has affected her, she says: 'poetry, intimacy in songs, anti-trends, swimming, yoga, water, turning off mobiles, writing: these will never lead to stardom, but these are my batteries, and the result was positive in the end. It is wonderful to see my career as a musician blossom.'

'Mine is a musical and a human art,' she says. 'People look for values and I respond to that need, and in my songs I treat very diverse themes: love, being on the road, being able to say no, being a woman, a child, or a husband...I like it when they listen to my music. Listen. Directed at both ears and hearts, making good music can be a way of serving the masses.'

Invited to perform all around the world, Bea tends to looks at cities as people and friends. 'Paris is a woman,' she says. 'She chatters, wears colourful clothes, sometimes talks too much to hide her depths. Amsterdam is corrupt, but glows in its corruptness. At the same time it is free; while cycling you see ducks in the many canals, rabbits, just like in a small village. Right now, I feel that I am constantly on the move. This safe spot in Budapest is very comfortable, but I keep on going back and forth from there. Basically I am at home everywhere. I feel like I can walk and look around Paris, Brussels, Amsterdam, Sofia or London with the same feeling of comfort.'

As Bea tells her stories, I become overwhelmed with her pulse, her way of life, reminding me of the motto of the EU - unity in diversity. 'Of course, this is what my music is about. I like this kind of cultural diversity. Out of the pieces of different cultures, I create something new within me. And that is unity. I always take two things that make me curious, that lead somewhere. Balkan and Jewish music are two areas in which you can spend a lifetime exploring, there is so much beauty, and so much rhythmic and melodic variation. This also goes for the other elements I use, like gypsy music, Hungarian folk music, or eastern pieces. But, as I have only one life and time is short, I try to be selective and pick only the best out of these materials.'

She is happy about the eastern enlargement of the EU, because, she says, it allows her to travel more freely to meet musicians and discover more music. 'The Balkans are a treasure cove, but you have to be careful with them. I would be sorry to see the values that still remain from the ancient cultures lost. It is essential that Europe, this slightly fat fille de joie doesn't grab the macho men of the Balkans by the scruffs of their necks, like the fat woman grabbing youngsters in Fellini`s Amarcord (1973). She must rather seduce and be seduced softly, for the sake of real fusional love.'

Translated from Hungarian by Dániel Beke