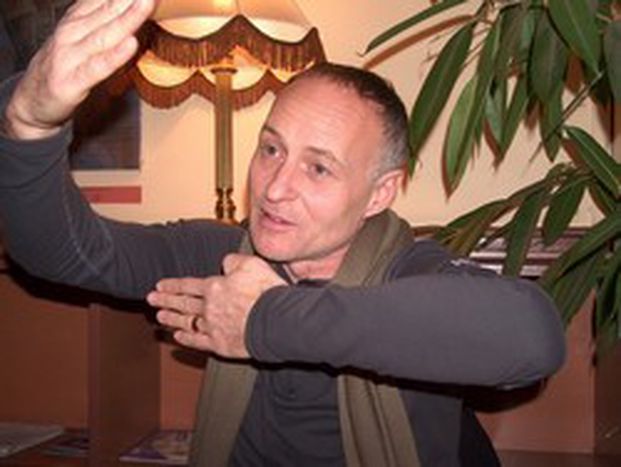 As he travels incessantly between Budapest and Paris, 49 year-old Hungarian choreographer, Pal Frenak, talks about his sensual yet violent creations as well as the tormented world of contemporary dance.

"There is no great nor small artist, there are only artists", Pal Frenak tells us. He arrives wrapped up in a black scarf at the Odeon Cafe - the arty hangout of the Hungarian capital- on a freezing January day. In a shrewd and easygoing manner, he starts talking about his life and works, or rather 'attempts' as he calls them.

"I often hear that my plays are crude because of the very personal way I represent sensuality. But to me nudity means transparency, a naked man making use of his personal worth." Pal Frenak is known for his anti-conformist and sometimes daring creations represented in numerous European theatres, in the manner of 'Tricks and Tracks' in 1999, or 'Banquet', in which nudity is used as naturally as gender swap. Insurmountable loneliness, torture, violence and the brutality of sex are all omnipresent in his shows and are acted out in particular geometric spaces.

"In each one of my shows, I act according to my own convictions and if I want to demonstrate something, I will bear the consequences", points out my interlocutor. His plays often find themselves on the edge, halfway between reality and imagination, where one finally confronts oneself. In art, no two representations are the same. The choreographer's task consists of transmitting his emotions to his dancers whilst maintaining a freedom of interpretation within certain themes. "During rehearsals, I analyse their moves attentively. Thus frequently, a particular move is created by chance."

Nothing is set, everything is constantly changing and the dancers often live through tough moments, their minds and bodies naked, in constant turmoil between backstage and everchanging moves. "After the show, it is often hard for my dancers to get back to reality and to confront it", he points out. "But where is reality? I have to admit that I feel much better on stage. The stage is where barriers disappear, where I can float through space, outside of my carnal envelope. To achieve this, I do not need drugs, I simply give myself to an homogeneous existence in which i can dissolve. It is for this reason that success does not eat at me", he adds. "The question is not whether my plays are good or not, whether or not the public likes them. When you are on stage, you have to show what you are, what you communicate to the public. You should not want anything, you should just be."

Back to the past

Frenak tells me about the maturation of his strongly particular style of choregraphy, as his tea cools down on the pedestal table. His parents were deaf-blind and as a consequence the first language he learnt was that of signs, thus instigating in him a great sensibility towards mimics, moves and body language. Following his father's early death, he was sent to a state funded home with his brothers. Once there, he experimented with his first moves in front of the mirror. At 17, after his return to the heart of his family, he began ballet lessons with the master of the time, Endre Jeszenszky. He then studied Magyar folkloric dance as well as modern dance. In the 1980s, he moved to Paris and enthusiastically joined the contemporary art movement. In 1989, he founded his own dance troop, the 'Compagnie Pal Frenak'. It is a Franco-Hungarian company based in Budapest and Paris. "The fact that I'm Hungarian is both very important to me and has no importance. Childhood, communism, sign language have all determined my life and one needs courage to put aside such baggage. Personally I am like weed, I grow everywhere", he adds maliciously.

"Even though my aim is to represent the self and man, it is the audience that creates stories surrounding my work. This shows that my creations can be interpreted in various ways", he explains. Whether he shocks or scandalises, the main thing is that he touches audiences that react differently from one country to the other. "The Hungarian public does not analyse my work intellectually straight away, but rather lives it physically and psychically. On the other hand, in France, spectators often wish to know the contents of the play beforehand. I have noticed that all occidental art tends to follow this, meaning that it is imbued of prejudice. However, sometimes the problem does not emanate from the public, which makes up all sorts of ideas about the play without having seen it, but rather upstream, from the decision-makers who do not allow the play to be put on", he explains. "The world is not as open as it should be and harbours many men of power who think they can take all the decisions regarding art. This phenomenon seems like new-generation censorship, against which the only way to defend onself is to have a strong conviction."

What to make then of the artist's sense of belonging as he teeters from one city to the other? "I believe in Europe, but I believe even more in humanity. I wish that all the Earth's inhabitants find better ways to link with each other. In my plays, I try to protest against indifference and to contribute to this union in my own way."

Translated from Hungarian by Borbála Balla.