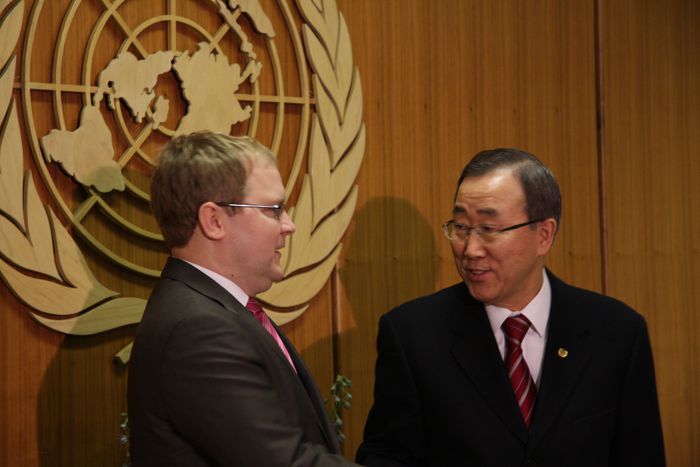 At his meeting with UN Secretary-General Ban Ki-moon in New York on the evening of Monday, 12 January, Foreign Minister Urmas Paet expressed hope that after the approval of the UN Security Council resolution on 8 January it will be possible for Gaza to establish a truce so that civilian deaths will end.

In addition to the situation in Gaza, Paet also discussed developments in Georgia, Afghanistan, Somalia and Congo, as well as Estonia’s activities within the framework of the UN with the UN Secretary-General in New York.

At the meeting, Ban Ki-Moon stated that he was going on a six-day visit to the Middle East, during which he would visit eight nations with the goal of quickly achieving a lasting truce in Gaza. He said that after achieving a truce, it will be essential to focus on building up Gaza and establishing unity among the Palestinians, which would allow the peace process to move forward.

Paet also stated that the primary goals are guaranteeing the safety of civilians and that humanitarian aid has access to Gaza. “Estonia has given a million kroons’ worth of aid for helping to alleviate the humanitarian situation in Gaza through the United Nations Relief and Works Agency for Palestine Refugees. A truce would allow for border crossings to be opened and the peace process to continue,” he said.

The UN Secretary-General affirmed the importance of Estonia’s activities in helping Georgian reforms. Foreign Minister Paet said it is essential for the mandate of the UNOMIG (United Nations Observer Mission in Georgia), which ends in the middle of February, to be extended, because the Georgian security situation still requires the presence of international organisations. “The focus must be on building Georgia up after the war and increasing security, so that the nation could continue to make democratic reforms,” Paet asserted.

The issue of pirates in Somalia was also addressed at the meeting. Paet stated that the UN Security Council’s decision that allows the international community to fight against pirates both in Somali waters and on the mainland is essential for limiting piracy. “Unfortunately, even some Estonian residents have been in the hands of pirates. Combating piracy in co-operation with the European Union and other nations is very important for Estonia,” he emphasised.

Ban Ki-moon stated that resolving Somalia’s domestic political crisis also plays a major role in getting Somali piracy under control, as it would allow for the creation of a unified government.

Ban Ki-moon and Paet both emphasised the UN’s role in supporting civil society and improving the humanitarian situation in Afghanistan. The UN Secretary-General stated that the UN is expanding its activity in Afghanistan little by little, steadily reaching out into more provinces.