Packaging that breaks the mould: the supermarkets avoiding plastic

From Heidelberg, to Berlin and Cologne, small stores and supermarkets that avoid using plastic are popping up across Germany in a growing trend. What do young Germans think about buying all their groceries in these stores? And how environmentally friendly are such supermarkets? cafébabel's Maria Wokurka went to find out.

Sabrina marvels as she enters the supermarket Original Unverpackt in the Kreuzberg neighbourhood of Berlin. She has lived in central Berlin in a shared flat for almost three years now, studying for a Master’s Degree in Sociology and making most of her living through waitressing jobs. For Sabrina, Original Unverpackt is not just around the corner but, she says it’s worth making the trip to it: “I really like the atmosphere in the supermarket. It rather is small and cosy.”

According to Sabrina, one can buy many things but definitely not everything. Original Unverpackt is mainly a vegan store: No meat, no dairy products and no sweets. Products such as wheat, cereals, pasta, tea, couscous and spices can be bottled. Two wine barrels invite customers to bottle their wine too. More than half of the products are packed. Mostly in glassware. Some products are packed in paper – such as vegan condoms. “Most of the products I saw are eco-certified or have the organic label. Furthermore they have regional products, such as honey from Neukölln. I think it is great to have less waste when it comes to plastic. But I really miss things like cheese and yoghurt.” 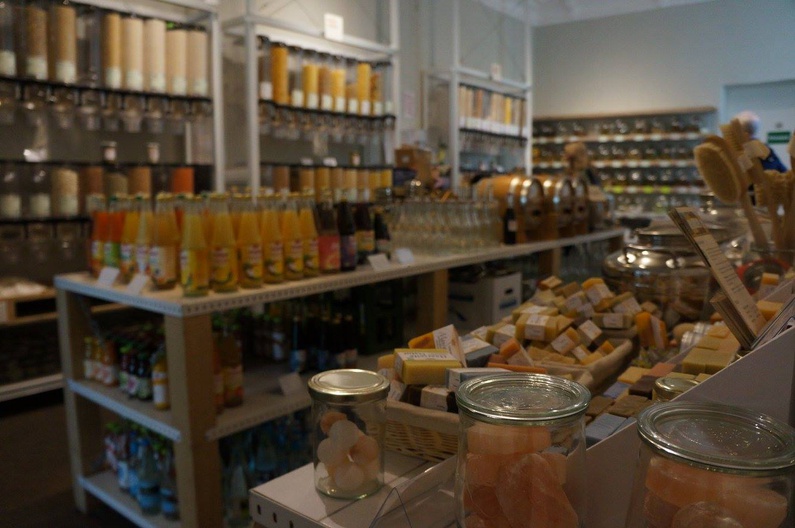 Steve Horn is an investigative reporter on energy, climate and environmental issues in the US and a research fellow at the award-winning online project DeSmogBlog, which researches and exposes campaigns attacking climate change science. According to Horn, supermarkets such as Original Unverpackt are a slow but growing trend in niche markets in developed countries, “We, the US, of course are the largest emitters of carbon on the planet and biggest users of plastics and other petrochemical-produced products. Germany is somewhat of a pioneer, but not a lone ranger. For example, there’s a store like this in Austin, Texas and others in developed countries globally.”

A niche carved out mainly in developed countries

Stores such as Original Unverpackt, for instance, can be found in Austria, Italy and Spain. While all of those supermarkets might have different policies and implementations of what less waste actually means, they still share the same vision: the reduction of plastic usage and food waste. The latter one might happen automatically if more people buy their groceries at such supermarkets.

As the product portions are small and as many products can be bottled, consumers could develop a trend towards buying less, which – hopefully – results in less waste. To be fair, aside from fresh fruits and veggies, most of the products that one can buy at Original Unverpackt have a long expiration date anyways (pasta, nuts, cereals etc.).

Mouna lives just around the corner. She shares a flat in Berlin-Kreuzberg together with two others. The 24-year-old moved to Berlin eight months ago and recently started her Master’s Degree. Through the week, she also works in restaurants and bars. She thinks the idea and intention of these kind of supermarkets is great but is – despite living close to Original Unverpackt – rather undecided. “Dairy products are something I personally miss. As well as bread.” Mouna is a vegetarian but says that, even though she was a vegan, for some products one needs to go to another supermarket anyways: “I did not see any Tofu or Seitan. Maybe it is because products can only be sold in plastic packaging.” 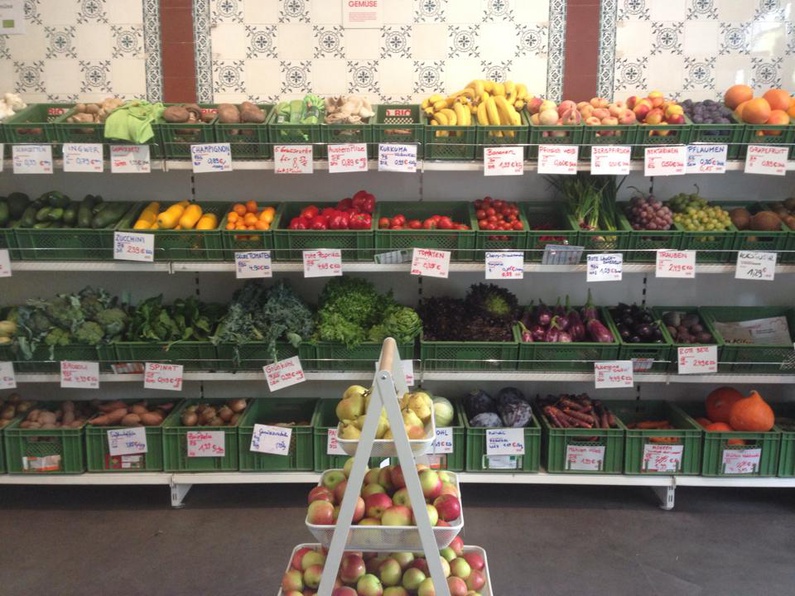 On the other hand, it is hard to believe as many supermarkets sell yoghurt and milk in glassware. Furthermore, Mouna wonders how the products arrive at the supermarket before customers buy them. We asked Original Unverpackt about dairy products and how their products reach the store about four weeks ago, but so far, they haven’t commented.

A hint of an alternative future

Despite some unanswered questions, Horn is convinced that such supermarkets make a lot of sense and can totally function: “This is how most of the world gets its food. From markets without plastic and boxes. Those materials just serve to make the oil, gas and timber industry billions upon billions of dollars in profits annually. It’s how we should all be consuming our food. From small farmers.” Unfortunately, the status quo of consumption and production patterns will remain. In order to change this, the world needs to change the entire logic of the economic system. Still, Horn believes that niche stores do provide a good example of what an alternative future could look like. “However, I hesitate to say it’s revolutionary in that it’s very likely that food sold in these stores still comes from cheap labour and from farms in the Global South.”

Environmentally-speaking, supermarkets such as Original Unverpackt are taking a step in the right direction. Half of the products are packed in glassware. And glass is 100% natural, consisting of sand, soda and limestone: When a glass bottle reaches the end of its life, it is 100% recyclable. What is left after the glass is melted is used to produce glass. Outside of this cycle, glass does not absorb materials harmful to the environment.

A question of money?

In order to make this supermarket concept successful both consumers and suppliers need to be on board. The consumers need to be convinced to spend more time and to invest more effort. On the other hand, the suppliers probably need to find a solution when it comes to certain products the customers could buy somewhere else. Mouna is honest: “I am not sure whether I would go to two or three different supermarkets in order to get everything I need.” Sabrina would buy certain products if the supermarket was closer to her flat: “It is great when it comes to tea and spices, then I like to have just the amount I need.” 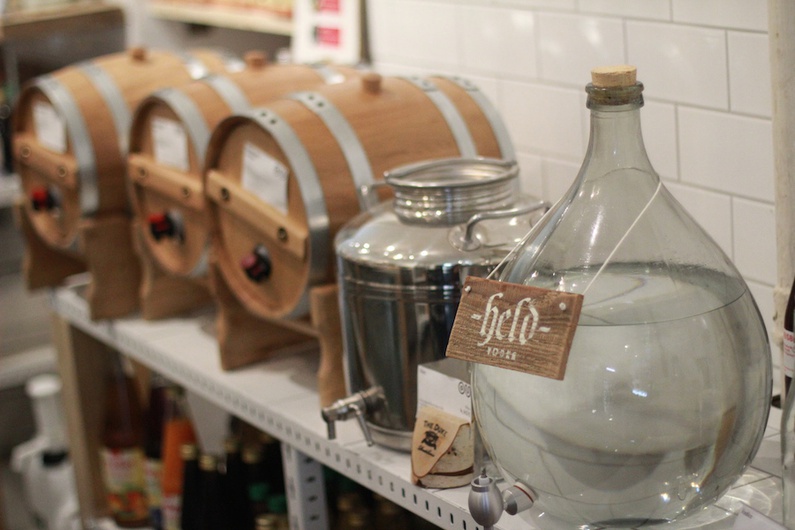 Both Mouna and Sabrina say that prices are similar in both organic stores supermarkets like Original. Money might be a reason for some people not to go to those supermarkets. Many younger people would like to buy only organic and fair trade groceries but they simply cannot afford it.

Horn is adamant about what needs to be changed. Supermarkets without plastic are a start - not more. “The short answer is we need a new economic system driven by the social needs of people and not the needs of endless growth and accumulation of capital.”

So is Original Unverpackt only a drop in the ocean? Yes and no. It depends on if your glass is half-full or half-empty (of quinoa, no doubt). If nobody has the initiative to realise ideas like Original, nothing would change. We may already have greener packaging and vegan condoms but there’s a long way to go yet.

Maria Wokurka is a German freelance journalist focusing on politics, conflict, society and culture. She currently graduated in the international Erasmus Mundus Master's program ‘Journalism, Media and Globalisation’ and works for the German Press Agency. Maria has worked for several national broadcast stations in Germany, such as SPIEGEL TV and branch productions by ARD & ZDF. In August 2014 she was one out of 18 journalists across the world for the yearly ‘Media In Conflict Seminar’ in Israel.