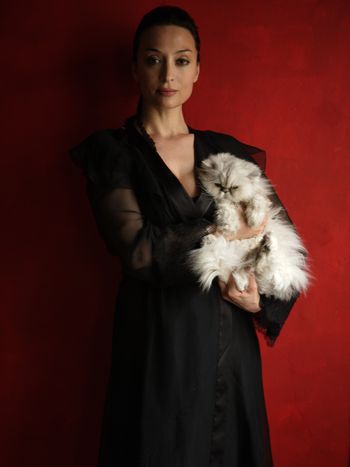 Ornela Vorpsi: me, Albania and the 'whoring of the human race'

BrunchCultureSocietyBalkan eye in the sky

The Italian-writing, Paris-dwelling, prize-winning Albanian writer, painter and photographer, 39, describes beauty as disturbing, discusses her inspirations and is hopeful for Kosovo

I am sitting in a bar in Arts et Métiers, the Chinatown of Paris, a stone’s throw from the deconsecrated church where for centuries Foucault’s pendulum has swung to mark the passage of time. Ornela Vorpsi is late, as is a woman’s prerogative, and, let’s face it, with the added aggravating circumstance of being a writer. She sends me a text: 'I’ll be wearing a black hat,' but her arrival does not go unnoticed: she is disentangling herself from café tables as furtive looks follow her swaying hips.

She apologises for being late, the gym has shattered her, inside and out. She doesn’t look shattered. She orders a tea, expresses some interest in me, and I’m especially interested in her.

Rome and Milan are too provincial

'I’ve lived in Paris for ten years and I never tire of it,' says the current 'artist-in-Berlin' resident of the German Academic Exchange Service. 'I go to Italy for short periods of time, just enough for a holiday. I only came to know Rome and Milan when I was studying in Italy, and their size seemed too provincial to me.' If that is the premise, this should be fun.

And Albania? 'To me it’s the land of my childhood memories, but also a hostile country. I did not escape, if you want to call it that, for economical reasons, but because my family was on the ‘wrong side’, and the Stalinist communism at that time did not give you a choice.' Now an established artist and writer, would she consider returning to her country of origin? 'Never say never. It’s true that Albania is not the same, but God only knows how difficult it is to really change.'

A good question for the Tirana-born writer, painter and photographer. With her five novels and nude female monograph so far, she has already changed something within the Italian language. She loves it with an external glance, dresses it her way, adorns it with the frills of other languages living within her. 'It was difficult for me to change too; Italy was kind of a forced choice for me: it was the nearest country in the west. It was also, of course, the land of culture, of Lucio Battisti and Mina; what’s more I adore the fifteenth century and its paintings – I really wanted to be in the mother country of Paolo Uccello and Beato Angelico.'

Whilst living in Italy, Ornela studied at the Academy of Fine Arts of Brera in Milan. At 28, she released her first book about Albania, Il paese dove non si muore mai ('The Country Where No One Ever Dies', Einaudi, 2005), first published in France in 2004 – maybe because the content would be too strong for the ultra-catholic tricolour peninsula? Could this talk of ‘whoring’, the shadowy term into which any beautiful Albanian woman risks falling, have offended certain, maybe bigoted, sensibilities?

'Oh, I don’t think so. There’s so much shit published every year. The ‘whoring’ I refer to is a universal problem of the human race, because beauty is disturbing.' Yes, but more so in some countries than in others: Ornela’s experience of living with her own beauty might have been a handicap, at least when living in Albania, where communism wanted all people to be the same and where beauty was an element of discontinuity, something to be crushed. The equation ‘beautiful woman equals whore’ served to re-establish this order of things. 'I truly have not had this experience first-hand, I’m really not that beautiful,' she says, lying for the first time during our conversation, 'but my mother is.'

Matthew Barney and Sophie Calle? Don't mean anything to me

Ornela continues to write in Italian, but she thinks and talks in four languages. Is this maybe what languages mean to us in Europe today? 'To me it comes naturally. I continue to speak Albanian to my mother on the phone every day, in Italian to my husband, and French in the street. And I believe that the language in my novels is a synthesis of many cultures, of many mixed languages.'

And so from this synthesis derives a patchwork which communicates to anyone that 'Art needs no explanations. Artists like the American Matthew Barney or Frenchwoman Sophie Calle are widely overrated. They represent the cult of individuality, but say nothing to me. When I look at a painting by Beato Angelico I connect with him even though he’s been dead for centuries. No-one needs to explain anything to me: art is like that.'

And whose pen would you, Ornela, steal for a day? 'I don’t have definite role models, I came into this world with no pretensions. Initially I was attracted to plastic arts, sculpture and painting, but finally I landed with writing. I would have liked to have written A Cloud in Trousers (1915) by Russian playwright Vladimir Majakovskij, The Black Monk (1894) by Anton Chekhov or The Stranger (1942) by Albert Camus.'

It would be impossible not to ask an Albanian what is in store for Kosovo. 'I hope that they achieve independence, the people have suffered so much. But I don’t know how much the concept of nation is still worth in the twenty-first century; it makes sense to me to try to save one’s own origins and cultures, but the only thing that counts is meeting the need for human interaction.'

A couple of minutes later, a shape floats away with quick steps into the Parisian sunset, entering a small road which crosses the boulevard, losing herself in the warmly dressed crowd. Some, fascinated, turn to look.

Italian and French to English translator specialising in veterinary science