Public discourse in France on environmental issues have long become the norm, and environmental advocacy groups have had significant influence.‬ ‪But how they are implemented locally? German journalist‬ Rabea Ottenhues visits three organisations in Lyon that have helped develop sustainable lifestyles in the city. 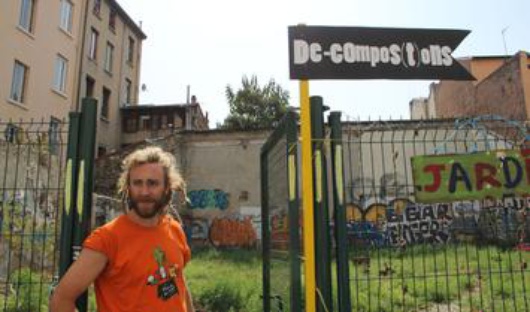 Lyon has its own unique rustic charm, with its many small alleys of the old town centre, and with the hills and the banks of the river Rhône that surround the city.‬ ‪Eco-shops such as Les trois ptits pois (’the three little peas’) and urban gardens like L’atelier des friches are noticeable but blend naturally into the cityscape.‬ ‪Green plots and environmental initiatives can be found in many corners and squares of the city.‬

Céline and Valentin: harvesting what one sows 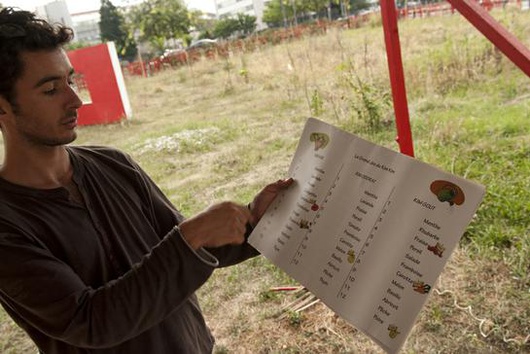 One of these spots is the ‘reservation of the L’atelier des Friches organisation. ‘The ‘friche’ of the organisation’s title is a place where nothing exists.‬ ‪It’s a place that man has left untouched, allowing nature to blossom and grow on its own,’ says Céline, founder of the organisation.‬ ‪The abandoned land was also once the site of a former factory in southern Lyon, in which the organisation’s four leaders have been cultivating a garden since 2010, with the intent of having it be ’another world in the middle of the city’.‬

‪Ten families share the cultivated areas for herbs, vegetables and fruits.‬ The ground, on which until a few years ago a factory stood, is contaminated.‬ ‪Therefore nine raised garden beds have been made available for cultivation. ‪Memberships costs only ten euros a year, allowing members of the collective to harvest what they want; the notion of ownership doesn’t exist on the reservation. ‬ ‪However, regularly contributing and taking an active role in the work is an inherent part of the rules of the collective.‬ ‪’It’s supposed to be an open space, which is why there aren’t fences or gates,’ says Valentin, who has been working for the organisation for the past few months.‬ ‪But this also has its drawbacks.‬ ‪Roughly ten percent of the harvest winds up in strangers’ mouths.‬

‪Valentin prepares the kids’ activities for the next couple of days in the reservation. ‬ ‪It’s not just to entertain the children, but above all, to educate them.‬ It isn’t self-evident knowledge for many children in the city that tomatoes grow on bushes or how many different types of herbs there are.‬ ‪ Valentin is building a device for a trivia game,‬ through which the children learn to distinguish fruits, vegetables and herbs from each other on the basis of appearance, smell and taste.‬ Programmes like these happen twice a month to sensitise children to nature and organic food.‬

The concept of growing your own vegetables defines the organic foods of Les trois ptits pois. and opened the store in .‬ ‪Even from a distance, the green spot on the otherwise fairly drab street in the Lyon suburb of is discernable. ‬‪Sunflowers and other forms of vegetation line the storefront. This is not an ‘organic supermarket’ as are so run-of-the-mill today in most major cities, which can barely be differentiated from conventional supermarkets.‬ Les trois ptits pois is not the only organic grocery in Lyon, but a lot of heart and soul has been invested in it,which you can sense the moment you step foot in the door.‬ 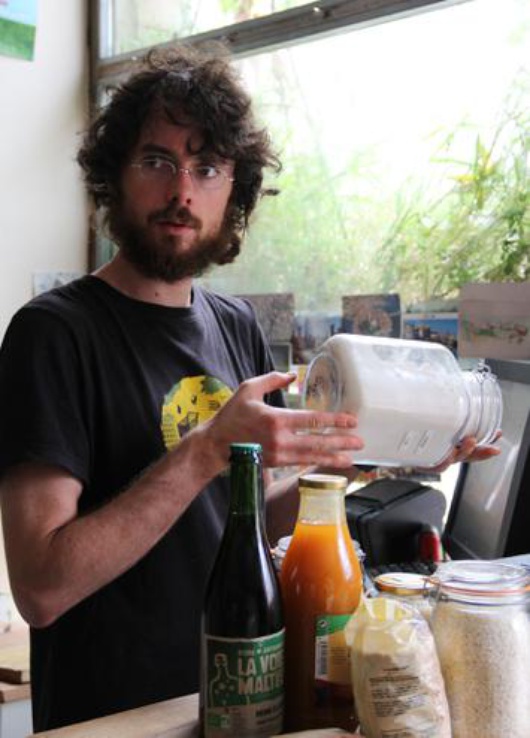 ‪Julien knew the producers and quality of the goods long before the store’s grand opening, since organic foods are the only things he would eat.‬ About 1, 000 products are currently purchasable in the two small rooms of the store, for which Julien and Olivier have developed a system to sort them into one of four categories.‬ ‪It’s important for the shop owners that their products are organic, that they know who the producers are, and that they are produced, if possible, locally, and that the packaging in which they come are environmentally friendly.‬ ‪Unlike many other organic stores, they also make sure they they don’t sell everything in plastic wrapping or cardboard boxes.‬ ‪Flour, sugar and salt come in large sacks, ‪cereal and nuts are kept in large dispensers while oil and vinegar are kept in canisters.‬ Most customers bring their own containers with them, but otherwise, paper bags and recycled glass bottles are available.‬

‪Running their own organic business isn’t enough for the eco-entrepreneurs.‬ ‪They’ve also supported so-called ‘micromagasins’ or ‘small businesses’. This works through, and is an integral part of, the concept of collective purchasing, in which fifteen small groups order goods from les trois ptits pois once a week.‬ ‪They supply goods for the many ‘small businesses’ that are sprawled throughout the city, thereby providing 200 people in Lyon with organic foods.‬ 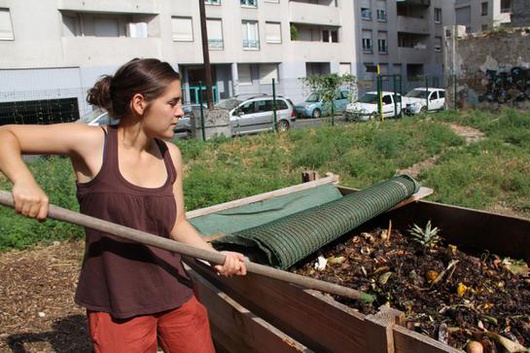 ‪In order to confront the garbage problem in the city, Mathieu and Bastian founded the association Les Compostiers (‘the composters’) in 2009. The idea to build compost heaps for collective use was gleaned from a neighbouring town in which such a project had already existed.‬ ‪As of recently, fifteen communal compost heaps have been made available in Lyon. ‪The first compost heap that they had built is just a few meters away from the composters’ office, in an open space amidst five-story buildings. ‪Until recently there had still been a house standing in the space, but it’s grown rampant with grasses and other plants, while berries grow in one corner and tomatoes and pumpkins grow in another.‬ ‪These themselves weren’t planted; rather, they grew out of the compost that was spread across the ground.

‪Delphine is one of the ten volunteers who works full-time for the ‘composters’. She opens the lid to the compost, allowing a steamy and sweet and sour odour to come her way. ‬ The compost heaps only work through personal management.‬ ‪The composters stand by with help and advice in the planning process and while the compost heap is being built.‬ ’It’s important that they build it with their own hands,’ says Delphine.‬ ‪Community stewardship is, after all, is the primary principle. ’A community can then later develop a communal vegetable garden,’ adds Mathieu, since, after all, the 15, 000 kilos of compost that are produced in a year will need to be put to use.‬ ‪The mutually agreed upon goal in the city of Lyon is as follows: to build eight new compost heaps each year over the next two years.‬ ‪The composters hope that it’ll be even more.‬