By Ádám Terjék Translated by Judit Révész The picture of the opening of the Hungarian-Austrian border in 1989 is living vividly in my memory: in the television news of 10 September 1989 a group of East German tourists exult and rejoice at the announcement of Gyula Horn, 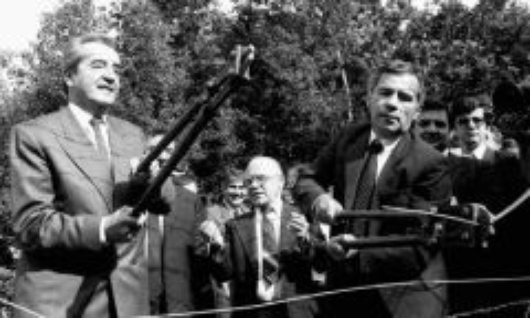 Hungarian foreign minister saying all DDR citizens staying in Hungary could leave to the “west” with their passport. Surpassing all expectations this act of Hungary played a crucial role in the soon destruction of the Berlin Wall, the reunion of Germany and of Europe. As Helmut Kohl, former chancellor of West Germany summarised in a short sentence: It was the Hungarians drawing the first brick out of the wall.

There is no doubt that it was a historic event for both the Germans and the Hungarians. It is also interesting to see that following the sudden weakening of the Soviet Union it was Poland and Hungary that tried to seek their way to independence at first. These two nations proved so many times in their history how much they love freedom and how many things they are ready to do for it.

Earlier in the same year Imre Pozsgay, one of the leaders of the Hungarian communist party stated the truth about the events of 1956. He admitted what the people had always known and felt: it was a revolution, not a counter-revolution. This rehabilitation shook the party’s power in its foundations that was not to be questioned until then. This act of Pozsgay was the ones launching the process of change in Hungary. Decomposing the iron curtain from the western border of Hungary and letting the East German people leave to the “west” were steps of this process that largely contributed to the reunification of the formerly divided Europe. Besides, this humanitarian act towards the citizens of the DDR fostered the improvement of the respect for Hungary – a former COMECON country – regionally and worldwide.

In the second half of the 80s a small group of people recognized that the days of communism are numbered, but for average Hungarian and for the outside world it didn’t seem obvious at all. Unfortunately today there are some, who attempt to make those daring acts unimportant, saying that the collapse of the communist regime had always been a matter of time; so taking the decision of the opening the frontier and making steps towards bringing the communist autocracy to an end didn’t need much courage. They are not right at all! It did need much courage. The fact that Hungarian government of that time managed to make itself independent from the omnipotent communist party and were brave and resolute enough to take the decision about opening borders the proves about much of courage . We shouldn’t forget that the soviet troops were still stationing in Hungary that time and it was a real possibility that the Soviet Union intervenes again even by force, like it did in 1956.

Finally we may put the question to ourselves: who deserves the glory? As Miklós Németh, former prime minister said: letting the East German to cross the frontier was a joint, collective achievement of the people of Hungary.