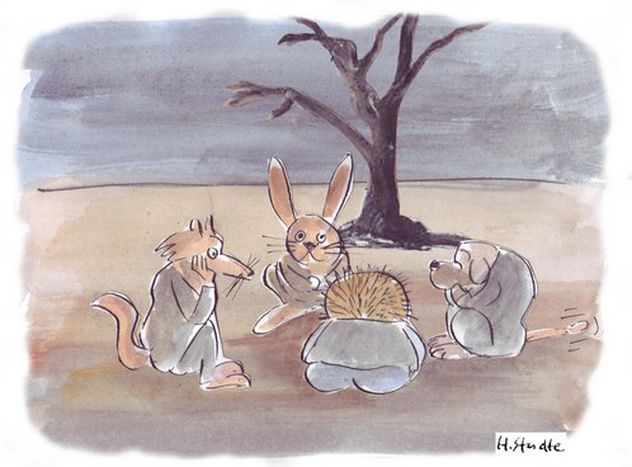 Europeans have funny ways of cursing remote, faraway places. The French curse lost villages by swearing to aller au diable Vauvert (go to the devil). The expression refers to the Castle Vauvert which was built in the Middle Ages in today’s ‘Jardin du Luxembourg’ garden in central Paris, and which was said to have been haunted by the devil.

In the shadow of the creator, Romanians call being ‘far away’ as the devil celebrating (la dracun praznic), whereas Iberians report that you’ll be located in the fifth circle of hell: (estar en el quinto infierno). The Lusophones say that's where Judas lost his boots (onde Juda perdeu as botas, or onde o vento faz a curva (where the wind turns around). The Germans also call the middle of nowhere like going to Buxtehude (nach Buxtehude fahren), a charming town in Lower Saxony.

Monks from the region frightened people by telling stories about the alleged apparitions of the devil. Now urbanised, this far out place had kept its sulphurous reputation for a long time. An observatory was constructed in the fifteenth century; the invisible point of passage of the zero meridian in Greenwich. The English would brand this small place where not much happens as a one-horse town. As luck would have it, he would also act like a vert vallon, a green hill situated in the middle of nowhere.

The Finns describe being from Finland as being from behind God's back or jumalan selän takana. Wikipedia says that this is ‘possibly a calque from the English phrase a godforsaken place, sometimes implying a disrespect of rural communities.’ In German, the latter term is goes from being a place to a nest: ein gottverlassenes Nest. The Germans also denote that the middle of nowhere is where hare and fox say good night (wo sich Fuchs und Hase gute Nacht sagen).

Listen to the expressions