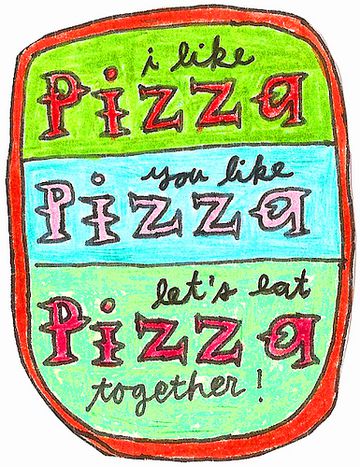 Once upon a pizza

On 4 February, the EU paid homage to Neapolitan pizza by designating its trademark status. Yet when we eat a margherita, does it mean we're also paying homage to the three colours of the Italian flag? Behind this round piece of bread and staple in European diets lies the story of kings, queens and Italy

Regardless of whether you call it flammkuchen (common in the German-speaking nations) or rieska (Finland),  the basic ingredients that are used to prepare them are always the same: flour, water and salt. This flat, white, circular type of bread is a dish which is omnipresent on dining tables all over Europe. It is normally used as a base to be seasoned or stuffed with various foods depending on local culinary traditions; in the Mediterranean region, for example, it becomes a Greek pita or Arabic kebab.

Queen of all pizzas

The Italian pizza also belongs to this family. The origin of the name is still unclear today, though there are two main hypotheses. The first is that the word 'pizza' comes from the Greek 'pita', the word for a flat bread. The second is that the name is derived from the past participle of the Latin verb 'pinsere' ('to flatten'), to reflect the action of flattening the dough when preparing the pizza. 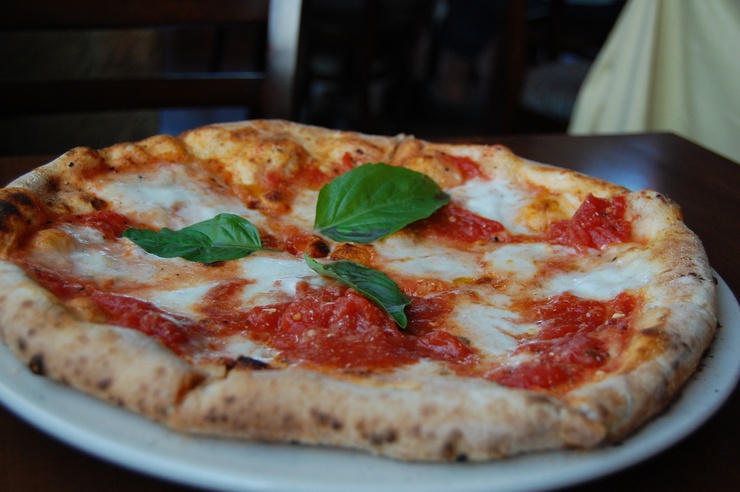 Whilst the etymology of the word 'pizza' might be uncertain, its birthplace certainly isn’t - Naples. Or more precisely, Torre del Greco, a community just by the historical gates of Naples where, in the first century AD, the Saracens introduced locals to the spelt wheat 'pizzas' that they were accustomed to eat during one of their raids on the area. After that, the spelt wheat was replaced by wheat flour. Thus the early pizza was born, a plain bread seasoned with oil and garlic. It was only after the discovery of America that tomatoes were used on the dish: the first ‘red’ pizza was in fact created in the 18th century. The pizza began its long journey in the Middle East and finally returned from the New World to become the product that we know, love and, indeed, eat all over the world.

The first ‘red’ pizza was created in the 18th century

Today there is an infinite number of different types of pizza; all you need is a bit of imagination and a good selection of ingredients to hand. Originally, however, there were only three variants: ‘white’ pizza with oil and garlic, marinara (tomato, oil, garlic and oregano) and margherita (tomato, mozzarella and oil).The culinary merits of the delicious margherita pizza are well-known to and undisputed by all, but perhaps fewer people are familiar with the story behind the dish. In the summer of 1889, Italian king Umberto I and his wife, queen Margherita of Savoy, went on holiday to Naples, staying in the royal palace at Capodimonte. The queen, curious about this dish which was so popular among the Neapolitans, summoned the pizza maker Raffaele Esposito to court, along with his wife Rosa. The couple prepared a pizza with tomato, mozzarella and basil in homage to the three colours of the Italian flag. Chronicles from the period relate that this creation pleased the queen so much that Esposito decided to name it after her, in honour of her: Margherita.

Lunch with Totò and Sofia Loren 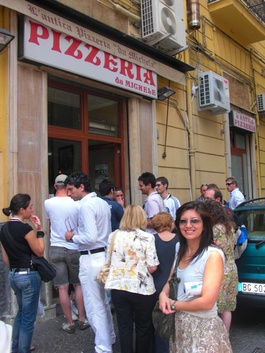 There is a pizzeria where you can still eat pizza as it was made back in the 'good old days'. The Antica Pizzeria da Michele, founded in 1870 by Salvatore Condurro, prepares only two types of pizza: alla marinara (tomato, oil, garlic and oregano) and alla margherita (tomato, mozzarella and oil). All other types of topping are banned, because they go against the ‘mos maiorum’. The restaurant is rustic and Spartan: a marble counter at the back of the room, where the pizza chefs knead the dough and prepare the pizzas, and the wood furnace where they are cooked are the two main furnishings of this restaurant, which could be described by a modern architect as minimalist. The tiles are white, the marble tables are white, and on the walls there are newspaper articles bearing testament to the successes of the place and, of course, a couple of pictures of Sofia Loren and Totò.

You know you have arrived at ‘da Michele’ when you see the queue, even though it is just past midday, outside the door (in fact, this is quite a common occurrence at Neapolitan pizzerias). The original Michele - the son of Salvatore Condurro, after whom the restaurant is named - is standing at the till, dressed in white, never missing a day of work despite his venerable age. After the long queue and once you are at the table you realise that this is no ordinary lunchtime: on one side you have a group of Japanese tourists tucking into a huge pizza, on the other, a group of girls who are giving themselves a delicious break from shopping, and in front of you, a professional in a jacket and tie who is hurrying his lunch so as not to miss the next train home. And so you know you are without a doubt ‘da Michele’. This pizzeria still preserves the simplicity of those first, original pizzas: a popular dish, simple but tasty and quick to eat. Of all fast foods, it is the most traditional and well-loved.