In London preparations for the 2012 Olympic Games are in full swing. And although the mistakes of the previous Games should be avoided, plenty of problems still lurk in the foreground

When John Joyce turns, arm outstretched and pointing to something in the far distance, the walking stick on his rucksack swings dangerously around his body. Joyce, a pensioner in the east London suburb of Newham, voluntarily conducts tours around the future Olympic Park, despite the fact the 2012 games are still a long way off.

‘When we set off, people always think they’re going to see something,’ explains Irish-born Joyce. ‘But the only thing that’s being worked on is the cable they’re laying underground,’ he says, pointing at the high voltage masts from which the cables are hanging heavily. His tour leads past the Olympic Stadium, which is still a field, and past the Olympic car park, where currently only factories are to be seen. Joyce points to a tower block, gleaming red in the autumn sun. ‘Clay’s Lane is over there,’ he calls.

Clay’s Lane is a collection of red brick houses – an enclave on a hill, a former rubbish dump, surrounded by industry, scrap yards and strong smelling fish smokeries. But for 58-year-old Ian Sandison, it is like a final refuge – he was homeless before he joined the community in 2002. But Clay’s Lane has to make way for the Olympics. As community representative, Sandison is in charge of the resettlement. Time is pressing – as of June 2007, all 450 residents have to have disappeared. 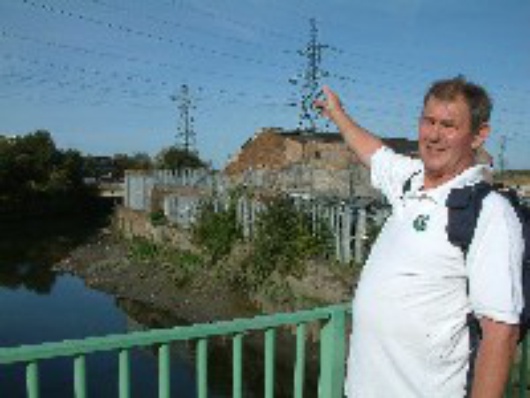 All is not lost though. At the beginning of last year, the London Development Agency (LDA), responsible for acquiring the land needed for the games, offered the community the Docklands as a solution, an area situated directly on the Thames. There are a number of disadvantages to this location, however. The Docklands lie directly on the incoming flight path to London City Airport, says Julian Cheyne, one of the residents. Sandison estimates that rents would double.

To cap it all off, radioactive material – Thorium - has been found on the hill. The find made the Olympics a little more expensive, as the area will have to be cleaned up. At the end of the day, how can a future Olympic Games be held on contaminated ground?

The total cost of the games was originally put at €5.5 billion. Due to a calculation error, the planning committee had to add around €1.5 million to that total - someone had forgotten to add VAT. Predictably, the Olympic Stadium is also consuming more money than planned. Instead of the original sum of €366 million, it will now cost more than €400 million. In short, this costs every Londoner £20 a year, or, to use Mayor Ken Livingstone’s words, a bar of chocolate per person per week for 38 years.

And it’s not only the residents of Clay’s Lane who are resisting the Olympic plans. So-called ‘travellers’, who have been living in camper vans next to Clay’s Lane for around 35 years, now also have to find a new home. Elsewhere, citizens’ action groups are opposing the relocation of basketball courts and the remodelling of parks.

In the meanwhile, John Joyce takes it all in his stride. His Olympics walking tour includes a dirty, debris-filled street. All the factories will be demolished. ‘The warehouses over there too,’ adds Joyce, pointing to a row of low buildings with rounded brown roofs. It’s there, close to Stratford station, that the swimming pools will be built.

Experience is built on mistakes

Stratford will be the gateway to the Olympic world. The slogan, ‘Ask me about the 2012 Games’ is emblazoned on the bright red shirts worn by the volunteers who stand in front of the station. Part of the team at the Olympic Delivery Authority (ODA), which is responsible for the infrastructure at the games, is one John Regis – a former world class sprinter who represented Great Britain in three Olympic Games.

Regis is a media-pro and when called upon flashes a beaming smile. London should also be showing its best face when the eyes of the world are on the city. Regis wants to help – he was at the games in both Sydney and Athens as a young talent manager. ‘We want to learn from all previous games and to filter out the pros for us.Athens taught me that you have to get things done on time.’

For example, the structures created by Spanish star architect Calatrava for the Athens Olympics required vast amounts of steel. The water sports centre was left open air, because the glass roof wasn’t finished in time - that kind of thing shouldn’t happen in London. The magic formula is ‘2-4-1’ – two years of planning, from 2005 to 2007, followed by a four year construction phase. In 2011 all the facilities will then get a test drive. 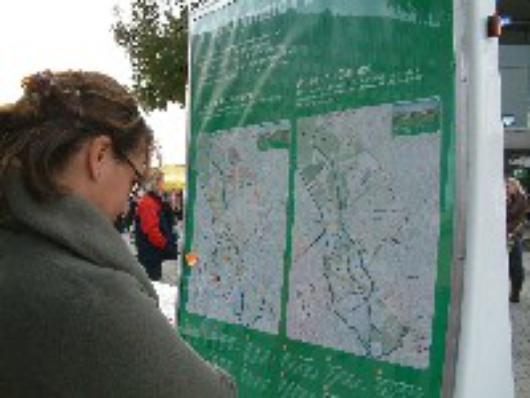 And another lesson can be learnt from Athens: the facilities there haven’t been opened up to tourists, and are now gradually decaying. In London plans are being made for the aftermath of the Olympics, as at Barcelona 1992. The improvements to the infrastructure and leisure opportunities as a result of the Barcelona games were hailed as a success. The ODA wants to match the Spanish by including east Londoners in the planning process.

However, one local journalist – who does not wish to be named – fears that the residents will hardly profit at all. He believes the promise of 9, 000 new apartments and 12, 000 new jobs in the Olympic park alone to be ‘overambitious’.

He could be right. The London Chamber of Commerce and Industry made the assumption in a report that it would be eastern Europeans who would benefit most. They are prepared to work harder for less money.

The London authorities wanted to reshape Clay’s Lane even before the decision on the Olympics was taken. ‘The merit of the games is merely that it has accelerated the whole process,’ suggests the journalist. London achieved precedence over Paris because the urban planning concept won the Olympic committee over. 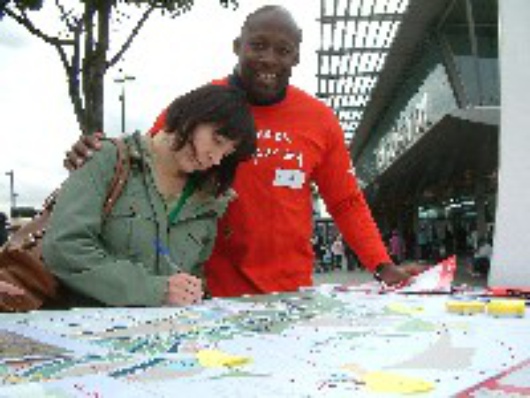 As for John Joyce, he says he doesn’t expect much from the Olympics. ‘I would profit most by selling my house,’ he says. The price of land has climbed rapidly. Joyce is content though. He wants to enjoy his retirement and continue walking. He is looking forward to 2012 and is hoping he will still be offering tours during the games themselves, from 21st July to 12th August. Then, of course, there’ll be a bit more to see.