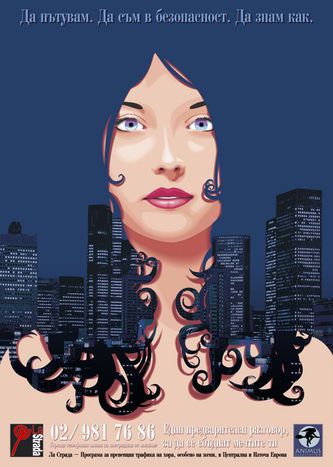 Of prostitution in Warsaw

In Warsaw the attitude towards prostitution is somewhere between denial and discretion. The capital of the country that has best withstood the financial crisis seems to be seeking a way to offer new attractions to western society through meticulous cleanliness

‘There's none of that here,’ Dawid hastily answers while looking down at his suede boots. Questions about prostitution and human trafficking in Poland seem to be out of place here. The 22-year-old looks impeccable and blends in perfectly with the area surrounding Warsaw's palace of culture and science. Early on in the night the atmosphere is set with young people decked out in H&M clothing. The glass roof of the stadium constructed for the euro 2012 football championships looks like a spotlight. Bright neon lights create looming shadows from the enormous structure. Dawid crosses Jerozolimskie Avenue, passing a ‘night club’ sign a few feet away.

No visa no problem

In Warsaw the public consensus towards prostitution is somewhere between denial and discretion. Being the capital of the country that has best withstood the financial crisis, it appears to seek a way to offer new attractions to western society through absolute cleanliness and tidiness. ‘Prostitutes are not visible,’ says Alexis Ramos, a young American who is doing her thesis on the European legislation on human trafficking at the college of Europe in Natolin. ‘Although trafficking still exists from here to the west, Poland has almost entirely been converted into a transitory place, or the destination for human trafficking when before it was the country of origin.’

46% of this illegal activity of human trafficking is related to prostitution. In the list of the current nationalities that have Poland as their final destination, the borders have clearly moved towards the east from recent trafficking from Asia, principally Vietnam, to neighbouring states such as Bulgaria or Romania. ‘Moldova is the main country of origin of trafficked humans in present day Europe,’ says Ramon, before he adds: ‘and of course, Ukraine.’

The relationship between Poland and Ukraine has always seemed to enjoy special legislation. In the euro-enthusiast Kiev, such as that of ex-president Yulia Timoshenko (who is currently in prison due to alleged abuses of power), Poles ceased to require a visa in return for assistance in their preparations with their entry into the European Union. ‘It is easier to acquire a visa for Poland than for any other European union state,’ states Marina, 22. She was in Rivne and knows exactly what it´s like to be a Ukrainian immigrant in Warsaw.

Fall of USSR linked to rise in prostitution

‘The first time I came to Poland I did so with a tourist visa,’ says Marina. ‘After that I returned for a year as a beauty and esthetician student, although I never studied. I started to look for work without knowing a word of Polish.’ Marina highlights the existence of mafia rings in the embassies that traffic these young Ukrainian women, and also underscores the distrust of the Polish authorities towards their fellow compatriots. ‘I never thought of becoming a prostitute. I looked after elderly people and children, and then got a job in the logistics industry. However, every time I go through customs the police at border control are always suspicious.’

The fall of the USSR in 1991 and the subsequent impoverishment of families caused a massive increase in human trafficking from eastern Europe. ‘Bulgarian and Ukrainian prostitutes have now been in Poland for more than two decades,’ says Joanna Garnier. She is the head of La Strada, an international organisation which is located close to the main campus of the polytechnic university of Warsaw. La Strada has been working for the prevention of human trafficking in the Netherlands and different part of eastern Europe for the last eighteen years. ‘Of the 200 cases of human trafficking that we dealt with in Poland in 2012, 90% were women. The majority were sex workers originating from Bulgaria and the Ukraine.’

Garnier, along with her team at La Strada, strive to promote their prevention programme in schools, orphanages, other NGOs and even in psychiatric hospitals. ‘We had a meeting in a Ukrainian church in Warsaw two weeks ago in order to offer information to those women who needed help,’ she says. ‘None of the women who were present requested assistance but I´m certain that some of them are being forced to prostitute themselves.’ Marina confirms this suspicion. ‘There are girls from my country who assure their families that they are working as cleaning ladies when in reality they are prostitutes. In Rivne there are rumours that I'm a hooker because I make money here.’ These suspicions follow Marina back to the Polish capital: ‘One landlord refused to rent me an apartment when he heard my foreign accent because he thought I would turn it into a brothel.’

Prostitution legal in Poland - without pimps

Despite the reluctance to recognise prostitution in Poland, selling one's body is not prohibited in Poland. Prostitution is legal in the country as long as the prostitute does not work for an intermediary, in other words, a pimp. ‘This is the only profession which does not require the worker to pay taxes,’ explains Ramos. ‘Workers must show photographs of their clients or testimonies that they work in this field before the administration.’ This is not a common procedure. ‘Girls trust people more than institutions,’ admits Garnier. ‘A short while ago we dealt with a case of a Bulgarian girl in her twenties who was offered work here in agriculture. She had already been in Greece working harvesting vegetables. One of her family members introduced her to a trafficker in Bulgaria, and once she arrived in Poland she was forced to work as a prostitute on the motorway. When she refused to do so, she was beaten.’

A victim of its own silence, Warsaw is trying to avoid being identified as a destination for sexual tourism at all costs. The intense border controls carried out during Euro 2012 remain as proof. While even if it is true that these shadows are only visible in the streets surrounding the metro station Politechnika, pamphlets for the ‘night clubs’ still flood the main street of Nowy Świat or Jerozolimskie Avenue that lead to the national stadium of Poland. This tarnishes the image of  Warsaw and its unachieved utopia.