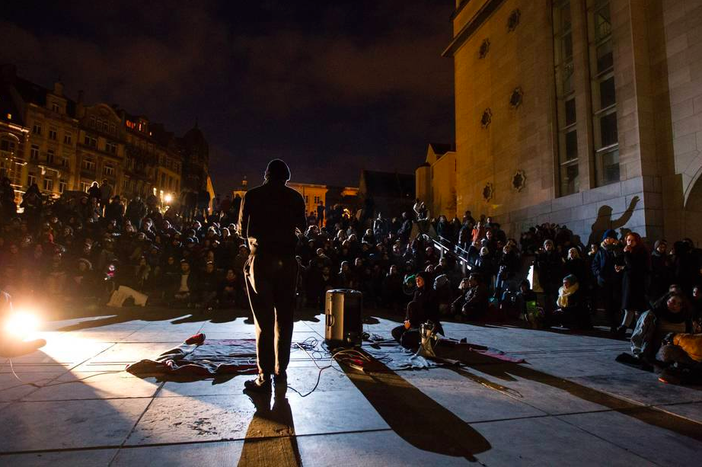 Last night was March 44th on the protest calendar. Unlikely? Not any less than a public and democratic debate, free, with almost no rules but no abuses, right in the middle of the public space. Last night we were on the steps of the Mont des Arts in Brussels, for the 8th “Nuit Debout” protest night in Brussels. We met some of them.

We made our way in the middle of a hundred people, all here gathered around a team settled on the first steps and being the “hard core” of the participants, the “nuit-deboutistes”. Speakers take their turn at the microphone, lit in the encroaching night by spotlights. They appeal to their audience, question them regarding public debt, the fundamental right to access art and education, energy production, and the decaying life conditions or even the fact that bike lanes are so narrow in the city centre.

The stage is set, and you could easily think that you are standing in the middle of an Athenian amphitheatre. The way the place is set was wisely chosen and reminds us of an auditorium, looking like a forum, a place for a reviving republic. The setting leads people into talks, peaceful exchanges, attentive and curious, people holding their beers and cigarettes.

“People do not want a structure, but we must stay careful as well. The subtlety is to find a way to get organised”, says Jean-François, 42-year-old. Indeed, even being hostile towards too strict “internal rules of procedure”, public speaking and debates are very well organised. On this night, Aurélien, a 19-year-old journalism and communication student is in charge of coordination. You need to go and see him if you want your name to appear on the ultimate post-it note and get the right to speak for 2 minutes at the microphone.

It is the golden rule to moderate the debate, only one speaker at a time and the instant reactions are expressed through a very specific gestural code and regularly reminded of during “technical meetings” in between interventions: you raise your hand and shake them if you agree with the speaker. You make a cross with your arms in front of you if you disagree with the speaker. For a deeper reaction, you need to wait for your turn on Aurélien’s post-it note.

In general, this way of doing things is okay for most of those attending, and they are proud to see that no censorship is necessary and that everybody is complying with a minimum set of conventions. Jean-François laments a single inconvenience in this system: “The debate often starts, grows bigger and gets really intense, and suddenly someone who had their name on the list starts speaking because it is their turn and talks a bit too much about them and then the debate is not as good as it was before, it is a pity”.

The use of public space is very respectful. Bin bags (blue for cans and white for the rest) were placed around so that there would not be any detriment to the place. And when the sun rises again, there is no sign left of the democratic exchanges which took place during the night. During the “technical meetings”, Aurélien reminds people that Nuit Debout is not about vandalism and they condemn the fact that some graffiti is left after the night on the steps and on some tree trunks. They prefer their poetic slogans written on their banners, such as: “They say you should sleep on it to have a clearer picture, but we are the night and we are not feeling sleepy!”.

Brussels’s meetings are starting to be organised. And a small communication unit was created to boost the movement which is only making its first steps, and to inform the participants night after night of how the movement is going and of the projects. Decisions are written down by a “scribe” who is in charge of taking notes during the public speaking and votes by show of hands. A commission for actions has also been created following the Parisian model. But up until now, only a very few initiatives have been started.

But why? Because for the moment it is still a catch-all for ideas and claims. The future is yet to come.

“We need to be together and, to meet each other. And that is why we are here tonight and not on Facebook or watching TV”. Because in the end, it is thanks to these meetings and the idea of being together which inspires participants of the movement. We wanted to be part of it.

Miriam, a 38-year-old psychologist just spoke on the microphone. She came every night from the start. And she speaks to raise awareness on the matter of the power of the public debt and the responsibility of States to put in all their resources to pay back, allowing them to act in favour of education, social and artistic development. Her motto: “Debt or life, make your mind up!”. For her, Nuit Debout is looking “for a more human than political finality”.

Pascal, a 33-year-old scene technician testifies: “There is a desire in people coming here to (re)build something”. For him, Nuit Debout “is the first steps of an emerging parliament”.

Jean-François, 42 years old, explains that “Nuit Debout is not about taking the whole system down to rebuild it after. It is rather like we were all in prison and we discovered freedom again. People are going out of their homes and realising that they are not alone in coming down this path”.

Melissa, a 21-year-old student in her third year in a journalism school came with 2 friends to film for a documentary for her final year exam. She is surprised that nobody from the local or national press is here. Who knows? Maybe they are still around Place de la Bourse.